From the Mediterranean to the Himalayas from Shapero Rare Books 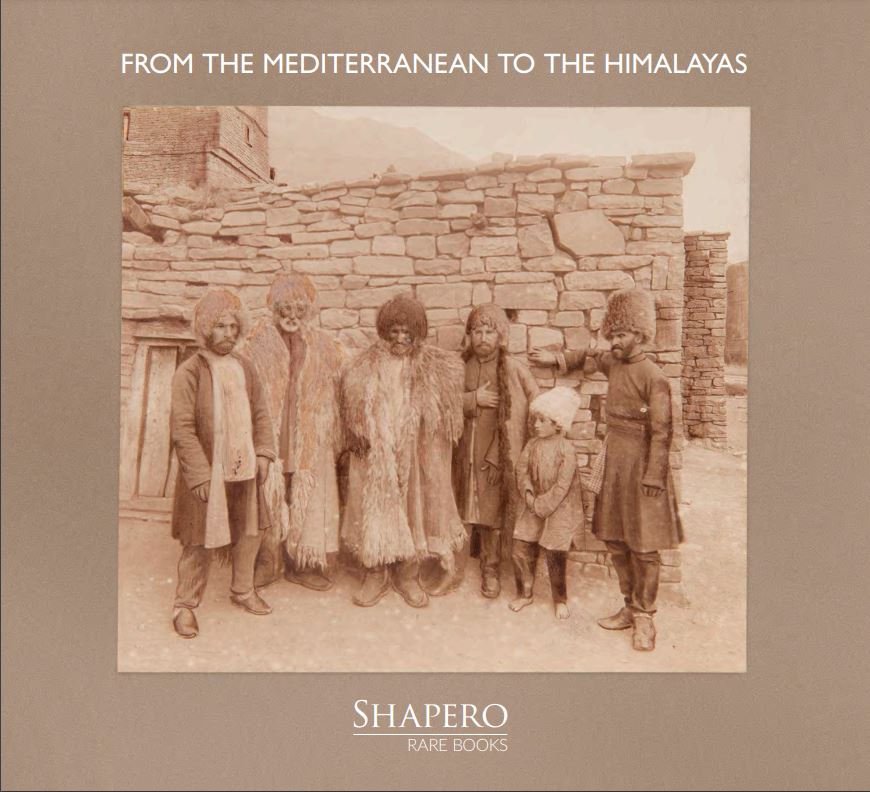 From the Mediterranean to the Himalayas.

Shapero Rare Books has issued a catalogue entitled From the Mediterranean to the Himalayas. This is a catalogue of travels and what the travelers saw. As the title implies, they not only traveled great distances, but, at times, to great heights. Most of these journeys were not easy as they occurred long ago. The majority of travelers were English, but some were from other parts of Europe. There are even a couple where the travelers came from far away to see England, a reversal of the norm. Westerners weren't the only ones to experience culture shock when they traveled far away. These are a few of these items ranging thousands of miles wide, and up to 29,032 feet high.

We will start from the high point. The book is Through Tibet to Everest by Capt. John Baptist Lucius Noel, published in 1927. Noel served with the British military in India, near the Himalayas. In 1913, he traveled to Tibet in disguise, getting to within 40 miles of Everest, the closest yet of any foreigner. After the war, he left the military, and following a meeting with the Royal Geographical Society, he joined the 1922 Mt. Everest expedition. Noel went along as the photographer. The mission reached almost 27,000 feet, a record at the time. Four attempts were made before an avalanche killed several men and they all returned home. Noel and several others returned to the mountain in 1924. This time Noel planned to film the event. He did, and created a film, but they did not reach the top this time either, although setting a new record at 28,126 feet. This attempt was noted for the disappearance of notable mountain climber George Mallory, on his third Everest mission, and Andrew Irvine. They did not return from their attempt at the peak. Mallory's last message was received by Noel. Mallory's body was finally discovered in 1999. Noel recounts the two missions and his attempt to reach the mountain in 1913. Item 128. Priced at £250 (British pounds or approximately $283 in U.S. dollars).

Charles Masson was serving in the military of the British East India Company (the company ruled India with its own army) in 1827 when he deserted. He joined up with a private small army of Josiah Harlan in Afghanistan but deserted that too. He stayed in Afghanistan and began discovering and excavating ancient sites, amassing a large collection of coins and other items from antiquity. Meanwhile, he was forgiven by the British so he could serve as their agent in Kabul. The result was that he was later able to write these books about his time in Afghanistan, Narrative of various journeys in Balochistan, Afghanistan, and the Panjab: including a residence in those countries from 1826 to 1838, together with Narrative of a journey to Kalat, including an account of the insurrection at that place in 1840; and a memoir on eastern Baluchistan, published in 1842, 1843. Those years were a time of growing instability in Afghanistan. It has long been a nation of warring tribes whose one common thread is keeping out foreigners. At this time, the British were becoming increasingly concerned the Russians might try to seize India from them and decided to take over Afghanistan as a buffer between the countries. Masson recognized it was not a good idea, but the British went ahead and began the First Afghan War, a war that ended in defeat for the British, with virtually all the British men and their allies in Kabul slaughtered or frozen to death attempting to escape over the frozen mountain passages. Item 92. £4,000 (US $4,587).

Heinrich Schliemann was an adventurer, entrepreneur, wealthy businessman, and finally, an amateur archaeologist. He made a fortune in the California Gold Rush and another in Russia. Finally, he retired and devoted the rest of life to excavating ancient ruins in Greece and the area. He sought to establish that ancient Greek writings were based on historical fact. It was Schliemann who identified the site of ancient Troy. He was an amateur archaeologist and it was said that he destroyed almost as many artifacts as he found, but nonetheless he uncovered much from antiquity at a time when archaeological exploration was still very limited. Item 37 is a set of Schliemann's five works, Troy and its Remains, Mycenae, Ilios: the City and Country of the Trojans, Troja, and Tiryns (1875, 1878, 1880, 1884, and 1886), and Schliemann's Excavations: an Archaeological and Historical Study, by Dr. C. Schuchhardt (1891). £8,500 (US $9,777).

This is a book by another adventurer. His name was John Fryer Keane, and as a young man, he went to sea. His travels took him to many places around the world, China, India, South America, the Arctic among them. He then got off in Jeddah, where his new employer allowed him to join a group on a pilgrimage to Mecca. Only Muslims are allowed to do so which is why only a handful of westerners, most notably explorer Richard Burton, had done so before him. Keane was a Christian but had served with Muslims at sea and in his current capacity and learned how to do the prayers and spoke Hindustani. He adopted the name Hajj Mohammed Amin and passed himself off as an Indian Muslim. When someone became wise to his real background he professed to be a convert. It remains a question whether he really did convert or was just faking it. After his trip to Mecca he followed up with one to Medinah. He wrote about each. Item 51 is his second book, My Journey to Medinah: describing a Pilgrimage to Medinah, performed by the Author disguised as a Mohammedan, published in 1881. £600 (US $691).

This is an unusual and remarkable item from Afghanistan. It is an illuminated manuscript of Tarikh’i Iskandar (The History of Alexander). It was created in 1874 in Kabul by a scribe named Ibn Muhammad Khan Safdar ‘Ali. The book is an account of Alexander the Great, from his beginnings in Macedonia to his triumphs from Egypt to India, and his death and burial in Alexandria. It was originally assembled by James Campbell and this manuscript is believed to be a Farsi translation of Campbell's work. What is unusual and possibly unique is the calligrapher's use of marbled borders around the text. Marbling has been used in books for centuries but not in this manner. The only other recorded example is one also created by Safdar ‘Ali, an obscure 19th century scribe about whom little is known. The manuscript contains 119 leaves and was previously owned by Begum Iskandar Mirza, wife of the first President of Pakistan. Item 1. £30,000 (US $34,615).