The Latest Collection of the American West from Old West Books 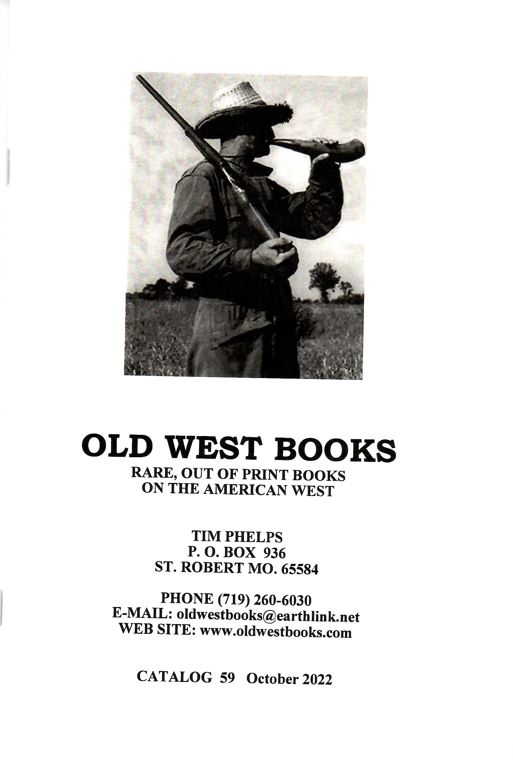 Old West Books has released its latest collection, Catalog 59 October 2022. It really isn't necessary to describe what sort of books you will find in an Old West Books catalogue, because... The American West still fascinates people not only in America but all over the world. Its characters were bigger than life, and you will find these mythical figures along with the real people who settled and lived there in this selection. That is the rest of the story and it was as fascinating as the myths and exaggerations of the Old West. Here are a few of these books.

Here is a biography of a man whose life bordered the divide between legendary and real. His name was Charley Reynolds and he led an exciting life, but he was also a quiet man. That's why you probably never heard of him. He lacked the self-promoting tendencies of some of the Old West characters. He was a Pony Express rider while still a young man, then served for the Union in the Civil War, and after that headed west, and drifted from one role to another. He became noted as an exceptional guide and marksman. Reynolds scouted with Buffalo Bill and for various military leaders. One of them, with whom he unfortunately became close, was General George Armstrong Custer. He brought the message from Custer of the discovery of gold in the Black Hills to the world. He was also with Custer that fateful day at Little Big Horn. He had a premonition the night before that it wouldn't go well. He is said to have become very depressed, gave his possessions away to other soldiers, and hit the whiskey bottle, something he did not often do. He wasn't with Custer himself for the final battle but was with Major Reno. The outcome was the same. Fifty-eight empty cartridges were found by his body. He gave it his all. Item 46 is Charley Reynolds Soldier, Hunter, Scout and Guide by John and George Remsburg. published in 1931. Priced at $375.

Speaking of the illustrious General George Armstrong Custer, item 68 is a the first biography of that star-crossed commander. One can't question his bravery, or his foolhardiness. He was good at self-promotion and that may have been his downfall, as he uncautiously sought a great victory. It was best not to serve under him. The book is A Popular Life of Gen. George A. Custer, published in 1876, three months after his last stand. The Popular Life was a popular book as the public wanted to learn more about Custer and his “last stand,” a fascination for this character of the Old West that endures to this day. $575.

This is not how the average person experienced the Old West. This is an account of a hunting expedition by a group of businessmen from the East in 1871. Their hosts were Civil War General and later Indian fighter Philip Sheridan with Buffalo Bill Cody as chief scout. They were escorted by 100 cavalry men. They took along 16 wagons (Cody said 25 but he was prone to exaggeration) to carry their baggage and supplies, including one loaded with ice (Cody said three). They ate fine food on china, with glassware and linen tablecloths. The drinks flowed at night. They brought lots of weapons, and Old West notes, “the party shot just about everything that walked or flew.” That included 600 buffalos and hundreds of elk, antelope, and wild turkeys. The book is Ten Days on the Plains by Henry E. Davies, published in 1872. Davies was a prominent New York attorney and a member of the hunting party. Fewer than 50 copies were printed with most given to other members of the group. This one was a presentation copy given to R. W. Cameron, likely New York and Canadian shipping industry businessman Sir Roderick William Cameron. Item 18. $7,500.

If you think that western trip was decadent, a year later some of the same list of characters headed up an even more extravagant affair. This show was put on not for a group of rich people but one celebrity in particular. The title is His Imperial Highness the Grand Duke Alexis in the United States of America During the Winter of 1871-1872 by William W. Tucker, published in 1872. Alexis was the fourth son of Russian Tsar Alexander II, meaning he was in line for the throne but unlikely to ever reach it. Again, General Sheridan was a host, Buffalo Bill the scout, but another name was added to the list, one we have heard before. George Armstrong Custer was there too, already well-known in life, but not as famous as he was in death. Custer was an ingratiating man and he and Alexis remained friendly for the rest of Custer's short life. There were also Indians who put on horsemanship displays and, of course, buffalo hunting. Winter was a tougher season so they brought along luxurious tents with oriental rugs to keep their feet warm. The meals were again outstanding, and Coca-Cola not yet having been invented, they had to settle for champagne. This was actually only one step on Alexis' tour as he met President Grant in Washington, Theodore Roosevelt, Sr., the future President and western rancher's father, in New York, hit Boston, Philadelphia, Niagara Falls, Canada, and Chicago, and on his way back, New Orleans. This was author William Tucker's personal copy with his notes, but the inscription signed “Bill” does not look like the author's handwriting. Old West believes it most likely is that of his son, also William Tucker. Item 63. $15,000.

This has been described as “the finest effort ever made by a prosecutor.” It didn't matter. Item 65 is the Closing speech for the state made by Wm. H. Wallace, Esq., prosecuting attorney of Jackson County, Mo. In the trial of Frank James for murder... published in 1883. The James Gang had been whittled down by law enforcement and shootouts. Then, his more notorious younger brother, Jesse, was killed by a new gang member for the reward. Frank had enough. Tired of running, he surrendered to the Governor of Missouri. In return, the Governor agreed not to extradite him to Minnesota where the people were more hostile to the gang and a murder trial awaited him. He instead was tried for a murder in the friendlier confines of Missouri. The result was despite this elegant prosecution the jury acquitted him. James was true to his word this time. He never again engaged in crime, taking on unexpected jobs like shoe salesman and theater ticket taker. He later toured western shows with former comrade Cole Younger and late in life gave tours of his home, dying of natural causes at the age of 72. Item 65. $3,500.

Old West Books may be reached at 719-260-6030 or oldwestbooks@earthlink.net. Their website is www.oldwestbooks.com