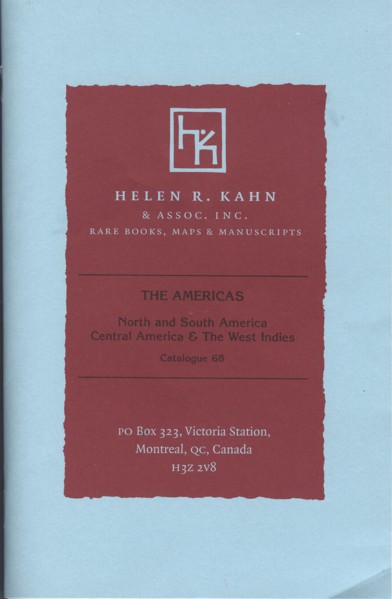 The Americas from Helen Kahn.

Helen R. Kahn and Associates Rare Books have issued their 68th catalogue of The Americas. This one is spectacular. It is filled with travel books, many of which I never knew existed. If you are interested in explorations, primarily in North America, but a few to the south, you need this catalogue. Being a Canadian bookseller, there are a few more journeys to the frozen far north than to southern plantations, but there is plenty of material pertaining to travels on both sides of the 49th parallel. Still, I can't help but wonder why so many people felt compelled to spend years surveying the God-forsaken cold of the Arctic. What were they hoping to find there? So many succeeded in finding little but their own mortality in the bitterly cold expanses of ice, but their adventures are riveting and make most interesting reading from the comfort of our well-heated homes.

Many of the books tie together the not always easy relationship between North America's two large nations. In the early days, the split was more between the British and French empires, much of the continent belonging to France until the end of the French and Indian War. With the American Revolution, the division became the U.S.-Canadian border, and there are numerous books concerning those skirmishes, which were for the most part resolved after the War of 1812. There are also numerous books on the Indians, frequently referred to as "savages" by those who savagely stole their land, and, of course, the requisite "Indian captivities." Here are a few of the titles within this fascinating, thoroughly described catalogue of the Americas.

Alexander Mackenzie traveled through the wilderness of Canada to the Arctic Circle in 1789. Much of the trip followed the river today known as the Mackenzie, which flows north from cold to colder. However, his trip four years later was even more significant. A dozen years before Lewis and Clark, Mackenzie was the first to cross North America by land north of Mexico. Following a series of rivers as well as overland and over mountain trails, he made it down the Bella Coola River to an inlet from the Pacific. He painted his name and date - July 22, 1793 - on a rock ("Mackenzie's Rock") to show where he arrived. While Mackenzie was an explorer, his travels were financed by the North West Company, looking to break into the fur trade dominated by the Hudson's Bay Company. Item 69 is an 1801 first edition of his Voyages from Montreal, on the River St. Laurence, through the Continent of North America, to the Frozen and Pacific Oceans, in the Years 1789 and 1793.... Priced at $7,000 (all prices in U.S. dollars).

Item 3 is an important piece concerning the Louisiana Purchase, Histoire de la Lousiane et la Cession de cette Colonie... (History of Louisiana and the cession of that colony by France to the United States). It was written by Francois Barbe-Marbois, who helped negotiate the treaty for France. One point that the author makes clear is that French claims for the territory ended at the 110th meridian. This runs roughly along the Rocky Mountains. The map in this book contradicts claims the United States would later make in its territorial disputes with Great Britain, that it purchased the rights to the Oregon Territory, which is west of the 110th meridian, when it purchased Louisiana. $1,500.