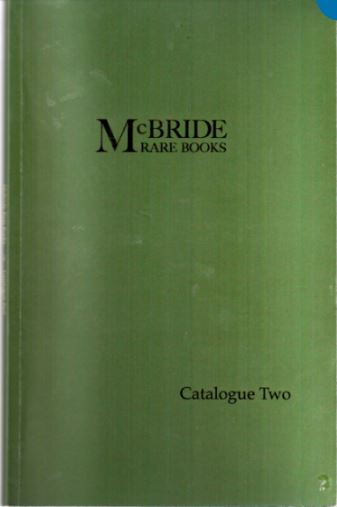 McBride Rare Books has returned for their second printed catalogue, appropriately named Catalogue Two. They don't list a particular subject but what you will find is much in the way of Americana, particularly the American West. That bleeds south of the border with many items from Mexico. Perhaps we can call their territory the North American West (although a few items come all the way from South America). There is much in the way of ephemeral material here – photographs, letters, manuscripts, posters and such. It is an exciting collection of items from this corner of the world. These are a few selections.

If you like to get letters this is a lot you will appreciate. It contains around 200 of them, over 600 pages. They were written by Union Civil War Second Lieutenant Lemuel K. Westcott of Illinois. Most are to his wife, some his father, and the archive includes five photographs, other documents, and most transmittal envelopes. They cover the years 1862-1866. Westcott served with Sherman as he crossed Georgia. He speaks harshly of the Battle of Kennesaw Mountain. He writes that their “troops were driven back in confusion having suffered severely and inflicted comparatively little loss upon the enemy... The manner in which our troops were put into the fight was absolutely criminal. Closed in masses and exposed to fire they could not return, they were cut down by the hundred.” It didn't slow down Sherman who continued to press on with his March to the Sea. Oddly, a few weeks earlier, Westcott managed to get home and marry Sara Marie Adams, recipient of most letters. After the war, Westcott was sent to Texas to restore order. He writes, “The majority of Texans I have come in contact with are the kind that are carrying weapons and drinking whiskey.” Item 17. Priced at $24,500.

This publication has an odd title: Free Church Alliance with Manstealers. Send Back the Money. It was published in Glasgow, Scotland, in 1846. The Free Church of Scotland had broken off from the Church of Scotland. They needed funds for buildings and clergy, and found willing supporters among Presbyterians in the American South. This booklet reports on the words of several speakers, most notably escaped American slave and great orator Frederick Douglass. Douglass was drumming up support in Britain for his abolitionist cause while keeping himself away from slave catchers in America who might capture him and return him to bondage. The explanation for this odd title is that Douglass was urging the Scottish church to return the contributions from American Southerners on the grounds this was dirty money. Douglass said that had his master sold him and given the money to the church fundraisers, they would have brought the money back to Scotland to pay for their churches and ministers. Item 1. $6,500.

Douglass was still fighting slavery in the American South in 1846, but by then, it had been abolished south of the border. Item 4 is a broadside decree that Abolida Sin Excepcion Alguna la Esclavitud en Toda Republica... (abolished without exception slavery in all republics). It was announced in this broadside from the Minister of the Interior in 1837. Slavery had been abolished in some Mexican states after the revolution in 1822 and mostly through federal legislation in 1829, but there were still some exceptions. The most notable exception was Texas where immigrants from the American South had brought their slaves. The Texas Revolution assured that slavery would remain legal in Texas but Mexico did not recognize Texas' independence. From their point of view, Texas was still a part of Mexico and as a result, this decree abolished slavery in Texas. That can be seen by the fact that this decree provided for slaveholders in other parts of Mexico to seek compensation for the freed slaves but slaveholders in Texas were not so permitted. Naturally, none of this had any effect on the ground in Texas where slavery continued until after the Civil War. This copy of the decree was bound together with other documents pertaining to a compensation claim of a slaveholder in Veracruz. $15,000.

Next we have an amazing panoramic photograph. Its caption title reads Sinclair Oil and Gas Co. West Kisner. Roxana Pet. Corp. Schroeder Lease. Garber-Covington Field, June 24, 1926. Photo from Top of Kisner No. 12. Roxana was a subsidiary of Royal Dutch Shell. This was from the boom years in oil exploration in Oklahoma, the field being located about 20 miles south of Enid. The picture displays the flat land covered with oil derricks. There are about 130 of them jammed onto the section of land. It requires the full 8” x 39 1/4” to display them all and it looks like there may have been even more derricks beyond the image's borders. Item 53. $1,500.

Have you ever wondered what the Methodist women of Chickasha, Oklahoma, were preparing for dinner a century ago? No? Perhaps this is what they were preparing for their husbands working in the oil fields. Item 20 is a cookbook prepared by the “ladies of the Woman's Home Mission Society and their friends” circa 1910. It has some standard fare, plus recipes for pickles, omelets, canned fruit, sandwiches, and “a heavy dose of desserts.” There is a recipe for “Peanut Sandwiches” (perhaps a precursor to peanut butter), shrimp, oysters, and three separate ones for salmon loaf. All of these seafood recipes for landlocked Oklahoma seems a bit unusual. They must have been a delicacy. Item 20. $750.

This is a 1932 wanted poster, complete with three photographs of five people. The heading reads, WANTED for Murder and Rape. Under the pictures come the details: “I hold two felony warrants, each for Clyde and Melvin Barrow, who on June 23rd shot and killed Marshal Henry Humphrey while he was trying to arrest them on a robbery charge and on the next day, June 24th, they went to the home of Mrs. Frank Rogers, tried to take her auto, and raped her.” The rape charge was dubious, the killing not. The killer was Clyde's less well-known older brother, Marvin “Buck” Barrow (not Melvin). Buck would die a month later after a shootout, while Clyde and Bonnie Parker would hang around another year before dying in their shootout. The pictures are of Clyde, Buck, Bonnie, Buck's wife Blanche Caldwell Barrow, and an unnamed associate, later identified as W. D Jones. Jones left Bonnie and Clyde a few months later and served 6 years before being paroled. You know what happened to the other two. This poster was prepared by Sheriff Albert Maxey of Crawford County, Arkansas. Item 49. $4,500.