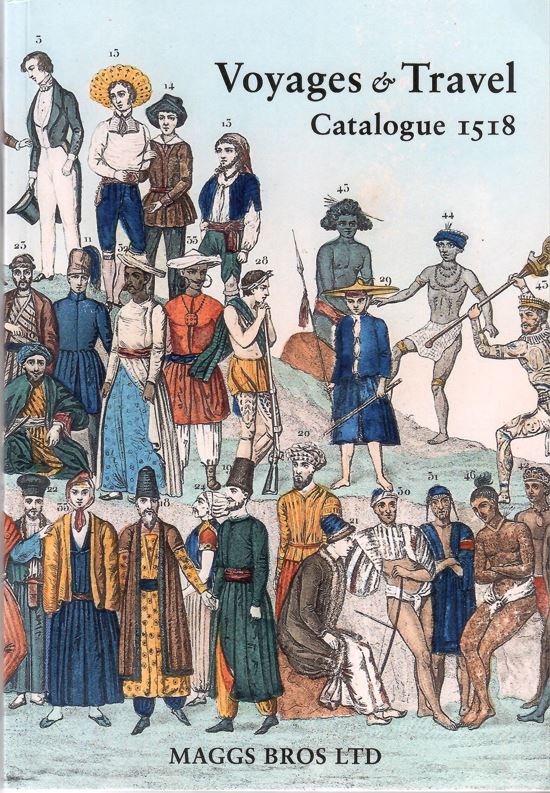 Maggs Bros. has issued their Catalogue 1518 (they've been around a long time), titled Voyages & Travel. The destinations of these travels are still there but most bear little resemblance to what is seen in these books. Neither are the modes of travel much like they were in these books. They are mostly very old journeys, centuries ago, and the descriptions and images the travelers brought home are of a world very different from today. It makes these accounts fascinating when a trip that takes a few hours by plane today took days, weeks, months, even years, and the hardships and risks were such that few could endure today. Here are some of these books from times when the world was a much larger place.

Since coronations are in the news today, we will begin with a coronation from long ago. The figure involved was hardly an important person in 1930 when the event took place but he would become a major figure on the world stage a few years later, and even now is of great significance far from his homeland. The location was Addis Ababa and the man receiving his crown was Haile Selassie. Selassie was being crowned Emperor of Ethiopia. Item 14 consists of 33 photographs, along with newspaper clippings, invitations, a typescript, and various ephemera. It was created by E. O. Springfield who was part of the British delegation. In an era when Europeans tended to look down on others, Springfield writes, “I would like to preface my remarks by saying that I don't want to try and make fun of it all in any way whatsoever. We were most hospitably entertained from the moment we left Djibuti and the Ethiopian Government spared neither trouble nor expense to put up a good show, and I feel that everyone will agree that they succeeded.” Selassie became a renowned figure in 1936 when Ethiopia was attacked and colonized by Fascist Italy. Italy didn't have much of an empire and Mussolini wanted to match the other European powers. Ethiopia had managed to avoid colonization because it was a Christian nation so it was the best target remaining. Selassie appealed to the League of Nations for protection in one of the century's most important speeches, but the world effectively did nothing and the nation remained under Italian control until the Fascists were thrown out during the war. Today, many of Jamaica's Rastafarians believe Selassie is the Messiah, though he was a Christian. The Rastafari religion believed the Messiah would be a great African leader and in 1930, Selassie was the one who fit the bill. Priced at £5,000 (British pounds or approximately $5,705 is U.S. dollars).

Next is a report of good news that, in hindsight, is filled with irony. It is also a testament as to how slow world communications were in the days before wireless transmission. It is a broadsheet put out by London's The Morning Herald on September 22, 1789. Headlined The Bounty Armed Ship, it reports news from HMS Bounty. It says that the Bounty “has made good her voyage to the Society Islands.” The news continues, “The Bread Fruit Trees remaining on board were in so prosperous a state, that Lieutenant Bligh proposed to himself the gratification of conveying them safe to our West India Settlements.” In hindsight, not a good choice. Bligh's mission was to bring breadfruit trees to the British Caribbean plantations as their large fruit could feed a lot of slaves. Ultimately, the slaves refused to eat it. The dispatch was likely created while the Bounty was in Tahiti. It left on April 5, and on April 28 the most famous mutiny at sea occurred. The Bounty was overtaken by mutineers and Bligh and his remaining loyal sailors set off on a 4,000 mile voyage in the longboat to rescue. The report traveled by ship to Buenos Aires, then to Lisbon, and finally to London, explaining why Londoners were still receiving this good news 5 months after the mutiny occurred. Item 59, £1,250 (US $1,427).

This is a set of five hand-colored lithographs published by Benjamin Russell in New Bedford, Massachusetts, in 1872. New Bedford was home to a large whaling fleet. They are captioned The Abandonment of the Whalers in the Arctic Ocean Sept. 1871. Declining whale populations had forced the whalers to move farther north but that meant shorter seasons. That of 1871 was particularly short and the whalers found themselves being trapped in the ice. The only open channel was along the water's edge but that proved too shallow for most of the ships to escape. Seven ships managed to get out but 32 were trapped. They tried to remove everything they could to lighten their weight but still those ships could not escape. There were 1,200 on board, including some women and children, without adequate food and clothing to survive the winter. Meanwhile, four of the boats had already been crushed by the ice. The only option was to abandoned the ships, take the long boats, and travel 70 miles to where they could meet up with the seven ships that escaped. That they did and without the loss of a single life, but the New Bedford whaling industry was badly damaged and never recovered. Item 101. £5,000 (US $5,705).

There were more challenging escapes than 70 miles in a lifeboat. Robert Coverte was on a mission to India on behalf of the nascent British East India Company in 1607. There were two ships, which became separated. Coverte was on the Ascension. They made it around the Cape of Good Hope and all the way to India but the ship became grounded approaching Surat. They had to abandon it and the men went in different directions. Coverte and a few others decided to make their way home overland. In the early 17th century, the lands through which they had to travel were not well known and the receptions they would receive were at best uncertain. However, Coverte survived his adventure traveling through India, Afghanistan, and Persia to the Levant, from which he was able to return to England. He departed India in January 1610 and made it home in April 1611. His account is A true and most incredible Report of an Englishman, that...travelled by land through many unknowne Kingdoms and great Cities... This is a second edition, published in 1614. Item 16. £12,500 (US $14,295).

For those who justify slavery as being a paternalistic institution, the slaves knew better. Item 94 is a first-hand account from an escaped slave who was known as Fed, but took the name John Brown for obvious reasons. He wrote about his experiences in Slave Life in Georgia: A Narrative of the Life, Sufferings, and Escape of John Brown, a Fugitive Slave, Now in England, published in 1855. He only saw his father, who lived on another plantation, once. After his mistress died, he was passed to a daughter. When he was 10, she sold him. He never saw his mother again. He described his new master, who owned him for 15 years, as “savage.” He was then given to a doctor who performed terrible experiments on him. He was placed in an extremely hot pit until he fainted, a process repeated every few days while the doctor tested new medicines. Brown made several attempts to escape, finally succeeding and making it north. When the Fugitive Slave Law was passed in 1850, he realized he needed to get out of the country. He sailed to England and never returned. While there, he dictated his story to Louis Chamerovzow, editor. £6,500 (US $7,436).