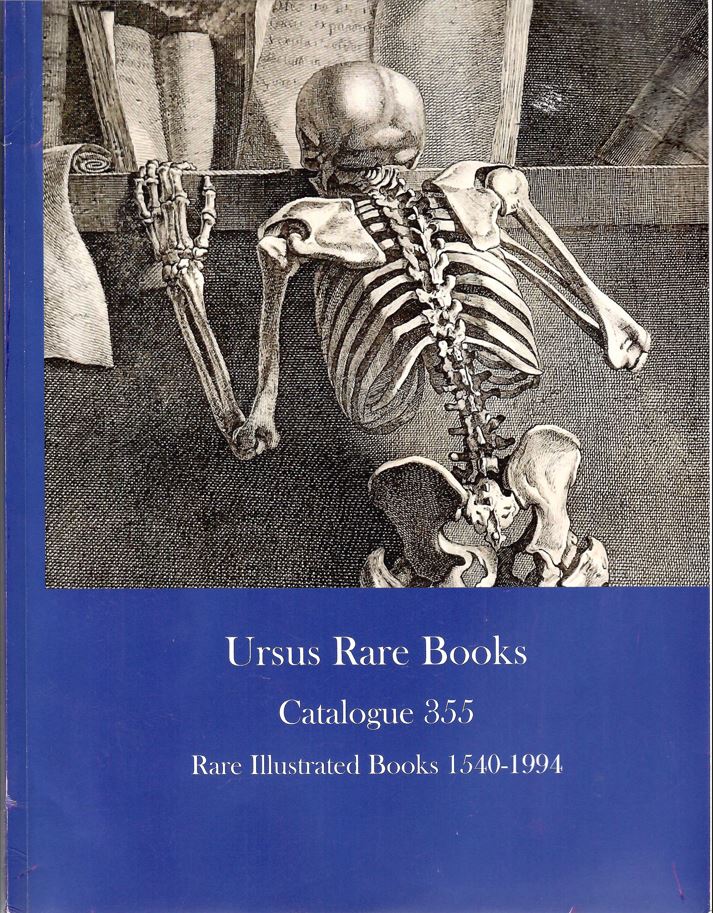 Ursus Rare Books has issued their Catalogue 355 of Rare Illustrated Books 1540-1994. That's almost five centuries of illustrations in evolving styles. Some were meant for beauty, some for teaching. Occasionally, you will find one that served both masters. Certainly we can say these illustrators were highly accomplished with their skills. Here are a few of these books.

We begin with one of the oldest illustrated books in this catalogues, but the images are of people who lived long before even its 16th century publication date. The title is Imagines XXIIII Caesaru a Julio ad Alexandrum... edited and engraved by Donato Bertelli and published in 1573 (shouldn't that be XXIV rather than XXIIII?). These are images of Roman emperors from around twenty centuries ago, not quite so long ago when the book was published but still long before. There are no photographs or even portraits of these people but Bertelli was able to gather his likenesses from marble statues. How accurate those were is debatable (they were probably meant to be flattering) but it's the best he could do. Ursus describes them as “expressive” portraits so Bertelli has humanized his subjects a little better than seen in marble. Item 4. Priced at $22,500.

This is a book that introduced China to many in Europe. China was still a mysterious place in 1586, not much known beyond Marco Polo in the West. This book is entitled Dell' histora della China, a 1586 translation of a book first published in Spanish the year before. The author was Juan Gonzales de Mendoza. Mendoza was sent to China by the Spanish crown to report back on what he found. The book covered numerous topics including language, topography, politics, religion, and much more about the country during the Ming Dynasty. Ursus, quoting another's description of the book, says “its publication may be taken to mark the date from which an adequate knowledge of China and its institutions was available for the learned world of Europe.” Item 6. $3,250.

Here is one of those books whose illustrations serve two purposes. It is both an anatomical and artist's guide. Ursus notes, “Gemelin makes clear that his intention is to offer the work of value both to anatomy students and artists and draughtsmen... Gamelin meant to join both art and science in his great work.” Gamelin was Jacques Gamelin, who went to Rome and became a painter for Pope Clement XIV and later returned to his home of Toulouse to undertake this work. He was able to gain access to the corpses of executed criminals from which he made sketches. Some of his illustrations show skeletons acting in ways of the living, such as playing musical instruments (see cover image). It took Gamelin several years to complete his masterpiece which was printed in 200 copies. It bombed. Most of the unsold copies were either pulped or broken up making it very rare today. The title is Nouveau Recueil d'Ostéologie et de Myologie, dessiné d'apres nature (new collection of osteology and myology, drawn from nature), published in 1779. Item 25. $85,000.

It was only 30 years after the first black and white photographic images were introduced to the public that a process for color photography was developed. Item 43 is a pamphlet by Frenchman Charles Cros titled Solution Generale du Probleme de la Photographie des Couleurs, published in 1869. It was based on the idea that you can create all the colors of the rainbow by using the three primary colors, just in varying amounts. Cros used color filters to create negatives based on the amount of each color and then used them to apply the right amount of each color to the positive impression. Oddly, while Cros was developing his process, Louis Ducos de Hauron was developing a similar process independently from Cros and with each unaware of the other's work. Cros later moved on and designed a method to record sounds using the basic principles of the phonograph record, only to find later that Thomas Edison introduced a working model of such a device shortly thereafter. Again, the two apparently worked independently and unknowingly of each other. Item 43. $4,950.

If you would like to know what New York's Broadway looked like at the turn of the last century, you will not find a better book than this. The title is A Pictorial Description of Broadway, published by New York's The Mail & Express in 1899. It includes 74 chromolithographic pages which display Broadway from Bowling Green, where it begins, all the way to 59th Street (which is well over 59 blocks as it first crosses several named streets). It also contains 18 pages of advertisements and a business index. The publisher describes Broadway as “America's most notable thoroughfare.” This reminds me of Edward Ruscha's photobooks of every building along Hollywood Avenue and Sunset Strip, except Ruscha's works were intended more as pieces of art. This one was a practical guide to America's boulevard. Item 49. $9,750.