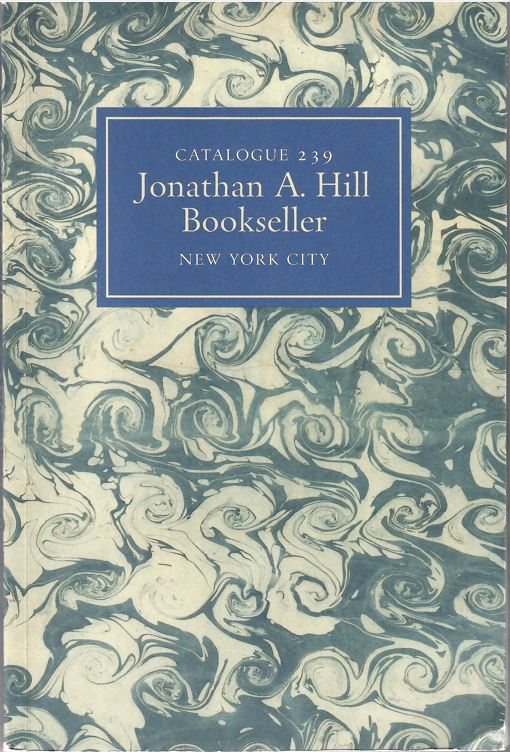 Jonathan A. Hill Bookseller has released Catalogue 239, Science, Medicine, Natural History, Bibliography, & Recent Acquisitions. This selection includes much of a scientific nature, and nothing intended to be fictional, although in hindsight, some of the medical and scientific claims are fiction. The books here are old, mostly very old, so they represent the work of many great minds trying to understand phenomena with very little past learning to lean on. If not always right, it is their efforts that brought us to the level of knowledge we have today. Here are some selections from these historic searches for knowledge.

We begin with a look at some very small things. The title is Micrographia Curiosa sive Rerum minutissimarum Observations... (observations of the smallest things). The author was the Italian Jesuit Filippo Buonanni (or Bonanni). This is the 1703 first separate edition of a book originally published as the second part of an earlier book from 1691. Buonanni designed microscopes, then a fairly recent invention, and this is the earliest Italian book on the subject. Buonanni describes microscopes and specifically his own, but the most interesting part is the numerous plates drawing what he saw under his microscope. Among the drawings are some creepy ones, insects such as the louse, mosquito, mite, flea and fly, not things you want to imagine as being many times their actual size. Item 24. Priced at $6,500.

Now we go from a man who used science to view very small things to someone who used it to see very large, but very distant objects. Galileo invented telescopes which enabled him to see distant objects never before observed or only observed previously as dots of light in the sky. However, this book is not about his telescope nor even the science with which he was most familiar. It is about comets, a subject Galileo admitted he knew very little. The book, published in 1619, is a rebuttal to theories of comets produced by the Jesuit Orazio Grassi. Galileo's beef with Grassi, and it was one that reached a personal level at times, was the latter's failure to provide sufficient observational evidence for his claims. It wasn't so much a concern for the correctness of Grassi's theories as the sloppiness of the science he used to reach them. The title is Discorso delle Comete di Mario Guiducci, a discourse by Galileo's pupil, Mario Guiducci, but the original manuscript showed that it was mostly written by Galileo. He was attributing the work to his friend to avoid getting into further controversies personally (however, everyone involved saw through his ruse). It can also be noted that Grassi thought his theory disproved Copernicus theory of a heliocentric universe, which Galileo supported but could no longer defend because of issues with church authority, so he attacked Grassi in general rather than on specific points. The two continued their arguments for several years in public papers before Galileo discontinued the debate, believing he had prevailed. Item 36. $40,000.

Speaking of the heliocentric universe model, so controversial in Galileo's time he couldn't speak of it, a Greek astronomer had reached a similar conclusion to Copernicus 18 centuries earlier. His name was Aristarchus of Samos and he put forth the theory that the sun was at the center of the universe and that the earth revolved around it, contrary to the popular opinion of its day and for another 20 centuries. He believed the revolution around the sun accounted for the years and the spinning of the earth on its axis for the days. Since the stars seemed to remain fixed despite the earth's orbit, he concluded they must be extremely distant, believing they were distant suns. Not bad for 200-300 B.C. Item 9 is De Magnitudinibus, et Distantiis Solis, Luna, Liber cum Pappi Alexandrini explicationibus quibusdam, published in 1572. It is a description of Aristarchus' theories as his original text is lost. $37,500.

Here is one of those books that didn't entirely get it right but was a step toward today's understandings. The title is Traité Physique et Historique de l'Aurore Boréale... by Jean Jacques d'Ortous de Mairan, published in 1764. The Aurora Borealis was a little understood phenomenon at the time. Mairan exhaustively searched for historic mentions of it which he recounts. Then, he posits his own theory. Mairan believed the sun's atmosphere reached out to that of the earth and they commingled, the result being the aurora. That is not quite what happens as it is electrons from the sun exciting the earth's atmosphere that creates the spectacular lights. However, what is notable is that Mairan recognized that the sun was creating the aurora which others did not see. He reached his conclusion based on the presence of more sunspots during times of high activity. Item 60. $3,000.

Here is one of those discoveries that plays an important role in everyday life even today though it is doubtful any of us ever think about it. The title is L'Art de Conserver, penadant plusiers Années, toutes les Substances animales et végétales, by Nicolas Appert, published in 1810. That roughly translates to the art of preserving over many years animal and plant substances. What Appert was preserving was foods. He would place a sample in a clean bottle, seal it tight, and put it in boiling water. He then found that the food would still be good several years later. What he did not understand was that he was killing the germs in the container, and by keeping it tightly sealed, not allowing any others to enter. The food could be preserved indefinitely. The canning industry and pasteurization of milk today are based on the process Appert discovered more than two centuries earlier. Item 8. $2,750.