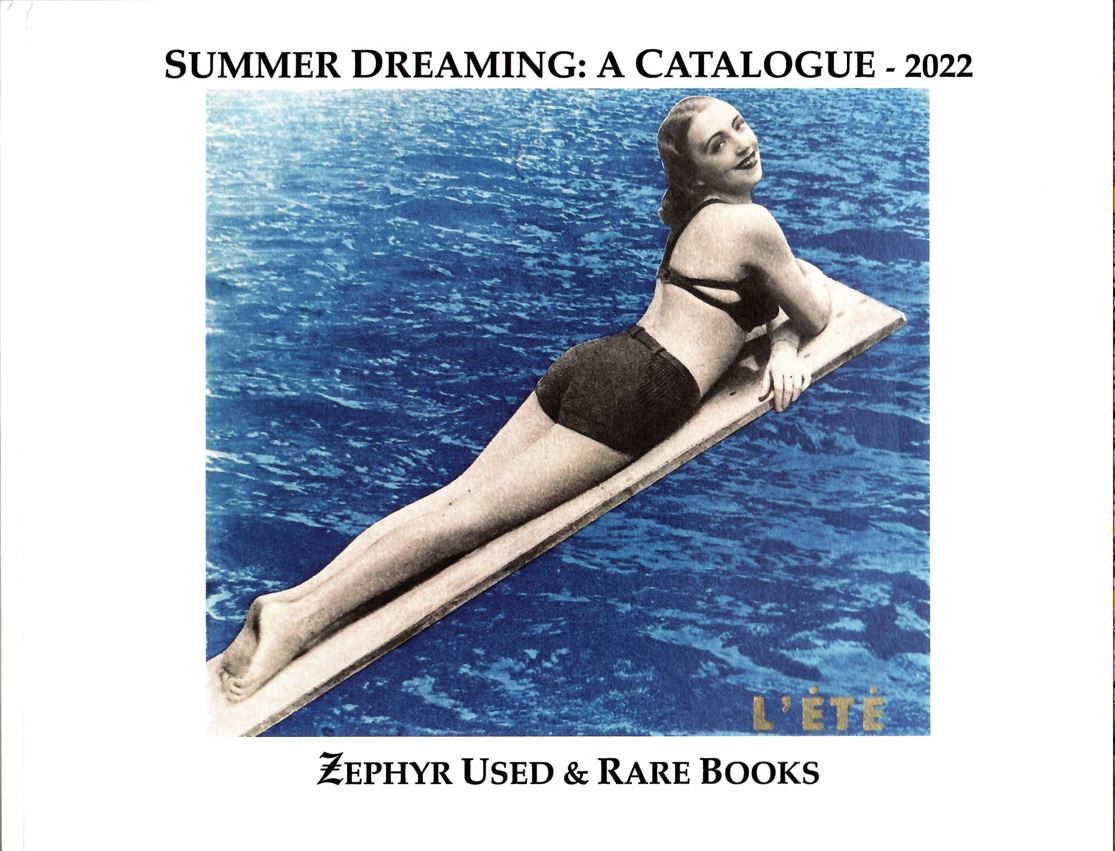 Zephyr Used & Rare Books has issued their Summer Dreaming: A Catalogue. It has something of a summer theme. Lots of travel items, including maps to show you the way from when roads weren't fit to travel. But, Santa riding in his sleigh isn't exactly a summer travel item. The connections are loose, but the material is fun, fascinating, and unexpected. You'll want to take a look. These are a few selections.

It's time to turn on the lights! The year was 1901 and the lights shown brightly at the Pan-American Exposition in Buffalo, New York. This is a brochure created by General Electric's Lighting Engineer Thomas Stieringer with photographs by Charles Dudley Arnold. The title is The Edison Lamp at the Pan-American Exposition. Having lost the bid to electrify the Chicago World's Fair in 1893 to Westinghouse, G. E. was determined to put on a show. After all, this was light bulb inventor Thomas Edison's company. The fair was strung with around two million 100-watt light bulbs, including on the prominent Electric Tower. Zephyr writes it produced “an incredible display when turned on each night attracting many people who visited.” Some of the big cities had electricity by then, but that was still a small minority of the American public. Those visitors must have been amazed. For the rest of the story, General Electric still survives but is a struggling company today. In 2020, they stopped making light bulbs after 130 years. As for the Buffalo fair, it sadly is remembered for the terrible event that happened there rather than the greatness of the show. It was there that President William McKinley was assassinated. Item 92. Priced at $225.

The lights were turned on throughout New York by 1934, but that did not make life bright for all the people. It was the Depression, and while life was good for some, it was a struggle to survive for others. Item 81 is Metropolis. An American City in Photographs, Agnes Rogers and Frederick Lewis Allen with photographs by Edward M. Weyer. It contains 216 photographs of everyday life in New York, commuters, subway crowds, beggars, tugboats, crap games, snow-shoveling crowds, tenement life, and more. Zephyr notes, it “has been described as a romantic masterpiece of moody black-and-white coverage of day-to-day life in New York at the height of the Great Depression.” They add, “Of interest is the focus of the book on where people ate lunch, including views of beautifully appointed luncheons in fine hotels, to daily luncheon specials consisting of tomato juice and corned beef hash with coffee.” $125.

There are many maps in this collection but here is the earliest, from 1896. Were there enough cars to justify a road map in 1896? No. But for the two decades before cars became prevalent, there was another form of post-horse transportation that took root (and route). Item 35 is Noll's New Road, Driving and Bicycle Map of Philadelphia and Surrounding Country from the latest official surveys and records. The American Wheelmen was formed in 1880 as bicycles were just entering their era of popularity, which in turn spawned the Good Roads Movement. The latter is usually associated with the movement to create good, coast-to-coast highways in the teens of the 20th century as automobiles became the preferred method of transportation, but it started as a coalition of bicycle enthusiasts and farmers who had to have their horses pull wagons through thick mud. That led to detailed maps such as Noll's guide for bicyclists on their journeys. This large folding map covered Philadelphia and Trenton and areas beyond, marking railroads, canals, churches, hotels, schools, post offices and more. $450.

Automobiles were still only in their second decade of significant public use when this comprehensive encyclopedia on the subject was published. The title is Cyclopedia of Automobile Engineering: A general reference work on the construction, operation, and care of gasoline, electric, and steam automobiles, commercial vehicles, motorcycles, light cars, and, motor boats... It was published by the American Technical Society in 1915, five volumes. It includes over 1,500 illustrations and photos, along with tables and charts. Among those consulting on the project was Charles Duryea, who built the first American gasoline-powered car in 1893. Half of the third volume is devoted to electric-powered cars, out of favor for a century but recently returned to popularity and many believe are the future. This book may not help you fix your new, computer-laden car, but if you have one of those early ones that looked literally like a horseless carriage, this should be of great help. Item 2l. $650.

Not far behind the automobile came an even more spectacular method of transportation, and it wouldn't need anything equivalent to the Good Roads Movement to facilitate travel. There are no potholes in the sky. Item 23 is Souvenir Catalogue Aeronautical Exposition. Madison Square Garden and 69th Regiment Armory New York City March 1st - 15th 1919. It had been just 16 years since the Wright Brothers first flight and here we were with a major show headlined by all sorts of companies in the field. Of course, the skies became a major theater in the recently ended Great War, and soon passengers would be flocking to the skies. Among those exhibiting at the show were Dayton-Wright, Rolls-Royce, Standard Aircraft Corp., Wright-Martin Aircraft Corp., L-W-F Engineering, and Packard Motor Car Co. Speaking at the exposition was an Assistant Secretary of the Navy by the name of Franklin D. Roosevelt. He said that America's security and success was dependent on gaining supremacy in military and commercial air travel. Roosevelt would realize the validity of that prediction a couple of decades later when he had to lead America though the second Great War. $295.

Here is a pair of primers meant for Hawaiian children just learning to read. Their titles are Outdoors in Hawaii: Run and Play and On the Beach. They were written by Helen Gay Platt and published in 1948. They follow the adventures of Lehua and Joe, cat Popoki and dog Skippy. They contain such inspiring dialogue as “Look, Joe, look Lehua! Run, Joe and Lehua! Run to Mother!” Oh no! Dick and Jane for Hawaiian children with a few too many exclamation points! These are first edition, first printings of the two volumes. Item 56. $200.

Zephyr Used & Rare Books may be reached at 360-695-7767 or zephyrbook@gmail.com. Their website is found at www.zephyrusedandrarebooks.com