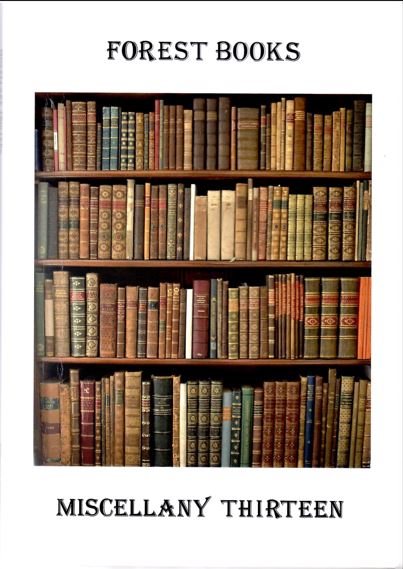 A miscellany from Forest Books.

Forest Books has issued their Miscellany 13, A Catalogue of Rare and Curious Books, Pamphlets & Printed Ephemera on a Wide Variety of Subjects. What are those subjects? They help us with a listing of some of those subjects, including agriculture, architecture, botany, children's books, crime & law, cookery, economics, education, English literature, the fine arts, horticulture, Ireland, military & naval, natural history, photography, private printing, social studies, science & medicine, sporting books, technology, travel & topography, etc. That's a lot of ground to cover. Let's take a look inside.

What bible were English Protestants reading before the King James edition? Here it is. The official title is The Bible, That is the Holy Scriptures Conteined in the Old and New Testament, Translated According to the Ebrew and Greeke... However, it is generally known as the Geneva Bible, as it was printed in Geneva, or the Breeches Bible for an odd translation of a word (and a few others). During the reign of Queen “Bloody” Mary, who sought to restore Catholicism to England in an unpleasant manner, some Protestants fled to Geneva where they printed a bible consistent with their beliefs. They first did so in 1560. As stated by the title, with different spellings, they translated it from the original Hebrew and Greek. This bible was used by Cromwell and many others, including Shakespeare who quoted from it in his plays. This edition says it was published in London (Forest thinks it might have been Amsterdam) in 1599. Item 14. Priced at £1,695 (British pounds, or approximately $2,038 in U.S. dollars.

Here's a song you don't know: Washing Day, a proper new Ballad for Wet Weather. No author is given, understandably, but it was printed by W. Hawkes Smith of Birmingham, who also provided the illustrations, in 1822. In contains “humorous” words and musical notation, meant for voice and piano. Sing along.

“My Kate, she is a bonny wife,

There's none so free from evil;

Unless upon a Washing day

And then she is the devil!”

Kate becomes a terror around washing day, particularly when it rains. Perhaps having to hang laundry to dry in the rain might explain her behavior. Any chance her critical husband ever volunteered to help? No. Of course not. Item 120. £95. (US $114).

Charles Darwin wasn't the first person to devise a theory of evolution. He wasn't even the first Darwin. His grandfather, Erasmus, was way ahead of him. What distinguished Charles from his grandfather and everyone else was he figured out what made it tick – natural selection. Erasmus Darwin advanced his scientific beliefs poetically, quite literally. Item 43 is his The Botanic Garden; a Poem, in Two Parts, Part I containing the Economy of Vegetation. Part II. The Loves of the Plants. With Philosophical Notes, published in 1791. While later overshadowed by his grandson (who was born after Erasmus died) and largely forgotten, Erasmus was very popular in his day. He both taught and entertained, a great way to teach. So he provides scientific learning and theories about plants in his poem while providing amusement. The second part, in particular, makes plants almost human, complete with their love life. This book is also notable as Part I contains five engravings by William Blake. £1,200 (US $1,426).

How do I not know about this event? I have always been suspicious of the belief in ghosts and such, what Cotton Mather referred to as the “wonders of the invisible world.” Where is the eyewitness proof of their existence? The answer is here. The heading is Wonderful Apparition which is supposed to be the Ghost of Cashman, published circa 1814. This is a large broadside printed by James Catnach on a small wooden press he had recently inherited from his father. We discover that a huge coach, its top like a pyramid, was running at an amazing speed that terrified spectators when “it suddenly vanished with an explosion as loud as the report of a thirty-six pounder.” It next appeared before a night watchman at 2:00 a.m. when it sprung up to a great height “and fell bang upon the watchman's Knowledge Box.” The sound drew the surrounding neighborhood to see what was happening, only to find the watchman “half dead with fear.” There's more. “By this time the phantom had assumed the form of a parrot.” And more - “One time it came running down the street like a large pig...” It concludes, “We cannot enumerate the half of the forms which this phantom is said to assume...” Catnach would go on to be a successful printer, but at this time he was operating only the small press while supporting his mother and sisters. It was a struggle to survive. He needed material he could sell. According to Wikipedia, the customers “who frequented his place of business were, in the main, vagrants, miscreants, and the underclasses of society.” However, this should in no way imply any suspicion of the accuracy of the Catnach's story. Item 57. £275 (US $327).

Here is a book that is of great relevance to America today (sadly), though it was published in 1760. The title is The Method of Treating Gun-Shot Wounds. First published in 1744 (this is a second edition), it describes cases that author John Ranby handled during the War of Austrian Secession. Ranby was a surgeon and was noted for advocating to Parliament the separation of the trades of surgeons and barbers. Though they are good with scissors and razors, most of us would still prefer not having surgery performed by a barber. Ranby advocated the use of Peruvian Bark, which contains quinine, for healing wounds. You might prefer something more recent as a guide to treating gunshot wounds today, but Ranby was operating in a time that was still two centuries before the use of antibiotics. Item 147. £375 (US $445).