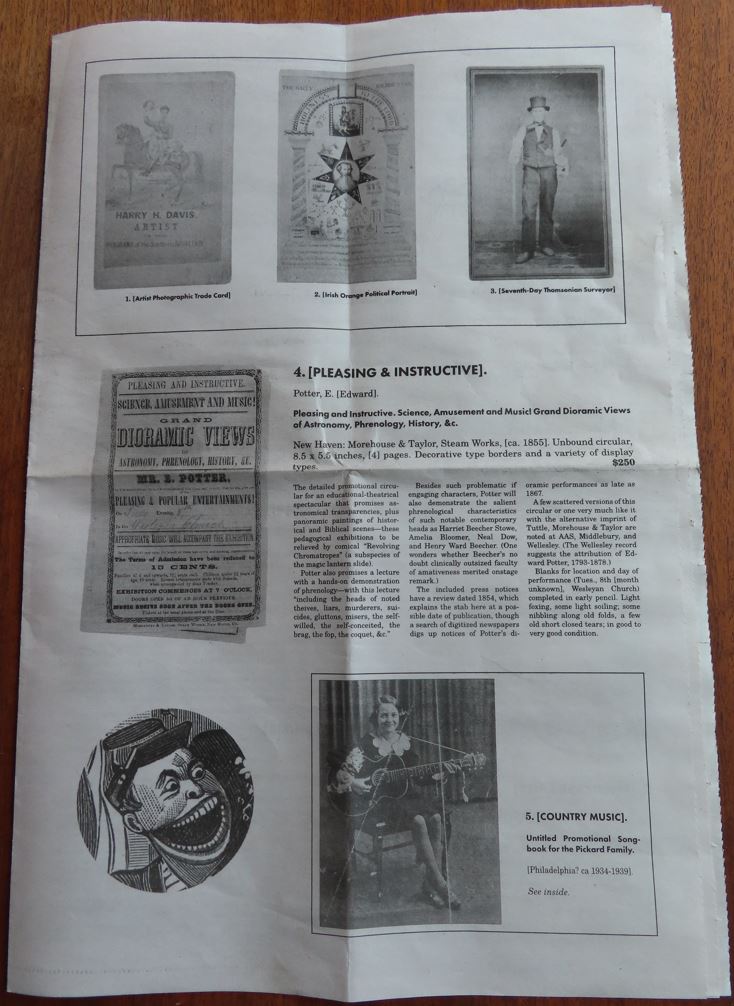 An odd front cover for a collection of oddities.

Garrett Scott, Bookseller, has issued his latest collection of oddities, Catalog 43 Made the Machine Crack. It refers to part of Harrison Paul's “humorous” speech described below. Not only are the items odd, that has to be one of the odder cover pages I've seen, looking remarkably like an inside page. These are some selections from this new catalogue.

Would you like a carte de visite portrait of the Ballykilbeg Star, Irish politician William Johnston? One thing you can be sure about Mr. Johnston – come St. Patrick's day, this Irishman was not wearing the green. He was the type of person who explains why the terrible conflicts lasted so long in Ireland. He was also known the "the Orangeman,” a member of the Orange Order, and probably would have been wearing orange in this photograph if they had color photography back in 1875. His political career was boosted by his being briefly jailed for violating the Party Processions Act, which prohibited provocative marches in an attempt to keep the peace between Protestants and Catholics. They were known as orangemen in honor of Protestant William of Orange's defeat of English Catholic King James II. Johnston would go on to serve as an English MP from Belfast for many years, until his death in 1902. Johnston is depicted amongst a panoply of mystic Protestant and Orange symbols. A banner above him reads “Holiness to the Lord.” Both sides were certain God was on their side. He probably was sick of them all. Item 2. $150.

They are not as famous today as the as the Carter Family, but country music also had the Pickard family in its early days of popularity, and they were enormously successful then. They were headed by Obed “Dad” Pickard, joined by his wife, Leila, and then their children, two girls and two boys. The got a boost when they first appeared on the Grand Ole Opry in 1926, just a few months after its founding, before it even had that name (it was still the WSM Barn Dance). That carried them to performing in some of the big cities such as Chicago and Detroit. They returned to the Opry in the early 1930s as stars, and soon had a show on NBC radio. Item 5 is an untitled promotional songbook for the Pickard Family, circa 1934-1939. The front wrapper has a picture of a young girl with a guitar, written in ink it says “little Anne.” That would be Anne Pickard, the youngest in the family. Someone has penned in the lyrics to “Cowboy Jack” (presumably the Carter Family song) on the final blank page. According to All Music, “Their repertoire was as wholesome as they come, blending ballads with cowpoke songs...” You can find their music on YouTube and even a brief excerpt from a TV appearance. That was in Los Angeles which is where they moved from Tennessee. “Dad” died in 1954 and he was the glue to the family. They continued a few more years but soon disappeared. $150.

What is Down East Yankee humor? Do these people even have a sense of humor? Not much of one, based on this autograph manuscript by (maybe) Harrison Paul. It is a manuscript speech by Mr. Paul for the anniversary of the Wesleyan S. School on January 1, 1949, entitled The Yanky. It was evidently given in Ohio, based on the content. Scott describes it as “a supposedly Down-Easter's humorous address.” And supposedly humorous. Paul wrote, “I am a Yank'y. I come from down East, by Wells & Co, express, on O'Riley Telegraph Poles, no the wire strung alonge you know. I took it in to my head to come out and see the Buckeys, folks said they grow'd out here.” And, “I tell you we must wake up & go to California and take care of that gold. If we could form a copartnership with Each other, and go of[f] separate twould suit me, I would [not] want any Lawyers or Rascals, Doctors or Thiefts, for you know Lawyers would cheat us out of the gold. you know how, I will tell you, they would get us all fighting, then they would take it while we were fighting it out. Doctors you know take the short way, kill us off and take the proceeds.” Not exactly side-splitting humor. Item 8. $550.

E.C. (Edward Cornelius) Delavan lived in Albany, New York, when he took his first job, as an apprentice in a printing shop. He next worked in his brother's hardware business, spent some time in England as buyer for his brother, but in 1820 returned to New York City where he became a wholesale wine merchant. It was quite lucrative and he used some of that money to speculate in land along the Erie Canal. He became fabulously wealthy, building one of the finest hotels, the Delavan House, in Albany. It burned to the ground, but that was 20 years after Delavan died. Now wealthy, Delavan did something unusual for a man who made his fortune as a wine merchant. He became deeply involved in the temperance movement, founding the New York State Temperance Society. According to an apocryphal story, he dumped the contents of his wine cellar in the street. Item 19 is a letter Delavan wrote to “Dear Professor” in 1841. It is devoted to one of his temperance projects that might sound trivial. It was to convince churches to stop using fermented wine for communion. He writes, “They say 'no reformed dunkard must touch alcohol any where.' Who will go with you to the ministry of New York? - 800 churches in this state alone – now are the unfermented! I wish you would give me your view in favor of the unfermented as the right substance.” Scott speculates the recipient of the letter may have been his ally, Eliphalet Nott, President of not far-off Union College, but notes there is no specific evidence of this. $100.