Private Presses, Typography, Artists' Books, Fine Bindings and More from The Veatches Arts of the Book 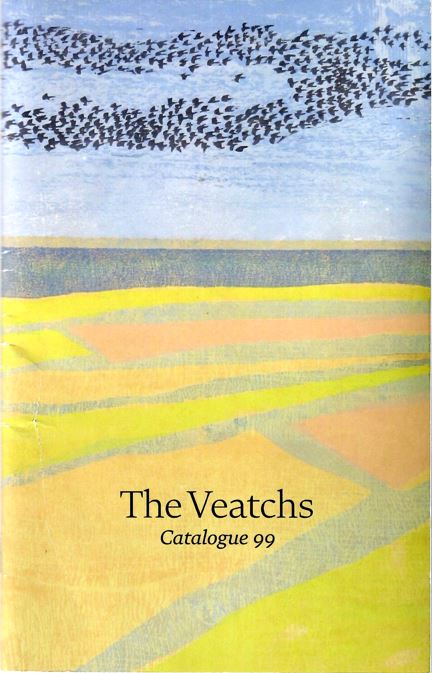 The Veatchs Arts of the Book is offering their Catalogue 99 – A Bouquet of Private Presses, Typography, Artists' Books & Fine Bindings, with 19th century stock blocks & an illustrated manuscript by Susanne Moore & Alan Robinson. The Veatchs are a prime source of all things related to the book arts. These are a few selections from this latest catalogue.

We will begin with that unique manuscript from Suzanne Moore and Alan Robinson. The title is Kaa's Hunting, a chapter from the Jungle Books, but Rudyard Kipling never saw a copy like this. It was calligraphed by Moore using various colors and gold while Robinson added the watercolors. Suzanne Moore is a noted artist with a focus on lettering and calligraphy, who is a creator of limited edition books and unique manuscripts. Alan Robinson is a veteran of the book field, being both an artist and a printer. He ran the fine printer Cheloniidae Press later the Sea Turtle Press. Moore and Robinson combined on earlier projects but the Veatchs say “this is by far the most extensive and original collaboration between the renowned calligrapher and artist.” It is a one-of-a-kind, commissioned by a patron whose name is listed in the book. Moore uses size and colors of her lettering to emphasize key events and emotions. This story features many animals (it is a jungle book) and Robinson is particularly known for his portrayal of animals, their having appeared in others of his works. Item 43. Priced at $22,000.

Next we have what the Veatchs describe as “rare survivals.” They are engraved wood blocks used as illustrations in 19th century issues of Harper's Magazine. They explain, “When photomechanical processes replaced wood engravings by the 1890s, most wooden blocks were discarded or used for fuel.” Some of the blocks available are:

A profile portrait of Harriet Beecher Stowe created for the October 1885 issue of Harper's. It was an article about Hartford where Stowe and Mark Twain lived. There was an interview with Stowe. A copy of that issue (in need of rebinding) is provided with the wood block. $900.

A group of mice playing in the kitchen while the supposed guard cat cluelessly sleeps. $150.

Two woodblocks displaying “Morgans Indiana and Ohio Raid” during the Civil War. They took place in 1863. $300.

A banner displaying the words “Auction Sale,” which you may want to use of you're conducting auctions. $150.

Historic Sackets Harbor & Horse Island Light House. This was the scene of two battles during the War of 1812. They are in the New York portion of Lake Ontario. $300.

This item is a hand-colored Book of Hours, with some quite skilled coloring. The title is Livre d'heures ou Offices de l'Eglise Illustres d'apres les manuscrits de la Bibliotheque du Roi. Some quick translating says this was illustrated from a manuscript book of hours or offices of the church in the French King's library. This book was originally created in 1843 but this copy was issued in 1890. It is the work of Mlle. A. Guibert. A popular gift book, it was printed only in black and white but was appropriate to be used for hand-coloring (but not by children). The coloring on this copy is, in the Veatchs words, “a labor of love!” An inscription reads, “a ma chere petite fille Annie, souvenir de sa grand-mere Lefebre,” which translates to “my dear little girl Annie, a souvenir from her grandmother Lefebre.” Item 7. $1,100.

This is a bibliography of printing, at least as of 1877. It is by the developer of one of the most successful press manufacturers. His name was Richard M. Hoe, and while being one of the inheritors of his father's business, he was responsible for much of the company's great success. The book is The Literature of Printing. A Catalogue of the Library illustrative of the History and Art of Typography, Chalcography, and Lithography. If you are as ignorant as I, “chalcography” refers to the making of engravings on copper plates. This was “the first American bibliography on the history of printing and typography.” It contains 1,500 titles arranged alphabetically by author with indexes of printers and locations. Apparently, the list was compiled by bookseller Edward C. Bigmore, but Hoe was undoubtedly occupied running a very large business. He was succeeded by his nephew, Robert Hoe III, who is remembered as one of the greatest American book collectors ever. Item 29. $650.

Next is Men of Printing, Anglo-American Profiles. Neither Richard nor Robert Hoe make the cut, but that's because this list is focused on private, fine press printers. If you collect in this genre, you will appreciate this work. It contains wood engraved portraits of eight of the best-known fine pressmen, William Morris, Frederick Goudy, T. J. Cobden-Sanderson, John Nash, Emery Walker, Eric Gill, St. John Hornby, and Bruce Rogers. The creator is no slouch in the field himself. Barry Moser is an artist and illustrator, and operates a private press, the Pennyroyal Press, which printed this work. It was published in 1976, one of 25 copies on Baskingwerk paper. Item 48. $725.