The Orient and Africa from Antiquariat Kainbacher 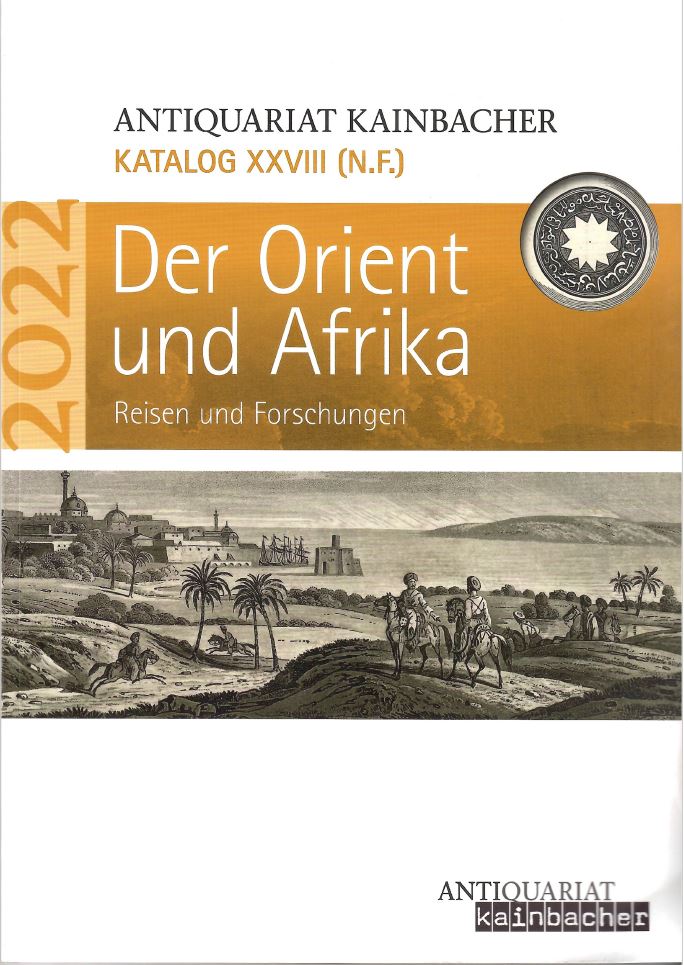 The Orient and Africa.

Antiquariat Kainbacher's latest catalogue, XXVIII (28), is titled Der Orient und Afrika. While reading the catalogue will require some knowledge of German, it is unlikely that anyone will need to have the title translated. It's meaning is obvious. Most of these books arise from travels, and the authors who were writing about Africa and Asia were generally writing from a European point of view. That is worth remembering as visitors to Europe and America from Africa and Asia in earlier times might not have it quite right from the westerner's point of view. We all bring our preconceived notions. Here are a few samples from this catalogue.

We begin with a classic collection of early voyages. Theodore de Bry put together a compendium of 16th century voyages which was published in Latin and then German. The German edition is uncommon. These are what is known as the little or minor voyages, which travelled to Southeast Asia, the Middle East and Africa. The title is Orientalische Indien, Das ist: Außführliche und vollkommene Historische Geographische Beschreibung aller und jeder Schifffarten und Reysen. That translates to “Oriental India That Is: Full and Complete Historical Geographical Description of Any and All Shipping and Travel.” This contains an abridged version of the previously published first eleven parts. It then adds the later 12th and 13th parts as an appendix (but without the title pages). These were the only German editions of the those last two parts. Priced at €25,000 (euros or approximately $26,490 in U.S. dollars).

Next is Reisen zur Entdeckung der Quellen des Nils in den Jahren 1768. 1769. 1770. 1771. 1772. 1773., in English “Travels to discover the sources of the Nile in 1768. 1769. 1770. 1771. 1772. 1773.” This is a first German edition of a book translated from English. The writer was English explorer James Bruce, who set out in 1768 to answer the old question of where the Nile began. It was not as easy as simply traveling up the river. For starters, he needed permission to travel, so to get that, he pretended to be a physician. However, he could only travel as far as Aswan as hostile tribes made it impossible to proceed further. The result was he had to go east to the Arabian peninsula, and later head back to Africa, arriving at the Fountains of the Nile springs. Voila! Bruce had discovered the source of the Nile. Or had he? He thought he had, but was nervous about the reception to his claim. As a result, he did not publish this book until 1790. It turns out Bruce was wrong, or at least most people so consider it. Bruce had found the source of the Blue Nile, but most people consider the White Nile as the primary river. Its source was not found until 1861 by another British explorer, John Hanning Speke. €4,500 (US $4,753).

This is an account of three expeditions to Asia Minor (now western Turkey) and Syria by German archaeologist and geographer Karl Humann. The title is Reisen in Kleinasien und Nordsyrien. Ausgeführt im Auftrage der Kgl. Preussischen Akademie der Wissenschaften (Travels in Asia Minor and Northern Syria. Executed on behalf of the Royal Prussian Academy of Sciences). It was written by Humann and Otto Puchstein who accompanied him on some of his excavations. Humann was searching for ruins of ancient cities. His greatest discoveries came in Pergamon, an ancient Greek city in present-day Turkey. Of particular note was his unearthing of the Great Alter of Pergamon. He obtained permission from the Ottoman government to remove the alter, friezes, and other artifacts to Berlin, where the Pergamon Museum was built to house the discoveries. Offered are the text volume with its illustrations and maps and the atlas volume. €16,000 (US $16,901).

Next we have a cache from excavations at an ancient site, but rather than a cache of artifacts it is one of photographs. They were taken by Georges Legrain, a French Egyptologist, who after studying ancient Egypt in Paris was sent to participate in excavations in that country. He was stationed at the Temple of Karnak in Luxor. He was in charge of rebuilding the collapsed columns. In 1895, he was made overseer of the antiquities and initiated further restoration of the temple. In 1903 he made one of the greatest discoveries from ancient Egypt. Buried within the temple was a cache of around 800 stone statues and 17,000 bronzes. It is the largest collection of statues ever found. It is known as the Karnak Cachette. It is believed they were buried there by later priests after centuries of private offerings left at the temple took up too much space. What is offered are three contemporary albums of Legrain's photographs, 120 mounted ones in all. Two are signed by Legrain. €16,000 (US $16,901).

This book is about a man whose name you may not recognize, but he was a powerful figure in the second half of the 19th century. His name was Hamed bin Muhammed el Murjebi but not many Europeans would have known him by that name. He was better known as Tippu Tip, which translates to “gatherer of wealth.” He also gained political power in Central and eastern Africa, though wealth was his main goal. He made his money in ivory and the slave trade. He also owned many slaves for his personal exploitation. He knew the noted African explorers of his time, including David Livingtone and Henry Stanley. He was present when those two had their legendary meeting. He later accompanied Stanley on his unsuccessful mission to relieve Emin Pasha. This book is Tippu Tip. Lebensbild eines zentralafrikansichen Despoten. Nach seinen eigenen Angaben dargestellt, which translates to “Tippu Tip. Portrait of a Central African despot. Presented according to his own information.” It was written by Heinrich Brode. Brode knew Tippu Tip from earlier days in his native Zanzibar. Brode conducted the interviews and wrote Tippu Tip's story, which he translated to German. €2,900 (US $3,063).