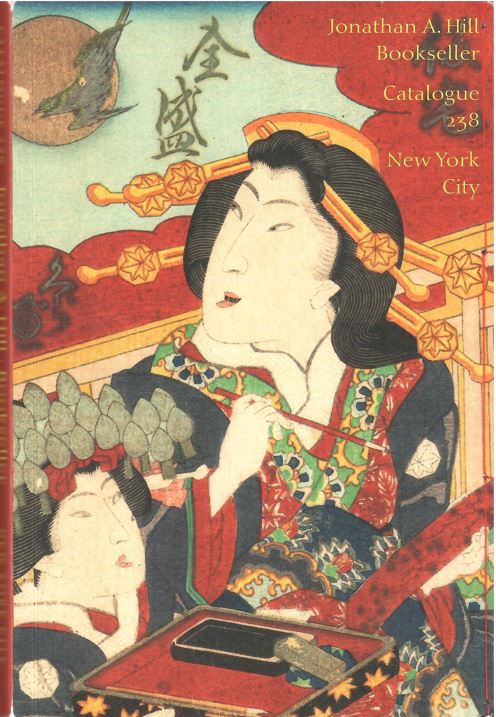 Jonathan A. Hill Bookseller has issued their Catalogue 238, Japanese, Chinese, & Korean Books, Manuscripts, & Scrolls. There's not much description that needs to be added to that. We can say that most of the works are quite old, generally 19th century and earlier. There are a couple of Japanese printed scrolls that date back to the early 13th century. If your reaction is, “Wait a minute, that's before Gutenberg,” they were printed with wood blocks, not movable type. There are also numerous items from 19th century Japan, the time when the country was opening, or forced to open, to the West. Here are a few items from this collection.

The most notable visits to Japan when it was closed to the outside world were the two by American Commodore Perry in the 1850s. They forced the nation to accept trade with the outside world, but there were earlier ones, though often unintentional. Whaling brought outsiders to nearby waters earlier in the century, and occasionally they stopped for help, something which made the Japanese nervous. Item 7 is a collection of drawings and internal documents pertaining to two such visits in the 1820s. First was the landing of the Saracen, an English vessel, in 1822. The men needed supplies and assistance and the Japanese obliged. However, they would not allow the men to disembark. The archive includes a drawing of the Saracen and information on the ship's crew of 34. It was a peaceful encounter. The second encounter did not go so well. Another English whaler landed on a Japanese island in 1824. The English attempted to trade for some cattle but when that proved unsuccessful, they attacked. It resulted in the death of the leader of the English party and some of the cattle. There is a drawing of the Englishman, who is holding a gun. It resulted in a more hostile attitude toward foreign vessels going forward, the previous orders having been to provide assistance though not conducting trade. Priced at $7,500.

Next we'll turn the tables with the story of some Japanese sailors who were shipwrecked in the Philippines. The title translates to Shipwrecked Tokusaburo and His 14 Crew Members. It is a manuscript dated 19 April 1860. The ship Koshiomaru was traveling between Japanese ports when a storm hit which destroyed the vessel's rudder. The crew could not control its movement so it drifted far away, finally landing on a Philippine island. The indigenous tribe was not so isolationist as the Japanese, so they allowed the crew to land and provided assistance. This account tells of the sailors time in the Philippines, reporting their experiences, including a trip to Manila, and how they were cared for, including the diet of the local people. It also provides short biographies of the crewmen. They had no way home so they stayed in the Philippines for 10 months before a British ship brought them back. Item 30. $4,500.

There aren't a lot of books in this catalogue that English-only speakers can read. I think this is the only one – The Chinese Classics. With a Translation, Critical and Exegetical Notes, Prolegemena, and Copious Indexes, by James Legge. I'm not sure even English speakers will understand that title. It consists of five volumes in four. Originally published in Oxford in the late 19th century, these were reprinted by the London Missionary Society's Printing Office in Hong Kong in 1939. Legge translated many Chinese classics and these remain standard translations many years later. Item 43. $1,500.

This is a scroll, and a lengthy one, approximately 27 feet long. It is composed of 19 joined sheets. It was printed between 1222 – 1227, using a high-quality thick paper with bold thick strokes for the lettering using black ink. The scroll attaches to a wooden roller. The printing took place at a monastery in Nara, Japan. It is from Mahaprajnaparamitasutra, the Sutra of Perfect Wisdom. Prajnaparamita was a female deity, the Great Mother, who was a fount of wisdom. There were around 40 texts to the Mahaprajnaparamitasutra written in India from 100 BC – 600 AD. Copies were brought from India to China by Xuanzang, a Chinese Buddhist pilgrim, in 645. He and a team then took on the massive job of translating it all. Item 73. $15,000.

Here is an odd collection. I guess we can call this ephemera, but it is printed ephemera. The collection consists of around 1,650 chopstick wrappers. They are from Japan, circa 1920s-1930s, mounted in six albums. They were carefully assembled and placed in the albums by an anonymous collector. They range from elaborate to simple, and come from famous restaurants and resorts to many long forgotten. Hill notes, “the collector must have been a wealthy gourmet to have travelled widely and eaten well.” Item 6. $4,500.

This one consists of three volumes on a favorite subject – tape worms. It is by Kaien Kitamura published in 1849. The title is Kaishi (Treatise on Intestinal Parasites). It describes diseases caused by intestinal worms, the types of worms, and corrects some theories already outdated in 1849. It also describes various cures such as those using honey, minerals and plants, liquors, fruits, fish oil, and human urine. If all that doesn't kill them I don't know what will. Hill notes the book has “minor marginal worming.” Item 38. $5,500.