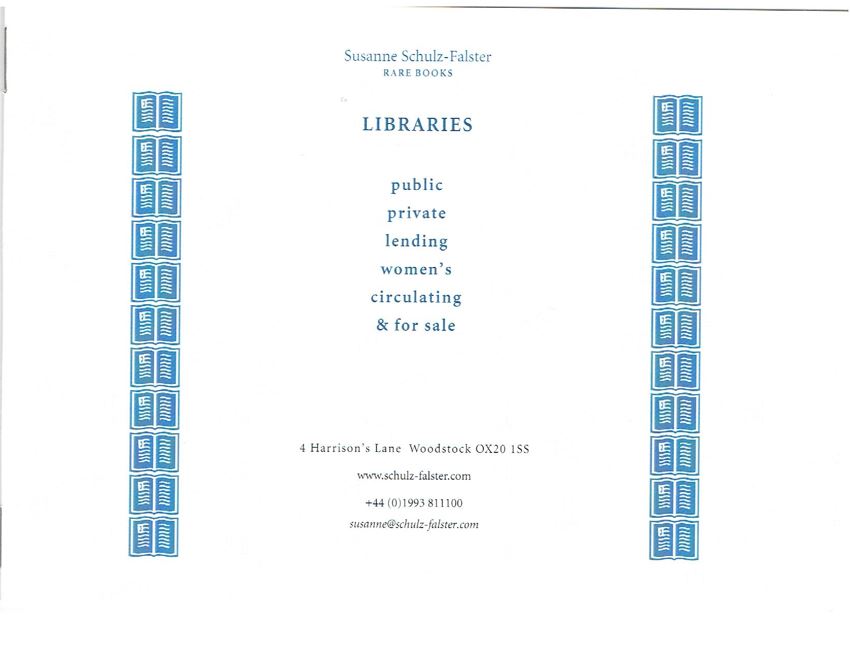 Susanne Schulz-Falster Rare Books has released a catalogue of Libraries – public, private, lending, women's, circulating & for sale. These are works related to libraries, including many catalogues of their collections, sales, and other topics related to libraries. These aren't collections you are likely to find in your local library unless it has an antiquarian and rare books room. These are 18th and 19th century libraries, from a time when there were few public libraries. Most were membership ones or those associated with a learning institution. They provide a fascinating look at what people read a long time ago, or in the case of science and medicine, what the existing beliefs were when knowledge was primitive by today's standards. These are a few of the items you will find in this catalogue.

We start with a library that existed in the 18th and 19th centuries. It was the first public library in Newcastle-on-Tyne at a time when public libraries were few and far between. The library was in St. Nicholas' Church. Rev. Robert Thomlinson donated his collection of 1,200 books and a library was built attached to St. Nicholas' cathedral. It was opened in 1741. The public was invited. They could read the books at a time where most libraries were open only to dues-paying members. A librarian was hired and a fund set aside to purchase new books. Unfortunately, over the years, things did not go so well. Successor librarians were either incompetent or derelict and the building suffered disrepair, little being added to the collection. In 1829, they finally published a catalogue, A Catalogue of the Public Library St. Nicholas' Church, Newcastle Upon Tyne; with a Copy of the Will of R. Thomlinson...to which is added a Catalogue of Books Contained in the Old Library. The second part included books obtained even earlier than Thomlinson's gift. A few years earlier, an attempt was made to clean up the library and this catalogue was intended to let the public know what they had and the regulations for using the services. Patrons were required to sign a form saying they would not “abuse” the books and various other things. Ultimately, it was too little too late and another public library had opened in Newcastle. A few years later, St. Nicholas' library was shut down and the books transferred, I believe to that other public library. Priced at £1,200 (British pounds or approximately $1,560 in U.S. dollars).

Robert Walpole is generally regarded as the first British Prime Minister. Some dispute the exact dates, but it was roughly 1721-1742. He was, and still is, the longest serving British Prime Minister. A member of the Whig party, he steered a moderate course. Nevertheless, he did elicit his share of controversy and had his vociferous opponents, but for years he was able to outmaneuver them. Having the King's favor didn't hurt. Walpole was a master politician. Eventually, time caught up to him and he resigned after a motion of no confidence. A century after his term as PM, his descendants decided to put together a bibliography of material about him. The title is Catalogue of Political Pamphlets Relating to Sir Robert Walpole's Administration. It is a manuscript account with a title page and notes by MP Frederick Walpole circa 1840 although most of the writing is in another hand. Arranged alphabetically by title, Schulz-Falster describes this as “a fascinating labour of love and a record of familial interest.” £2,800 (US $3,641).

This one pertains more to booksellers than libraries. The title is Dissertazione Accademica sul Commercio degli antichie moderni librai... (Academic Dissertation on Commerce of Ancient and Modern Booksellers). The author is Angelo Battatglini, the book published in 1787. Battaglini was a cleric and writer and a second custodian of the Vatican Library. Using his library research Battaglini wrote about the book trade in early and modern times. Evidently, even in ancient times authors were not always pleased with book dealers. In those days (pre-printing), book dealers were copyists as much as sellers. They would be hired to copy existing manuscripts. Battaglini says that in Roman times authors were complaining that scribes were incompetent and overcharged. Later, complaints turned more to poor printing and editing. £1,250 (US $1,629).

This is the first catalogue of a very old and important German scientific society. The title is Academiae Caesareae Leopoldino-Carolinae naturae curiosorum Bibliotheca physica, medica, miscella partim sociorum munificentia partim ipsius sumtibus comparata. This translates to “Leopold-Carolina's library of physical, medical, miscellaneous curiosities of natural history, partly through the generosity of his allies, and partly by his own sums.” The Leopoldina Academy was founded in 1652 to promote the sciences in Germany. It obtained its unusual name through gifts from the friends of and the Emperor, Leopold I, himself. In 1731, their library was founded in Nuremberg, and this catalogue prepared by Andreas Elias Buechner was published in 1755 to celebrate (a little late) the academy's 100th anniversary. Today it is known as the German National Academy of Sciences Leopoldina. This catalogue lists 1,270 entries, sorted by date of accession. There is also an author index at the end. Buechner was the sixth president of the Leopoldina and also wrote a history of the academy. £3,750 (US $4,900).

Here are some books not to read. Better not. Catalogue des écrits, gravures et dessins condamnés depuis 1814 jusqu'au 1er Janvier 1850. Suivi de la liste des individus condamnés pour délits de presse, attributed to Victor Gaillard, Commissaire de Police de la Librairie. That translates to “catalogue of condemned writings, engravings and drawings from 1814 to January 1, 1850. Follow-up to the list of individuals convicted for press offenses.” This is not the usual list of banned books put out by the Church but one generated by civil authorities. The first three parts cover banned political pamphlets and engravings from three time periods, 1814-1830, 1830-1848, and 1848-1850 (the date of publication). They correspond with three eras of leadership in France. The fourth part deals with items banned for immorality, obscenity, and issues of that sort. Finally, it lists 335 journalists, writers, publishers, printers and booksellers charged with these offenses. Punishments ranged from fines to imprisonment, with an occasional acquittal. £200 (US $261).