Books and Autographs from Michel Bouvier 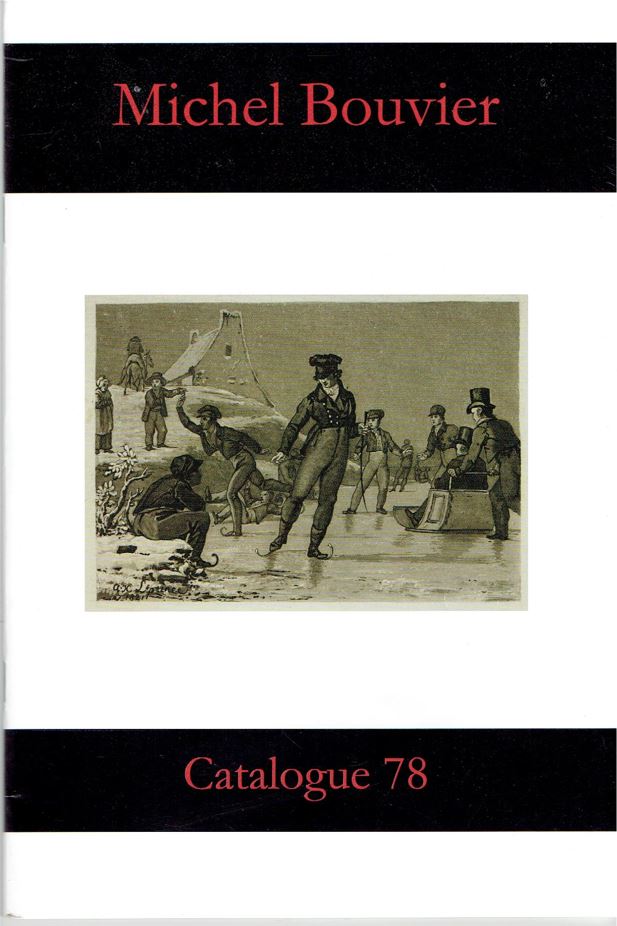 Michel Bouvier has issued Catalogue 78 Livres et Autographes (Books and Autographs). Bouvier is a French bookseller, located in Paris. You will want to brush up on your French if that is not your native language as the catalogue is written in the language. That is true of most of the books too. They are presented in chronological order with six centuries represented. Dates range from 1529-2002. The great majority can readily be classified as antiquarian. Subject matter varies so there will likely be something for just about everyone in this collection. These are a few examples.

We begin with Confusion de la Secte de Muhamed (confusion of the Mohammedan sect), by Juan Andres, published in 1574. It is a first French edition of a book originally published in Spanish in 1515. It is an attack on the Islamic religion intended to convert its followers living in Spain to Christianity. It later appeared in several other European languages, evidently with the intention of converting other Muslims on the continent. It continued to appear often through the 16th and 17th centuries. The timing of its publication is significant. Muslims had lived in Spain for centuries but had been pushed back to smaller territories. The last slice of the land still controlled by the Moors was captured by Ferdinand and Isabella in 1492. Andres was a Muslim scholar who converted to Christianity at this time, becoming a priest and its strong advocate. Even before this date, Ferdinand and Isabella had established the Spanish Inquisition. Great pressure was placed on Muslims and Jews to convert, with expulsion and death being potential consequences for those who did not comply. A book that encouraged voluntary compliance was a useful tool for the state. Item 2. Priced at 3,800 € (euros, or approximately $4,133 in U.S. dollars).

This is a letter from Margaretha Geertruida Zelle, a name you likely don't recognize. You will know her stage name, Mata Hari. She was born in the Netherlands but became known in France. She was an exotic dancer, or perhaps erotic dancer. She pretended to be Javanese, mysterious and enticing. On the side, she was a mistress and courtesan. As she grew older, she fell in love with a Russian pilot serving France who was shot down behind the lines. She received permission to visit him. She had connections having once danced for the German Crown Prince. The French let her go on the condition she spy for them. The Germans asked a similar favor on their behalf. Exactly who she was spying for if anyone is unclear. She had nothing of much use to give anyone but the French decided she was a traitor, arrested and convicted her. Mata Hari was executed by firing squad, though many believe she was scapegoated for the French not doing well in the war, her loose reputation making her a good target. Item 58 is an undated three-page letter (probably 1906) from Mata Hari to a Mr. Franck. It is written on letterhead of the Elysée Palace Hotel. She thanks him for the “loge” (probably a box seat or a dressing room) she gave him. She says that in February she will be dancing at the Monte Carlo Opera and will return in March. Then they can talk about ballet and she will have him sign some paper. She concludes by wishing him success with his theater. 3,500 € (US $3,806).

Who invented the automobile? You might say Gottlieb Daimler or Karl Benz, perhaps Ransom Olds or Henry Ford. It was none of the above. The first automobile of some sort was built over a century earlier by Frenchman Nicolas-Joseph Cugnot. Cugnot built a three-wheeled vehicle powered by a steam engine in 1770. It could carry a heavy load but did not go very fast, not much more than 2 mph. The driver was seated behind the boiler with a handle in front for steering. Cugnot ran a few trial runs but eventually the idea was abandoned. His forté was military engineering to which he returned. Item 31 is Théorie de la fortification, avec des observations sur les différens systêmes qui ont paru depuis l’invention de l’artillerie, et une nouvelle maniere de construire des places. That translates to “theory of fortification, with observations on the different systems which have appeared since the invention of artillery, and a new way of building places,” and was written by Cugnot, published in 1778. Had Cugnot stuck with automotive engineering you would know him better. 300 € (US $326).

Here are the games boys were playing 200 years ago. The title is Les jeux des jeunes garçons représentés par un grand nombre d’Estampes, Accompagnées de l’Explication des Règles, de Fables inédites et d’Anecdotes (the games of young boys represented by a large number of prints, accompanied by the explanation of the rules, unpublished fables and of anecdotes) published in 1822. The book publishes the rules of dozens of games and is accompanied by various fables. However, what is most notable is the prints, the work of artist Xavier Le Prince. Le Prince was a notable artist of his time. He was a prolific artist depicting all sorts of subjects, including scenes, portraits, and as here, games. He also published a similar volume of girls' games. There are games with hoops, tops, kites, rackets, jump ropes, and more. His more serious paintings can be found in many museums including the Louvre and Metropolitan Museum of Art. Despite his significant output, it is but a fraction of what it might have been as he died at age 27. Item 41. 1,800 € (US $1,940).

This is an old book, printed 400 years ago, written two millennia ago. The title is Histoire des Juifs, écrite par Flavius Joseph sous le titre d'Antiquités Judaïques, Traduite sur l’original Grec recu sur divers manuscrits par Monsr Arnauld d’Andilly (History of the Jews written by Flavius Joseph, under the title of Judaic Antiquities, Translated from the original Greek received from various manuscripts by Monsr Arnauld d'Andilly). This was the first modern translation of Josephus' work from the original Greek, first published in 1667. This edition is from 1700. Arnaud was a priest and a poet as well as a translator. The book was written during the first century. Josephus was a Jew who fought the Romans during the Jewish revolt in 66 but was captured. He saved his life by making a prophecy, that Roman commander Vespasion would become emperor. He was imprisoned instead of killed awaiting the outcome of his prophecy. When it turned out to be true, he was freed, given a house and pension, and made a Roman citizen. It was then that he wrote this history of the people of whom he was born. Item 12. 9,000 € (US $9,788).