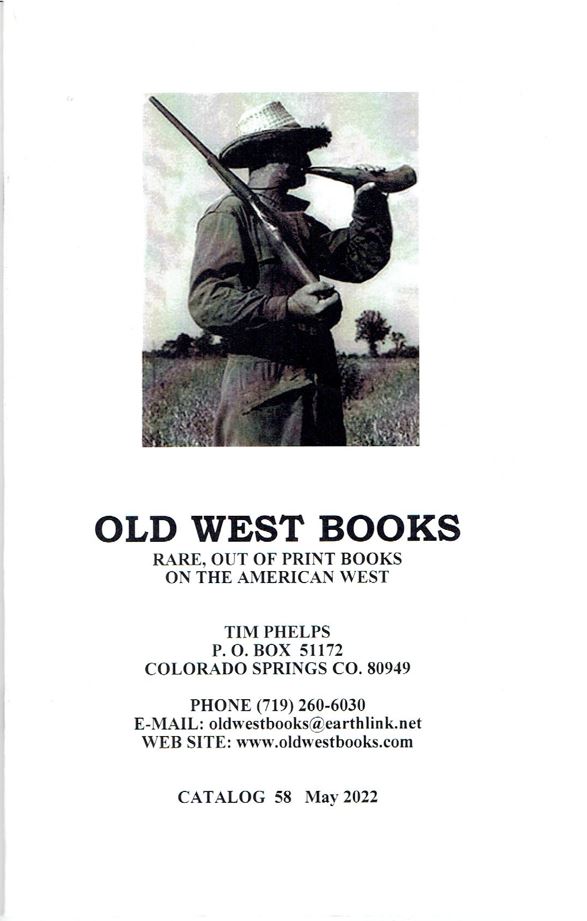 Old West Books has released their Catalog 58, May 2022 of Western Americana. This is a collection of old western material, much of it obscure, some well-known. Everyone of them is a valuable piece for a collection of the American West in the times of pioneers, settlers, gunslingers, and old time sheriffs. Here are a few samples from this collection.

Elizabeth Custer, wife of General George Armstrong Custer, wrote several books after her husband's premature passing. She followed him out west, living as an army wife while he fought Indians. She was devoted to him, a devotion that endured through the 56 years she lived after his death. Her books are very much odes to his life as she sought to rehabilitate her husband's reputation after his ignominious defeat at Little Big Horn. One of her books is Following the Guidon, published in 1899. It is an account of army life on the western frontier. She describes a buffalo hunt and the Indian scout Wild Bill Hickok. She also covers the Washita campaign 1868-1869, a fight with Indians that included the wiping out of a peaceful Indian village, with the killing of women and children. It is often referred to as the Washita Massacre for the one-sided killing that took place. It made George Custer a controversial figure long before Little Big Horn. This copy has been inscribed by Mrs. Custer “To Amy from Aunt Libbie Christmas 1900.” It contains a “Beckwith” bookplate and University of Kansas course grades for Abby Beckwith. It is not clear whether Amy and Abby are the same, or whether she was Mrs. Custer's niece. Item 15. Priced at $950.

This is an autobiography of a black cowboy in the Old West. His name was Nat Love, born a slave in Tennessee in 1854. A few years after emancipation, having shown a skill breaking horses, he headed west. He participated in cattle drives and rodeos, occasional gunfights and Indian skirmishes. Love recounts his experiences with numerous well-known western figures such as Billy the Kid, Buffalo Bill, Jesse James and Kit Carson. At one point he was captured by Indians, but later escaped. He tells his story in The Life and Adventures of Nat Love, Better Known in the Cattle Country As "Deadwood Dick". By Himself. A True History of Slavery Days, Life On The Great Cattle Ranges and On The Plains of The "Wild and Wooly" West, Based On Facts, and Personal Experiences of the Author, published in 1907. The “Deadwood Dick” moniker came from his outstanding performances at a Deadwood rodeo. Love may have had a habit of exaggeration on occasion. Ramon Adams, in Six Guns and Saddle Leather, says that although he “is supposed to have been writing of his own experiences, he had either a bad memory or a good imagination.” In 1890, Love retired from cowboying, became a Pullman porter and later a bank guard. Item 41. $1,250.

Here is another autobiography, that of Wild Bill Carlisle. Carlisle was born in Pennsylvania in 1890. His mother died when he was young and his father was in ill-health. He was passed around from various family members and orphanages. At the age of 15, he took to the rails, riding west. A decade later, having no money or job, Carlisle decided to the best way to make a living was robbing trains. Carlisle was no mean bandit, no cold-blooded killer. He is most noted for his daring, as the last of the lone train robbers. In 1916, he held up the passengers on a train in Wyoming. He became known as the “Robin Hood of the Rails” as he returned the porter's coins to make up for lost tips and gave another man a dollar to pay for breakfast. Then he jumped from the car. Union Pacific put up a reward for his capture, which it greatly increased after his second successful robbery. It had been 16 years since their last train robbery and this did not look good. When others were charged with his crime, Carlisle sent a watch he had taken to the Denver Post to prove they were not guilty. He did not want them to pay for something they didn't do. Finally, after a third robbery, he was captured. Carlisle was sentenced to life in prison, later reduced to a mere 50 years, but in 1919, he escaped. Caught again, this time being badly injured, he was returned to prison where he stayed until pardoned in 1936. After that, he went straight, getting married, owned a cigar shop and later a gas station and restaurant. In 1946, he wrote his story, Bill Carlisle Lone Bandit An Autobiography illustrated by C.M. Russell. This is a deluxe edition, inscribed and numbered by the author, along with inscribed by the writer of preface and creator of the end-papers. Item 3. $225.

This is the story of the demise of perhaps the most famous of all western outlaws by a man present at the scene. The book is The True Story of the Killing of Billy the Kid Notorious New Mexico Outlaw as Detailed by John W. Poe a Member of Pat Garrett's Posse to E. A. Brininstool in 1919, published in 1923. Poe had some background in law and was working for a cattlemen's association when he met Pat Garrett. They agreed to cooperate in the fight against cattle rustling so Garrett named Poe a deputy. Meanwhile, Billy the Kid escaped prison where he awaited hanging by shooting his guards. Garrett and many others wanted the Kid, but most assumed he had escaped to Mexico. One day, Poe received a tip that Billy was staying in Fort Sumner, New Mexico. Garrett did not believe it, but decided to check it out, bringing along Poe and one other deputy. Not finding him, they went to the home of landowner and person familiar with Billy, Pete Maxwell. Garrett went inside to talk to Maxwell while the other two men waited outside. In a little while, a bedraggled looking man walked up alongside them and headed to the door. They had no idea who it was, certainly not expecting the Kid. Billy called out to Maxwell in Spanish a few times asking who these men outside were. According to Poe, he was answered with two shots from Garrett's gun. One hit Billy in the heart and he fell to the floor, dead. He never knew. It was too dark. Poe said Garrett knew who it was because he recognized Billy's voice. Item 52. $250.

Here is a book that covers much of the history of early Montana, into the early decades of the twentieth century. The title is The Montana Frontier, by Merrill G. Burlingame, published in 1942. It goes back to Lewis and Clark's visit to the land during their expedition, and covers numerous topics such as the fur trade, Indians, Custer, gold rushes, cattle drives, ranching, outlaws, vigilantes, cowboys, mining, and more. This is a scarce first edition in the even scarcer dust jacket. Item 2. $475.