The Fairy-Land of Science from Underground Books 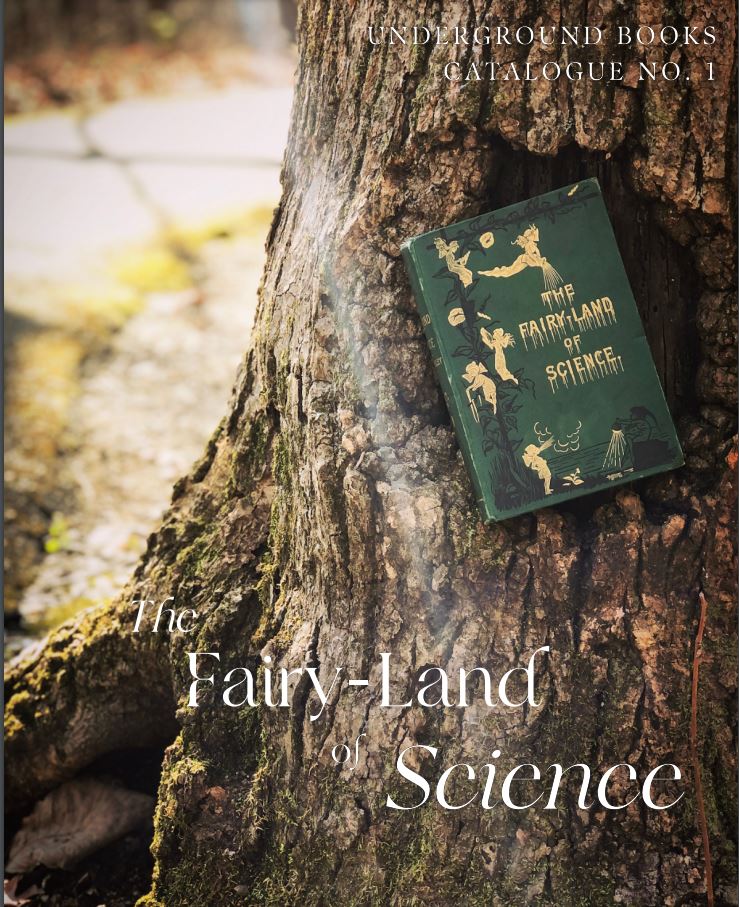 The first catalogue from Underground Books.

We just received the first rare book catalogue from Underground Books. Underground Books is located in downtown Carrollton, western Georgia, and while the catalogue is new, they have been in business for 11 years. It is owned by the husband and wife bookselling team of Megan Bell and Josh Niesse.

The topic of this catalogue is one of Megan Bell's specialties, The Fairy-Land of Science. That is a strange sounding title, fairies and science not often thought of together, sort of like mythical nonfiction. Pick one or the other. It turns out fairy stories were very popular around the turn of the previous century. They were often used to instruct readers in the sciences, by constructing tales that were part mythical but partly science based. Perhaps the concept is similar to Dr. Seuss using the Lorax to teach environmental awareness. There were numerous writers who ventured into this field, and what we see here is they were mostly women writers. They understood the appeal of adding fantasy to what might otherwise be dry teaching. After all, science is fantastic. Here are a few selections from this unusual collection of instructive, semi-scientific books, and some more traditionally scientific ones.

We start with a pair of books from A.L.O.E., which is not a medicinal plant but abbreviation for A Lady of England. That doesn't tell us much but Underground Books informs us she was Charlotte Maria Tucker. She was a prolific writer, primarily for children, and while she here focuses on science, she also conveys her moral lessons. She developed fervent religious beliefs, spending most of the final two decades of her life as a missionary in India. She died there in 1893. The books are Fairy Know-A-Bit, Or, a Nutshell of Knowledge, and Fairy Frisket; Or, Peeps at Insect Life, from 1890 and 1893 (later editions). Fairy Know-A-Bit, who lives in a library, teaches a “spoilt little boy” about such things as the sun and stars, and steam engines, but also has some moral lessons about slavery and emancipation. Fairy Frisket is Know-A-Bit's sister, but unlike her brother, who moved to the city, she resides in the countryside. So she teaches the boy about caterpillars, butterflies, ants and such. Item 7. Priced at $225.

Speaking of ants, item 51 is Solomon's Little People: A Story About the Ants, by James Crowther, a first edition published in 1882. This also mixes science with religion, teaching about ants and other insects, but with morals espoused by its publisher, the Sunday School Union. It describes the ant as “an insect which has attracted the attention of the curious ever since the wise king of Israel directed every sluggard to go to it for wisdom.” How so? Underground Books explains, ants and some other insects such as bees “exhibit such qualities as cooperation, charity, perseverance, and courage through aspects of ant biology and behavior like transformative life cycles, antennal communication, division of labor, and colony architecture and organization.” I now have a newfound respect for ants but still don't like them. We might add ants do exactly what they are supposed to, no disobedience or rebellion from them. They would make an ideal flock for a church, if ants formed flocks instead of colonies. $165.

“There are forces around us, and among us, which I shall ask you to call fairies, and these are ten thousand times more wonderful, more magical, and more beautiful in their work, than those of the old fairy tales.” So said Arabella B. Buckley, who combined fairies with science without having to abandon the latter. Writing primarily for children, she described scientific phenomena such as gravity, electricity, and sound waves as being fairies, but more magical than those of traditional fairy tales. Item 1 is her The Fairy-Land of Science, the edition of 1890. Her devotion to science is not surprising as for 11 years, until his death, she served as the secretary of the great 19th century geologist Charles Lyell. It was Lyell's theory that geologic changes happen at a constant rate over time (slowly). That meant the earth was far older than literal interpretations of the Bible. It enabled Charles Darwin to come up with his theory of evolution by natural selection, which requires a great deal of time. Lyell was a close friend of Darwin, and sort of accepted his theory of evolution, but could never quite get comfortable with it. It went against some of his religious beliefs. Buckley had no such reservations, being a follower of Darwin with whom she too was friendly. $265.

Here is a fairly land filled with all sorts of monsters and strange creatures. It is a “world quite as strange as the fairly-land of Grimm or Lewis Carroll.” However, this one is scientific, it is real, not made-up. It is the world of antiquity, the age of dinosaurs and such fantastic creatures. “Everything you will see here is quite true. All these monsters once lived. Truth is stranger than fiction; and perhaps we shall enjoy our visit to this fairy-land all the more for that reason,” writes author Rev. H. N. (Henry Neville) Hutchinson. His book is Extinct Monsters: A Popular Account of Some of the Larger Forms of Ancient Animal Life, this being a first edition published in 1892. Hutchinson was a clergyman, amateur naturalist and photographer. Item 15. $325.

These are some strange creatures from the plant world, but these too are real and this item is more straight science. The book is Mushrooms in Their Natural Habitats, by A. H. (Dr. Alexander Hanchett) Smith, a 1949 first edition. Smith was a mycologist (a biologist specializing in fungi). He served as Director of the University of Michigan Herbarium. He described his book as being a specialist to accompany people when searching the woods for mushrooms, observing their beauty, or feasting upon them (but be sure to pick the right kind). This book comes in two volumes, but the second volume isn't really a book, though it looks like one. It's a case like a book safe. Inside are 33 stereoscopic reels and a View-Master. The reels contain 231 images of mushrooms. The images were the work of William Gruber himself, the man who invented the View-Master. Gruber had once considered becoming a mushroom farmer and later made a hobby of photographing them. Item 38. $1,295.

This is a second edition (1877) of the first collection of fairy tales by Mary De Morgan. The title is On a Pincushion and Other Fairy Tales. It is a series of stories told among three pins on a pincushion. They are fantastic tales such as elves stealing the reflection of a vain woman and a fire princess and water prince who fall in love. True to the form, there are lesson herein to be learned. Her brother was artist and writer William de Morgan, a close friend of William Morris. These stories originated at a Christmas party when she told stories to the children of Morris and Edward Burne-Jones, and their cousins, which included the young Rudyard Kipling. Item 23. $450.

Underground Books can be reached at undergroundbooksllc@gmail.com. Their website is found at www.UndergroundBooks.net