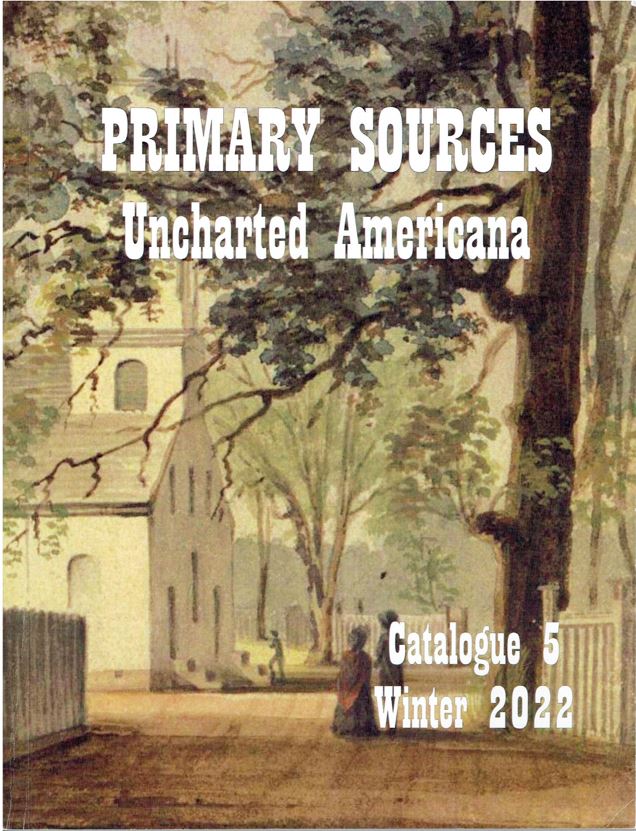 Primary Sources has released their Catalogue 5 of Uncharted Americana. Primary source material is the type created at the time of an event, accounts and images. Rather than history books or later articles, they are contemporary sources, often personal letters, photographs, diaries and such. Contemporarily written material gives you the views of eyewitnesses at the time, not from later recollections or through the lens of history. Here are a few of the 25 items described in this catalogue.

We begin with a letter written during the height of the Civil War by a Confederate officer's father. Of course, he hopes the South will gain its independence, but his views are still very unusual for the Texan father of four sons fighting for the Confederacy. The father/letter-writer was Joseph Algernon Sidney Turner, father of officer Isaac “Ike” Turner (no relation to Tina Turner's abusive husband) and three other sons. It's a long letter, written over several days to an apparent friend or relative named William, covering numerous topics, but eventually evolves into some philosophical thoughts. He believes the war is not so much caused by the differences between the North and South as the human nature to fight each other. He says that since the government couldn't come up with a reason to fight another country, “the warlike & murderous principle in man had to break loose upon his brother.” In an unusual point of view, he states, “We have had an excess of Freedom, which the masses in all ages have not been able to bear, and now we have an excess of despotism north & south.” Is he telling us something about ourselves today? He continues, “There is no worse despotism than to be swallowed up in a military vortex...The south particularly will have to become a military people in order to maintain her independence, and history shows that a military people can not have much freedom...”

A few days later, Turner picks up his pen again and then moves on to discussing religion. He asks what has the Christian religion proposed to do and accomplished in 1800 years. “It has proposed to bring man into subjection to the will of God Almighty and its followers to dwell together in peace and love. Has it been accomplished. You can answer for yourself. I answer No.” He asks whether Christ and his followers fought each other or fought the powers that be, to which he again answered no. He then mentions Catholics and several varieties of Protestantism, even the Universalist, among those who “shoots & murders” his brothers. “One little sect alone,” he adds, is not found in the army murdering each other, the Quakers, whom he obviously admires. He says they alone represent the hope for the triumph of Christianity. Joseph Turner's faith would soon be tested even further, as what he didn't know is that as he wrote this letter, his son Isaac had already been killed in battle in far off Virginia. Item 14. Priced at $2,750.

Alexander Hamilton's demise is well known. One of the great founders of the nation, he died in a duel with one of America's slimiest early leaders, Aaron Burr. Less well-known is what brought them to the the duel that ended Hamilton's life. As far back as 1791, there may have been some hostility when Burr ran against Senator Philip Schuyler, Hamilton's father-in-law, and defeated him. It really boiled over in 1800 when Burr thought he could sneak the presidency away from Thomas Jefferson. In those days, electors voted together for President and Vice-President, the result being that though Jefferson was the party nominee intended to be President and Burr Vice-President, the vote officially ended in a tie. Burr hoped to get the tie-breaker from the opposition, but Jefferson won when Hamilton, despite being his political enemy, threw his support to Jefferson because at least he thought Jefferson honest. Burr was even worse. When 1804 came around, the Democratic-Republicans did not renominate Burr for V.P., so to regain his political power he ran for Governor of New York, only to be defeated by a candidate supported by Hamilton. After the election, Burr heard that Hamilton disparaged him, demanded an apology, didn't get one and challenged Hamilton to a duel. Item 2 is a rare survival from that 1804 gubernatorial election. It was an ugly election with all sorts of charges flying around. This broadside, addressed to Republicans, reminds them that Burr is no longer a member of the party (he ran as an independent), nor even a Federalist. It questions Burr's moral character and describes him as unworthy of their choice. $12,500.

In a time when racism is still far too rampant in the land, it's astonishing to see how much in the way of personal sacrifices some American whites were willing to make for the cause of the abolition of black slavery before the Civil War. One such man was Joseph Pomeroy Root, member of an old-line New England family, a doctor, and state legislator from Connecticut. In 1856, he dropped it all to move himself and his family to the frontier and take on the cause of freedom in the dangerous place that became known as Bloody Kansas. He, like many New Englanders, moved to Kansas in the 1850s to create a pro-free state majority. On the other side were many southerners who moved there to try to create a pro-slavery majority. He joined up with a group of settlers who left Connecticut on March 26, 1856, following a warm send-off from local citizens at an event that featured the well-known Rev. Henry Ward Beecher, who raised funds to purchase rifles for the men. As a result, they became known as Beecher's Rifle and Bible Colony. They settled in Kansas but were ready to fight if necessary for their cause. At one point, Root was captured and briefly imprisoned by a group of Georgians, but was back home in time to witness the sacking of pro-freedom Lawrence, which was followed a few days later by John Brown's act of revenge. Root became a leader of the Free State movement, briefly returned to New England to raise more funds and settlers, and became a leader in the movement to have Kansas recognized as a free state in the union. After statehood, he was Kansas' first Lieutenant Governor, later a doctor with Kansas soldiers during the Civil War, Ambassador to Chile during the Grant Administration, and finally back home to be a physician. Item 11 is a newly discovered daguerreotype photograph of Joseph Root, his only known daguerreotype, from his early days after arriving in Kansas. Root looks straight ahead, a powerful figure dressed in a heavy buffalo coat and thick woolen mittens. He is dressed for winter on the plains. $6,500.

Here is another photo, of a one-armed man whose name has been lost to history. He was a hero to his country, but received little recognition. He is one of the people whom Joseph Root devoted much of his life to securing their fundamental rights. He was an elderly man when this photograph was taken in 1863 in Helena, Arkansas, a Union encampment during the Civil War where many slaves fled to obtain their freedom. A note on the back says the gentleman lost his arm during the War of 1812 in Washington. He likely was serving as a driver or some similar capacity. It continues that he was granted his freedom for his bravery and service, but was later kidnapped, his freedom papers destroyed, and sold back into slavery in Louisiana. He again received his freedom with the Emancipation Proclamation (technically not true as he was residing in Missouri at the time which was not covered by the Emancipation Proclamation as it remained loyal to the Union). The note concludes, “He is past 80 years of age & is dressed in a suit of clothes bought by the money sent from Boston to Miss Mann.” This was Maria Rebecca Mann, niece of famed educator and abolitionist Horace Mann. Most of the slaves arrived at the camp with little more than the tattered clothing they wore. Mann came to Helena, set up a hospital and a school, and arranged for clothes to be sent to her so the former slaves would have decent clothing to wear. Based on the hand writing we know that this note was written by Mann herself. Item 15. $5,000.