The Latest Material from Wessel and Lieberman 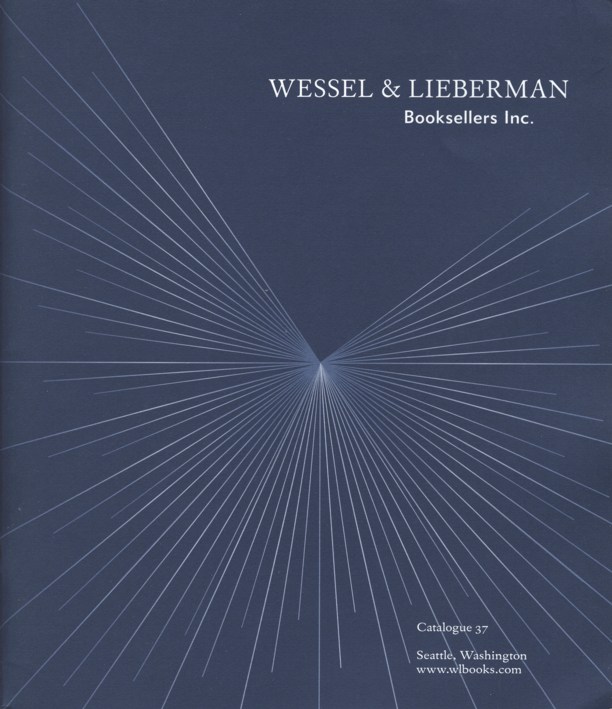 Latest acquisitions from Wessel and Lieberman.

This is our first catalogue from Wessel and Lieberman Booksellers of Seattle, Washington. It is their catalogue 37, and since it consists of recently acquired material, it does not fit into any specific category. And so, you will find literature, bibliography, poetry, art, inscribed books, Americana, science, just about anything. However, we will note that, perhaps because of their Northwest location, there are some very important titles for those who collect Oregon and the travels that brought settlers to that territory. We will give you a few samples of the various items presented, but with the caveat that we can only cover a small portion of the subjects Wessel and Lieberman handle.

Item 53 is the first volume from the Bronte sisters, a talented but star-crossed family if ever there was one. The two eldest of five sisters and their mother died when the children were young, but sisters Charlotte, Emily and Anne created a make-believe world about which they wrote stories in their youth. Then, in 1846, the three collaborated to publish a book of poetry using assumed names. That collection, Poems, by Currer, Ellis, and Acton Bell, was a flop, reportedly selling only two copies. However, a year later, Charlotte would experience a major success with "Jane Eyre." The unsold copies of the 1846 collaboration were then given a new title page and reissued in 1848. Tragically, Emily died that year, and Anne the next. Their only brother also died in 1848, leaving Charlotte the sole survivor of six children. She published two more books and then married in 1854, but a year later, she too died during childbirth. At the age of 38, she lived longer than any of her siblings. A final work was published posthumously. The 1848 second issue of the Bronte sisters' first edition of poetry is priced at $2,500.

If you'd like to read up on the Civil War, here is the perfect opportunity. Item 61 is The War of the Rebellion. The Official Records of the Union & Confederate Armies and Navies. This set includes 159 volumes and was published from 1880 until, who knows, maybe it is still being published today (actually, the final date appears to be 1927). If there is something that was left out of this official record published at the behest of the Secretary of War, you will never know, because you could not possibly read all of it. However, you will definitely impress your friends with your erudition if they see this set parked on your shelves. $3,500 (that's just $22 per volume).

Item 49 is an early promotional booklet for the province of British Columbia. It is entitled Settlers, Prospectors, and Tourists Guide or Travels through British Columbia, by Newton Chittenden. This was published in 1882, displaying the wonders of a new land just being opened up by the Canadian Pacific Railway. It claims the area holds the capacity to sustain a large population. $1,150.