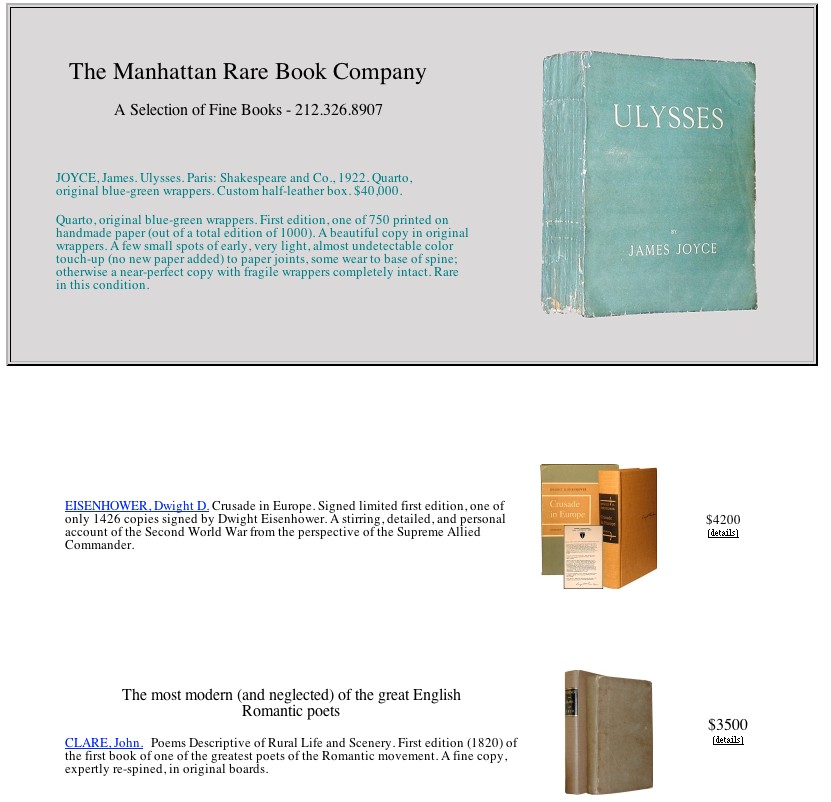 The Manhattan Rare Book Company has issued its latest electronic update of new items and highlights. Included are some literary firsts, histories by leaders who participated in its making, and letters written by some of these men and women of letters. The folks at Manhattan are condition hawks, so you will find these items to be in as good a state as you might hope to locate. Here are a few items from their most recent update.

John O'Hara was a popular though controversial American writer of the mid-20th century. His poor beginnings, and inability to afford college, seemed to be a weight he could never crawl out from under. Nevertheless, he still managed great success as an author. His best-known works included his first, Appointment in Samarra, Butterfield 8, which became a movie starring Elizabeth Taylor, and Pal Joey, a very successful Broadway play. However, prescience was evidently not always his strong point. On May 31, 1938, he typed and signed a letter from London to Leonard Lyons back in the States. Claims O'Hara, "...I don't think there'll be a war right away; for reasons that...boil down to Mr. Hitler's being afraid to start anything (after that you get into the reasons - the reasons why he's afraid to start anything)." O'Hara doesn't tell us what those reasons were, but obviously he was completely wrong. A little over a year later Germany would invade Poland, and the Second World War would begin. O'Hara's letter is priced at $950.

Who could better write the history of that terrible war then about to begin than one of its prime participants, British Prime Minister Winston Churchill? Churchill led his nation through the war's darkest days to final victory. Then he wrote about it. The Second World War is Churchill's six-volume history, published from 1948-1954. $2,800. Then there is a more limited history, of the military campaign, from the American perspective. The book is Crusade in Europe, by Dwight D. Eisenhower, Supreme Allied Commander and later U.S. President. Published in 1948, and signed by Eisenhower. $4,200.

As war was winding down, Harry Truman ascended to the presidency on the passing of Franklin Roosevelt. He would lead America to final victory, through the post-war period and reconstruction of Europe, and through the early days of the East-West conflict and the Korean War. When he left office, succeeded by the immensely popular Eisenhower, he was one of the most unpopular presidents in American history. However, on review, he has come to be regarded by many historians as one of America's best leaders. His containment approach to communism would eventually lead to the downfall of that empire four decades later without firing a shot. Truman's two-volume "Memoirs," Year of Decisions, published in 1955, and Years of Trial and Hope, published in 1956, are offered in very good condition in their first editions, complete with very good dust jackets, and with volume one signed and inscribed by Truman. $1,400.