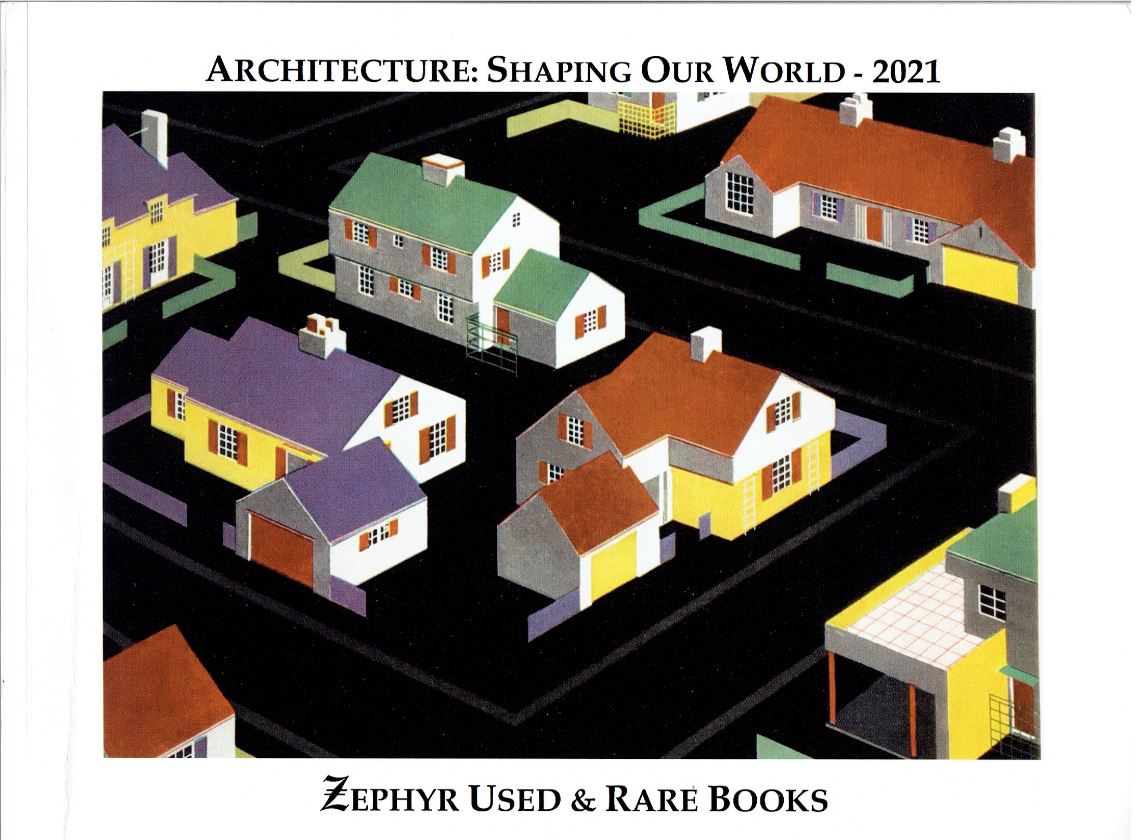 Zephyr Used & Rare Books has issued a catalogue entitled Architecture: Shaping Our World – 2021. This is architecture in its broadest sense. It covers not just building designs and plans but detailed parts, such as sections on paint, wallpaper, lighting, construction materials, etc. The first section looks back with some books and photo albums featuring ancient architecture, but as we move to the “modern” era, most of what we find is very specific promotional material for various products created by their manufacturers or designers. They provide a contemporary view of styles as they were seen in their day, appearances that might look dated today come back to life, their beauty as was seen by their contemporaries. This is an exciting catalogue that makes the past new again. Here are a few samples.

We begin with a collection of architectural plans and illustrations for the construction of the famed Sun Valley Lodge in Idaho, still a premier destination for skiing and luxury. The lodge was commissioned by Union Pacific Railroad Chairman W. Averell Harriman, later an important American diplomat and Governor of New York. Harriman sought out a perfect skiing destination, a place that, naturally, would be serviced by the Union Pacific Railroad. The lodge was designed by Gilbert Stanley Underwood in 1936. The collection includes five large reproduced blueprints, 65 blueprint negatives, original plans for the Sun Valley Lodge and nearby Challenger Inn, and a pencil view panorama of the main lodge. They are kept in a lidded black vinyl box with the Sun Valley lettering and logo on the cover. Item 82. Priced at $750.

The Panama-Pacific Exposition of 1915 was one of a handful of major American world-type fairs. It was intended to celebrate the opening of the Panama Canal, but had a secondary purpose. Taking place in San Francisco a decade after that city's great earthquake, it was designed to show the city's amazing recovery. Item 149 is an album of 52 large photographs displaying the fantastic lighting at the fair. Electric lighting had only been introduced to the public at the 1893 Chicago fair. For 1915, Walter D'Arcy Ryan introduced lighting on a different level from what had previously been used – bare light bulbs. Here we see recessed lighting, floodlights, colored lights, tricks that turned plain light into something that illuminated the park and its buildings so they became a thing of beauty. It was a light show! Ryan was the Director of General Electric's Illuminating Engineering Laboratory. He had previously run the project of lighting up Niagara Falls, so he had perfected the use of light as art. His talents are well-displayed in these photographs. $6,000.

While the previous item focused on architectural beauty, this one is strictly on practicality. There is no beauty here, and in reality, there wasn't as much practicality as was believed at the time. Item 17 is five volumes published between 1950-1967 from the U. S. Department of Defense, Office of Civil Defense. They provide instructions on how to prepare for and react during a nuclear attack. Here you will learn how to build your fallout shelter, how to stock it with supplies, where to place it in your 1950s split level house. I don't imagine they tell you how to shoot your neighbors if they try to get into your shelter, but you can figure that part out by yourself. They do reassure you that “chances of surviving an atomic attack are better than you thought,” and that you had a better than 50-50 chance or surviving even with exposure to severe radiation, which I fear is unrealistically optimistic. Two of these volumes are first editions, the others revised editions. Item 17. $100.

If you are into minimalist architecture, you won't get more minimal than this. Item 46 is Catalogue No. 14 circa 1910 from The Ohio Metal Products Co. It contains descriptions and pictures of Ohio Portable houses (and garages). They provided the corrugated metal pieces and framing that could easily be assembled and bolted together to make your structure. They estimated two or three workers could build your house in less than five hours. Imagine... a new house built in less than 5 hours! These were not the most beautiful of houses, not very luxurious, and quite small. The house doesn't look much larger than the one-car garage (but that is one classic car they show parked in it). It measures 12 x 20. However, they were built to last, guaranteed not to rust out even in 50 years. $295.

Once upon a time... Item 85 is a photo album tracing the construction of the J. H. & C. K. Eagle Silk Mill and associated buildings in Shamokin, Pennsylvania, from 1916-1924. You may not have heard of the Eagle Silk Mill or even Shamokin, PA., but this was once a major industrial town and the Eagle Mill the largest textile building under one roof in America. In contained 500,000 square feet of space. At its peak, it employed 3,300 people with a monthly budget of $5 million. The Eagle brothers were wealthy New Yorkers who decided to build the nation's largest textile factory in Shamokin. It was a growing city ideally located along a railroad. It was a great success for several years, but nothing lasts. Charles suffered terrible insomnia which led to his killing himself in 1928. The mill survived that tragedy, but not the Depression, which was followed by the development of artificial fibers such as nylon and rayon, inexpensive substitutes that decimated the market for silk. In 1938, the mill filed for bankruptcy. It reopened for a few years under new ownership but by 1942 was closed again. A realty company took over and rented space out, and for a while Arrow shirts were made there, but that stopped too. Today the massive structure is long gone, Shamokin is a distressed city, three quarters of its population from the 1920s gone, the railroad no longer stopping there. It is the story of the decline of America's once great industrial towns. However, with this album you can relive this tale from its heyday, while the land was being transformed into a great mill, before it returned to dust. 5,200.