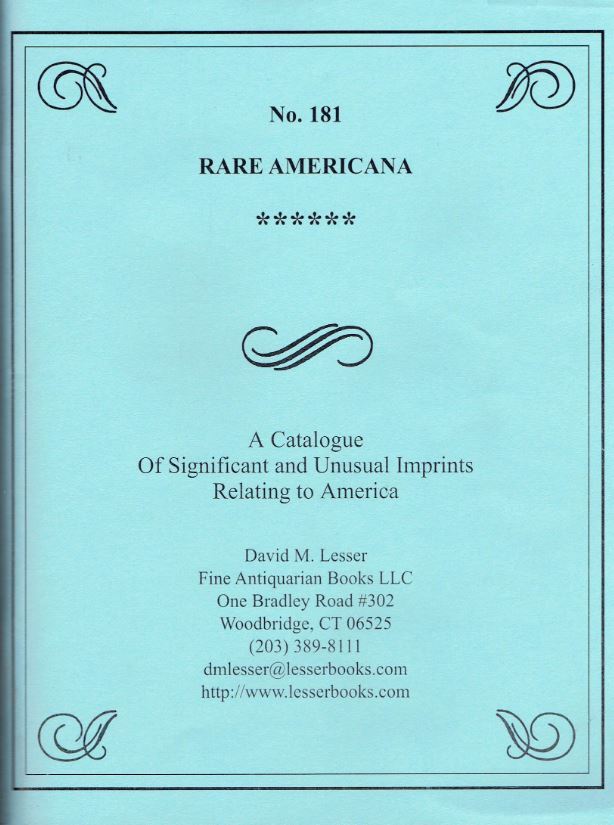 David M. Lesser Fine Antiquarian Books has released a new catalogue, No. 181, of Rare Americana. Lesser specializes in less than full book-length paper, including many pamphlets, broadsides, and other documents, along with a few books. While there are no specifics describing the material, I note that most if not all of the items I am seeing I have not seen before, so I imagine there must be a lot of recent acquisitions. Collectors of Americana will want to see this catalogue. Here are a few examples of what is to be found.

We begin with two photographs of one of the great American explorers, a man little recognized in his own time, though finally receiving some awards late in life. The name of Robert Peary is well-known, and he is recognized by most as the first person to reach the North Pole. He did not get there alone. You can hardly make that journey by yourself. He was accompanied by four Inuit guides and one other American, Matthew Henson. Henson may have been the first person to actually set foot on the Pole though this is uncertain. Item 44 and 45 are photographs by Underwood and Underwood taken in 1926 of Henson, along with a caption on typed stationary below the image. No. 44 shows a standing frontal image of Hanson in a neat suit. Item 45 is a full standing image taken from the side in front of some cabinets and files. In 1926, New York Representative Emanuel Celler tried to get Congress to grant Mr. Henson a congressional medal for bravery and a $1,700 pension, but it didn't happen. The reason for Henson's lack of recognition is obvious – he was black. The Klan was at its high point in the 1920s and the idea that Henson was the equal to Peary did not go over well with the majority of Americans. It would not be until the 1940s that Henson received some awards and fortunately he lived to be 88, long enough to be invited to the White House by Presidents Truman and Eisenhower. Peary met Henson while the latter was working in a clothing store. Henson had prior experience as a seaman so Peary invited him to assist on a mission he was taking to Nicaragua. Peary would ask him back for many more missions, including the famous one, as Henson had many skills, which later included learning the ways and language of the Inuits, critical for survival on this mission. The photographs are priced at $2,500 each.

This is a Currier & Ives print that is still hard to see, even if the tragic event happened over 150 years ago. The caption title is The Assassination of President Lincoln, at Ford's Theater Washington D. C. April 14th, 1865. It captures the moment as John Wilkes Booth fires his pistol, Lincoln barely aware of what is happening, Mary Todd Lincoln still looking at the stage below. Major Henry Rathbone, at the other side of the theater box, sees what is happening and rises from his chair, but it all happens too quickly for him to do anything. America would never be the same. Item 63. $2,000

Here is another Currier & Ives imprint from the same period, but this one is humorous and lighthearted. It depicts an event that happened only a short time later – the capture of Confederate President Jefferson Davis as he attempted to escape the country. The story at the time, an exaggeration, was that Davis had dressed up as a woman as a disguise. Actually, what happened was that his wife had given him her coat to keep warm, but this interpretation made the story more amusing, and supporters of the Union had little sympathy for Mr. Davis. The caption title is The Capture of an Unprotected Female, or the Close of the Rebellion. Four Union soldiers surround Davis and make mocking comments (in cartoon bubbles) while Mrs. Davis exclaims, “I beseech you to let his Excellency alone.” Item 28. $1,500.

People get killed all the time over trivial causes. Here is An Account of the Curtis Homicide from 1879. A shoe clerk named Charles E. Curtis was fitting one Isabel Cottrell with some shoes and evidently made a comment about her feet the lady considered derogatory. She told this to John Poindexter, who felt this offense needed to be avenged. He declared Curtis needed to be horsewhipped, so he and his brother set out for Curtis' shop to exact the punishment. They struck Curtis several times, until a stunned Curtis apologized and they all shook hands. However, Curtis ruminated over the event and decided Poindexter must apologize to him or be caned. When Curtis attempted to get his revenge, Poindexter shot him five times. The verdict was manslaughter. This account from the press of the Richmond Steam Press includes a few advertisements, with one for “Speaking Telephones, Conversation by Wire.” Remember, this is 1879. That is very early. Item 93. $600.

Now for some more killing. Item 113 is A History of the Feud between the Hill and Evans Parties of Garrard County, Ky. The most exciting tragedy ever enacted on the bloody grounds of Kentucky, by Lieut. J. J. Thompson, published circa 1854. This bizarre story comes with an even crazier postscript. The whole affair started many years earlier, apparently a dispute over a female slave Dr. Hezekiah Evans hired from John Hill. Evans claimed Hill encouraged her to flee and return to him. A fight broke out with Hill striking Evans with a stick. The feud simmered for many years until one day, a party of the Hills passed by a barn owned by Evans and a gun battle erupted between the Hills and some associates of Evans working in the barn. By the time it was over, five men lay dead. Eventually, there was a trial, but no one was ever convicted. Now for the postscript, if it is true. According to bookseller Edward Eberstadt, “Lt. Thompson, the author of the startling work, shortly afterward tried to outdo the subtitle when he brutally murdered his own mother, brother, and sister, and was lynched.” I say if it is true as I have been unable to find anything elsewhere about this terrible event, surprising if it actually happened. $1,500.