Japanese, Chinese, and Korean Books, Manuscripts, and Scrolls from Jonathan A. Hill Bookseller 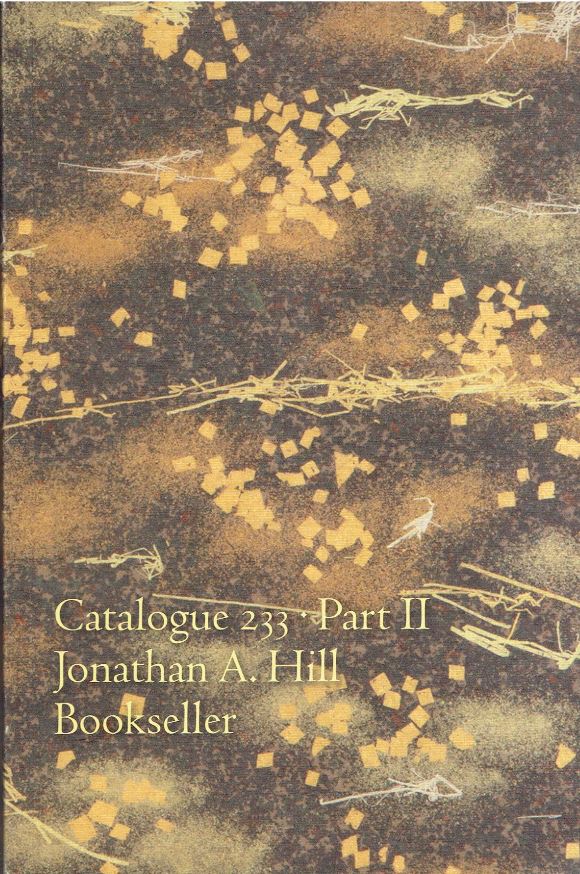 Jonathan A. Hill Bookseller has released Catalogue 233 – Part II of Japanese, Chinese, & Korean Books, Manuscripts, & Scrolls. Most items are manuscripts, many featuring hand-drawn illustrations, while some printed material has been hand-colored. Numerous topics are the subject of these works, though we note a particularly large number are related to medical fields. Considering their age, you might not want to follow everything advised, though many are reasonably helpful for good health considering the paucity of knowledge in their times. Here are a few items found in this latest catalogue.

Japanese citizens weren't doing much foreign travel circa 1855, the nation still being closed (though America was loudly banging on the door). However, there was evidently a lot of travel taking place within the country. Item 56 is Azumako akindokagami [mirror of merchants of the Azuma Association] by Ryosuke Oshiroya. This is a travel guide from Kyoto to Osaka to Hokkaido, covering inns, restaurants, shops, and sites along the way. Hill notes, “we have rarely seen a book so packed with information.” For various cities and towns, the guide provides street maps and ads for all sorts of merchants, including doctors, dentists, sake and tea dealers, hardware stores, dried fish dealers, hotels, and restaurants. It is something like an AAA guide in America, with lists of approved motels. The Azuma association was a group of hoteliers founded by Oshiroya. This guide lists those hotels and restaurants that are guaranteed to be clean and safe. They didn't have ID cards in those days, so travelers were given membership wooden planks, which showed the merchants that they, too, were approved, assuring the merchants that they were trustworthy customers. Priced at $7,500.

Item 16 describes and illustrates 149 places where we will never live. The title is Shuzu goketsuki [plans of feudal castles of the Tokugawa period]. It consists of five illustrated manuscript volumes, with a notation in final volume that it was copied in 1737 by Tadataka Sakai and Minamoto. In 1645, all fiefdom lords owning castles were required to provide a detailed account of their property, sort of a census. It was repeated in 1697. Color illustrations show overhead views of 149 castles, many of which are still standing today. Names, regions, and fiefdoms are provided, along with ownership and a brief history showing when they were built. Some slips of paper with later information are pasted in. $5,500.

The next one comes from China, and it concerns another place we will not inhabit – Yo shi bi she shan zhuang shi [Imperial palace on the mountain estate to escape the heat]. In other words, it's a summer home. Completed around 1713, this book depicts the home and gardens where Chinese Emperor Kangxi lived during the summer. The Emperor oversaw the construction of the residence and a decade later, carefully planned this publication, which celebrated his 50 years of rule, and later, his 60th birthday. Kangxi was China's longest serving emperor, 61 years, and one of its most successful. Four hundred copies were printed on fine paper, 200 in Chinese (as this), and 200 in Manchu. The Chinese edition is printed in black and red, with colored illustrations. Another 400 were printed somewhat later. The Emperor wrote poems which are accompanied by various hand-colored illustrations of the home and gardens, which were appropriate to his stature. This copy has 17 of the 36 folding plates. Item 31. $15,000.

Item 85 is Uo Taiheiki [fish chronicle of peace]. Huh? That one needs some explanation. There was a book written in the 14th century covering a period of war in Japan from 1319-1367. It was part of a genre recounting epic wars that were very popular in Japan. It led to parodies later on which were used to describe then current events through fictional tales. Some used plants and animals as figures in the parodies. There was a plant chronicle and various other titles, leading to this fish chronicle of peace. This book from 1681 recasts the great war as being between fresh-water and salt-water fish. The text and illustrations are filled with puns and double meanings. The figures are actually those of humans but with large fish on their heads. Eventually, this epic war is resolved by a cormorant who, acting as a judge, warns the fish that the only ones benefitting from their war are the fishermen. $7,500.

We usually associate cotton with the American South, but it was an important crop in Japan too. Item 52 is Menpo yomu [the essentials of cotton cultivation] by Nagatsune Okura dated 1833. It has two volumes. The first describes cotton, how it is cultivated, planted, harvested, and fertilized. Woodcuts depict the plant, including microscopic views of the various parts. Volume two shows where it is best grown, what types of cotton are best for different products, and describes its harvesting. At this time, cotton was a major cash crop, more profitable than rice, as it was used for clothing for ordinary people. $7,500.