Humboldt and Bonpland's Voyages to America Offered by Antiquariat Kainbacher 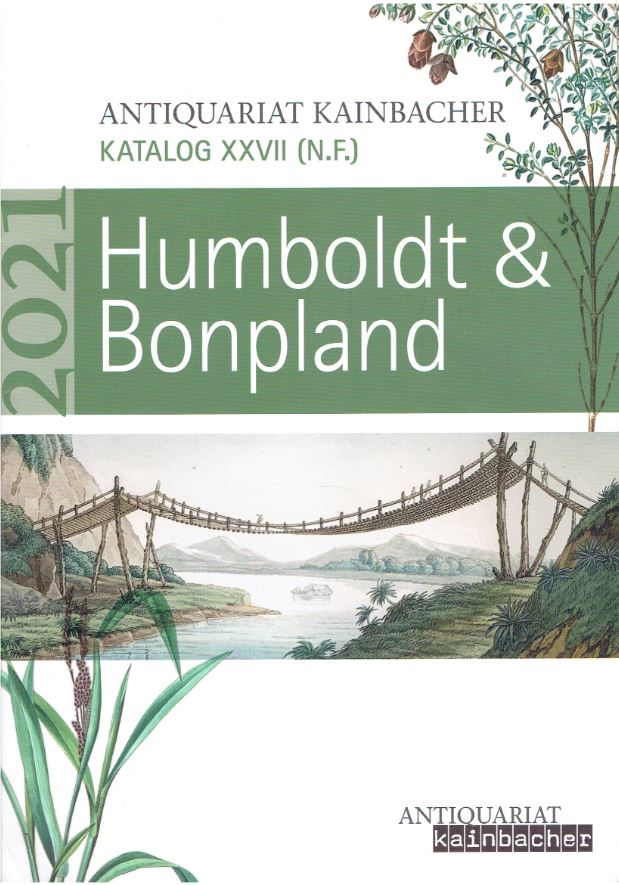 Antiquariat Kainbacher is offering a partial set of the massive work by Alexander von Humboldt and Aimé Alexandre Bonpland entitled Voyages aux Régions Equinoxiales du Nouveau Continent, Fait en 1799-1804 (Voyages to the equitorial regions of the new continent, made in 1799-1804). The entire set consisted of 30 volumes and is virtually impossible to find complete. This set consists of volumes 3-4, 8-9, 17-19, 21-23, and 26-27.

There have been few scientific explorers on a par with Humboldt. This massive account contains the scientific, geologic and other findings of his five-year long journey to South and Central America. Humboldt was a German geologist and naturalist, while his partner in this expedition, Bonpland, was a French botanist. Bonpland's background explains the botanical focus of many of these volumes but there is zoological, geographical, comparative anatomy, cartological, meteorological, geographical, ethological, and other scientific information to be found.

They spared no supplies on their journey, which enabled them to gather so much data. Humboldt had familiarity with all sorts of scientific instruments from his previous travels and brought them all along, from meteorological instruments, to telescopes for location, compasses, pendulums, batteries, and on and on. They even took numerous leyden jars, some of which, not surprisingly, broke during their overland travels. Humboldt had secured permission from Spain to visit their American colonies, which brought the explorers to Venezuela, Colombia, Peru, Equador, Mexico, and Cuba. On the way back, they stopped in the United States, staying for six weeks and visiting Thomas Jefferson, who shared their scientific curiosity.

Considering the amount of equipment they took, and the vast collection of specimens they took back, they required numerous porters, Indian guides, and mules to haul it. They maneuvered along rivers with canoes. While most of the areas they visited were tropical, Humboldt's geological interests led them high up in the Andes, to over 19,000 feet.

On return, Humboldt spent the next 20 years studying their specimens. Their work, with the first volume published in 1807, did not see the last volume released until 1834. In the process, they established a new standard for thoroughness in scientific investigation. Among those who were greatly influenced by Humboldt's standards was Charles Darwin, who would later make his own journey to South America upon which he based his startling revelation. In 1832, he wrote, “I formerly admired Humboldt, I now almost adore him.” One of his most significant creations was iso-maps which use lines connecting geographical locations with equal temperatures, rainfall, magnetic intensity, etc. We see these commonly used for connecting altitudes on geographical maps and average temperatures on weather maps.

Although spending a relatively short time in the United States, there are numerous towns and counties which carry the Humboldt name. Among other landmarks are the Humboldt River in Nevada and the Humboldt Current that runs along the eastern Pacific.