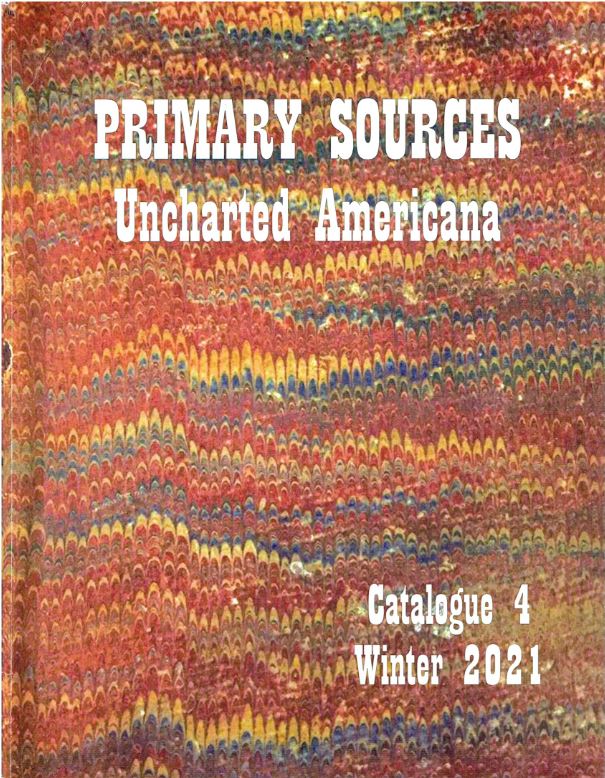 Primary Sources has issued their Catalogue 4 of Uncharted Americana. Primary Sources' catalogues are unlike any others I have seen. There are several which provide detailed, thorough descriptions, but nothing is quite like a Primary Sources catalogue. Their descriptions go beyond thoroughness in describing the items offered. Each one is carefully placed in its historic context. You will fully understand each item's significance and learn a lot of history along the way. Too many historic documents get lost in the fog of ancient memory, their stories unreachable to the causal observer. Nothing is lost in a Primary Sources catalogue, and in the discoveries you will find a lesson in American history. Here are a few examples of the 25 items that are described and photographed in this full-sized 130-page catalogue.

We begin with an item that exemplifies what thorough research can reveal about a seemingly harmless document. Item 11 is a pay ledger from 1847-1849 for Mule Rooms. The “mule” was a large, complex spinning machine used in mills which required an operator and numerous assistants. What is not obvious from this document was for what mill in what location these records were made, or who were the people behind these names. This is where the research comes in. What Primary Sources found was that 35 of the 42 names matched records in census reports for Portsmouth, New Hampshire. They also concluded that the mill was most likely that of the Portsmouth Steam Factory as contemporary newspapers described this mill, which opened in 1846, as “the largest factory building in the world.” Now, we turn to the less pleasant aspect of this story. They checked the dates of birth of these people and found that all but one were born from 1831-1837. That made them between the ages of 10-16, most being in the 12-15 age group, and mostly boys. Those were young teens and pre-teens, working in a mill six days a week. This was child labor at its worst. If the South was built on the backs of Black slaves, much of northern industry was built on the backs of children. The one older person, John Geddes, age 39, is listed in the census with the occupation of Spinner, and he was undoubtedly in charge of the mule and the mule room. Priced at $850.

This is a collection of 15 letters written 1885-1888 from a lonely Wyoming cowboy to a would-be sweetheart he never met. Romance had to be from afar if you lived in the Wyoming Territory, particularly if you were a male as they outnumbered women by a large margin. Most worked on rural cattle ranches where there was no one for many miles but other cowboys. William Gale Johnson was born in Uncasville, Connecticut, in 1861. He would later live with his father who moved to Iowa, but in 1882, moved to Wyoming where he took a job as a cowboy on Tom Sun's ranch. The recipient of his letters, Nannie Burton, was a young lady who lived in North Carolina. Johnson had learned of Miss Burton from an uncle when he visited Connecticut. His uncle met Burton on a visit down South and spoke highly of her, giving her address to his nephew. Johnson tells Burton, and us all these years later, about life as a cowboy in Wyoming when it had even fewer people than it does today. When he first writes, he has a glowing description of the land, its beauty, of how they don't have to feed the cattle as there is grass available year around. He writes in a polite though hardly romantic manner, but then again, he hadn't met the young lady. “I hope our our correspondence will be instructive and interesting and beneficial to us both.” At a minimum, she must have found it such as the correspondence continued for 2 ½ years. Unfortunately, things turned more difficult. Wyoming went on to have one of its most brutal cold winters on record followed by extreme summer heat and a drought. The cattle became thin and struggled to survive, while he feared he would go bankrupt. Eventually, it got better, but he acknowledged it wasn't an easy life and there were long periods of extreme boredom. It must not have sounded very inviting to Miss Burton, and perhaps that is why nothing ever came of this potential romance. Johnson's last letter, written in June 1888, refers to a secret Burton has alluded to in her previous letter, to which he replies he cannot guess what it is, “unless you are engaged to be married.” “If so,” he continues, “that would not surprise me as all of my girls get married and leave me in the lurch.” That probably was the case as Burton was married that September, but fortunately, around the same time, Johnson met Ellen Heenan of Lander, and they would be married and remain so until he died in 1937. Nonetheless, Nannie Burton kept his letters for the remainder of her life. Item 22. $6,250.

A couple of centuries ago, an entertaining piece was the broadside description of some terrible crime, the perpetrator's confession, and an account of his hanging. This one is unusual because it is very early on – 1825 – for what was then the “West,” in this case, Dayton, Ohio. Of course, there was usually a moral lesson in these broadsides, making them more noble in purpose than mere voyeurism. The heading announces, A serious warning to Young Men, or The Life and Confession of John M'Affee. It is accompanied by an image of a hooded figure hanging from a rope. Sometimes, these accounts were written as poems, as was this, though it goes a bit farther. It says, “Written in the true 'Old Ballad' style, and to be sung to the mournful tune called 'Logan Water.'” Hang down your head, Tom Dooley. I had not hard of Logan Water, but you can find it on YouTube if you would like to sing along. Young M'Affee married a woman “kind and good to me, as any woman should be.” It wasn't enough for him. He took up with Miss Hetty Shoup, and that was it. Hetty encouraged M'Affee to leave his wife, but not kill her. He came up with that idea by himself. He bought some opium and gave it to his wife, telling her it would cure the fits from which she suffered. It knocked her out, and then to be sure the deed was done, he strangled her. M'Affee escaped for awhile, but returned home, was captured, tried, and three days later, hanged. “But on Heaven's bright and flow'ry plain, I hope we all shall meet again.” Item 5. $4,250.

They had calculators in the 19th century, but they weren't the electronic gadgets we have today. They were more often called “reckoners.” These were books with tables to help people with calculations. Here are a pair of competing reckoners, very obscure, published in California. One is J. A. Henderson's Intellectual and Practical Lightning Calculator, published in San Francisco in 1872. The other is Howard's California Lightning Calculator, also published in San Francisco in 1873. Primary Sources located two other copies of Henderson's in institutional collections, but was unable to locate another of Howard's. Henderson published again in 1873 but then moved to St. Louis where he published other versions. C. Frusher Howard, actual name Joseph Ostler, had a checkered past, including embezzlement in Australia, but he published many more calculators under another title and eventually made enough money to pay off his debt. Item 16. $1,500.