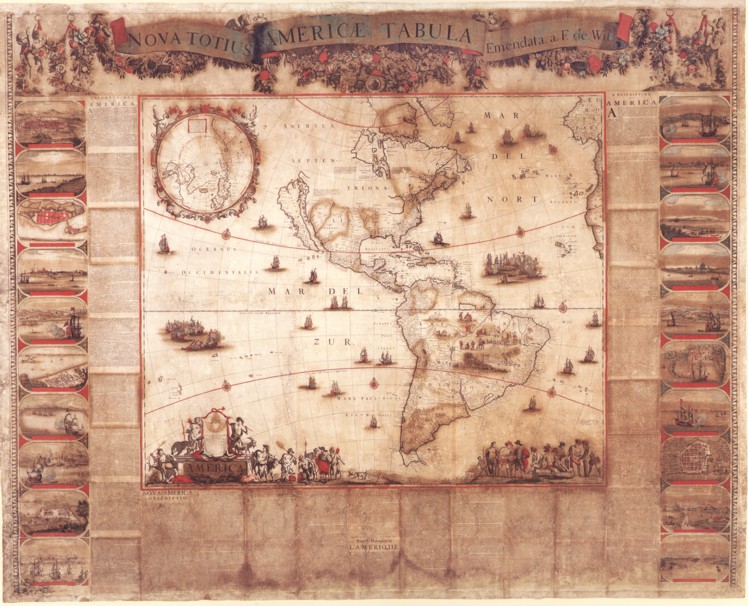 The latest brochure we have obtained from Martayan Lan sets a record for brevity among those we have received, one which may be tied but never broken. In September, we reviewed a brochure that offered just two items, a portrait of Sir Isaac Newton and one of Dr. William Harvey. This time, Martayan Lan has a pamphlet with only one item. One can safely assume that when a dealer prints and mails a brochure for just one item, it must be very special. And so, it is.

This is a magnificent item for anyone who collects American maps. It is a 1672 Dutch wall map of North and South America, and a most spectacular one at that. It is titled Nova Totius Americae Tabula, and was published in Amsterdam by Dutch mapmaker Frederick de Wit. De Wit was one of the great Dutch mapmakers, along with Blaeu and Jansson. His work is noted for the extraordinarily high quality of engravings and the coloring and other artistic beauty of his maps. This particular map, one of only seven known copies in existence, is in unusually good condition.

Along with the actual map of the continents, de Wit has provided twenty vignettes of cities, either views or city plans. Of particular note is New Amsterdam, or at least that is what de Wit called it. The Dutch had ceded the city to the British five years earlier, who had renamed the colony "New York." Evidently, de Wit was slow to recognize this change. The "city" hardly appears to be the worldwide commercial center it is today. It looks more like a sleepy fishing village in de Wit's vignette. Other communities depicted include St. Augustine, Havana, Mexico City, and Buenos Aires. Then there are ports that never became major centers, such as Campeche and several other Mexican cities, Santa Marta, Columbia, and Maurisstaad, Brazil. Oddly, two of the views are of Jaffna Patnam and De Stadt Gale in Sri Lanka. One can only wonder why these two locations half a world away were included on a map of the Americas. Was there a reason, or was it simply an error? We don't know.

The map of South America is well delineated. North America, however, has great gaps. The entire northwest, from the Great Lakes to Alaska, is missing. The territory was then unknown to the western world. California is shown as an island, as it was believed to be in the late 17th, early 18th centuries. At the time it was thought the Gulf of California completely surrounded the territory. The Colorado River emanates from a large lake in Utah, but it can't be the Great Salt Lake. If it were, the Great Salt Lake would not be salty. Perhaps it was the remnants of historic Lake Bonneville. The Mississippi empties as a two-pronged river into the Gulf of Mexico, another common misunderstanding of the day.

Price available on request. Martayan Lan may be found online at www.martayanlan.com or reached by phone at 212-308-0018.