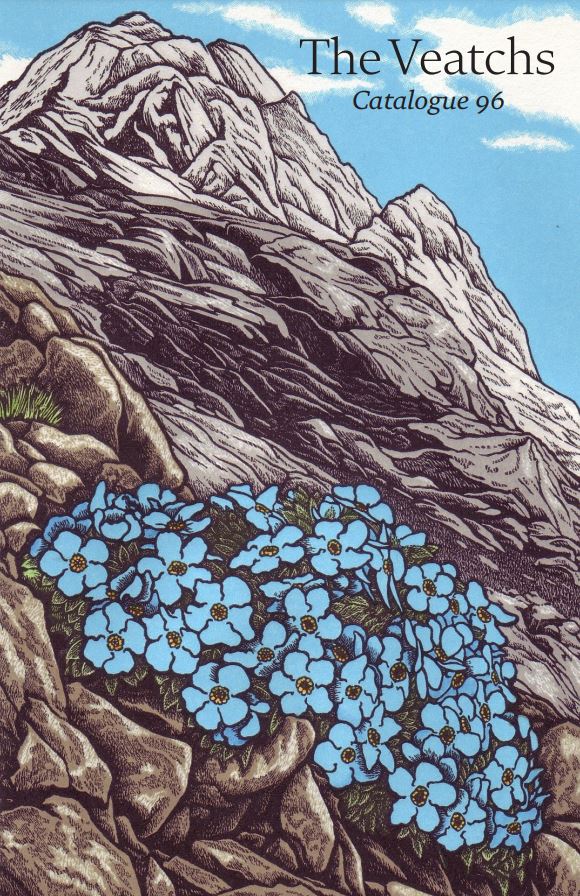 Catalogue 96 from The Veatchs Arts of the Book.

The Veatchs Arts of the Book has issued their Catalogue 96. Here is the long title, which gives you a glimpse of what is inside: New Acquisitions, including a leaf from the Catholicon, Michael Kuch’s first Double Elephant, Michael Russem’s first Kat Ran, a rare marbling book, and a Wiener Werkstatte binding. That covers a few of the items, but there is lots more so you will need a copy to fully appreciate the offerings. Here are few samples.

We begin with an illuminated book from the 19th century, and the workmanship is highly respected. The title is Pearls of American Poetry. Illuminated by T. W. Gwilt Mapleson, Esq. Gwilt Mapleson isn't exactly a household name. Only a few books are attributed to him and he died in 1852 at the age of just 37. However, his skill at illumination is quite evident from this work. The Veatchs describe it, “There are 53 brilliantly chromolithographed pages on hinges, with tissue guards. Each poem is set within a different illuminated border—many with miniatures of birds, animals, humans, and landscapes—reflecting the poem’s theme.” Sabin said of it, “A fine specimen of book-making, every page being illuminated in gold and colors.” The poems come from notable poets of the era, such as Longfellow, Bryant, Whittier, and Mrs. Sigourney. It was dedicated “to the ladies of the United States,” which gives you some idea of its target audience. The book is undated. It has generally been placed at 1853, based on Whitman Bennett's guide to American color-plate books, but this copy has a father to daughter inscription dated Feb. 21, 1849, and Reese has one with an 1848 inscription. This copy is bound in the printer's maroon morocco. Item 8. Priced at $2,500.

Next is a leaf from Johann Balbus' Catholicon. This is a historic book. As the Veatchs explain, “The Catholicon was the first entirely secular printed book, and the first to name its place of printing” (Mainz). Its printing history has been debated, but it is now generally accepted that the first impression was printed by none other than Johannes Gutenberg. After Gutenberg published his bible, he lost his press to a creditor, but he opened a smaller one later where he published a few books. This is believed to be his last. There were three printings, the first of which was made by Gutenberg himself in 1460. The second came in 1469, the third in 1472-3. This is from the second. After Gutenberg died in 1468, his printing “slugs” went to Konrad Humery, but the actual printer was Gutenberg's former associate, Peter Schoeffer. Item 22. $4,500.

This is a later edition of a well-known poem, but a special edition nonetheless. T. S. Eliot's The Waste Land was first published in 1922, but this edition comes from 1961. Eliot was still living then, obvious from the fact that he has signed this copy. This is copy #175 of a limited run of 300. It was printed in Verona, Italy, by Officina Bodoni. The publisher was Faber and Faber, where Eliot was employed as a director for most of his adult life. Item 11. $3,750.

There can't be any name more associated with papermaking by hand than that of Dard Hunter. He was also a printer, typesetter, and naturally, an author, but he was the major authority on handmade papers. In 1933, Hunter set off for the Far East to learn about their small, family paper mills. The procedures there were much different from those in the U. S. He wrote about what he discovered, both concerning papermaking and other details of his travels. The result was this book, A Papermaking Pilgrimage to Japan, Korea, and China, published in 1936. The book contains 51 annotated specimens. This is copy #44 of 370. It is printed on handmade Japanese mulberry-bark paper. Item 28. $2,400.

Here is a massive sampling of dyed paper. The title is The Dyeing of Paper, published circa 1924 by dye maker E. I. DuPont de Nemours. This appears to be something like an atlas volume to accompany a small number of copies of John Roberts' book of the same title. That one contained 150 specimens. This book contains 1,158 mounted specimens. There is also a 35-page summary. The specimens show all the various dyes in three strengths and on five stocks. Specifications for the samples are shown on the facing page. In something of an understatement, the Veatchs point out this was “an incredibly labor-intensive production,” that “required untold hours to produce.” This copy is inscribed to the S. Austin Bicking Paper Co. Seven generations of the Bicking family operated paper mills in Pennsylvania from 1761 until the business was sold in 1946, with the last Bicking exiting the papermaking business in 1992. Item 10. $450.