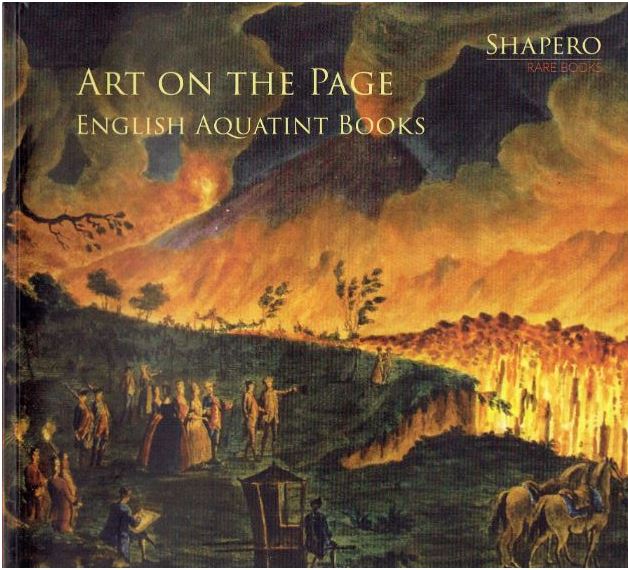 Shapero Rare Books recently published a catalogue entitled Art on the Page. English Aquatint Books. These are mostly books from the early 19th century, occasionally late 18th. This was the period when the aquatint process was most commonly used, and illustrations were often enhanced with hand coloring. The artwork can be exceptional. While the books are English in origin, a great many illustrated travels by the English went to far-off lands. So much was mostly unknown to the English about these lands in those days, making the works fascinating to those back home. Here are a few of the books you will find in this collection.

We begin with some old drawings of sights even older. The title is Views of the Remains of Ancient Buildings in Rome, in its Vicinity. With a Descriptive and Historical Account of Each Subject, by Matthew Dubourg. Dubourg was a popular artist and illustrator from the early 19th century, though not a great deal is known about him personally. He created numerous aquatints, often with John Heaviside Clark under the name Clark & Dubourg. The plates from this book are sufficiently desirable to regularly be sold separately, but this book contains the full 26 aquatints. They have been hand-colored. Offered is the 1844 third edition of a book first published in 1820 and again in 1838. Item 20. Priced at £2,750 British pounds or approximately $3,803 in U.S. currency.

This next book comes from a man who has been described as the most important naturalist you've never heard of. Now you have. His name was William John Burchell. His father was a nurseryman which explains his interest in botany. He sailed to St. Helena in 1805 to become a merchant, but soon tired of it and took up a position as a schoolmaster, and later, official botanist. In 1810, he moved on to South Africa, with his mission being to increase his knowledge. The following year, he set out for the interior of South Africa, where he spent the next four years, studying plants and animals and collecting specimens. Plants were the largest part, his returning with over 50,000 specimens along with another 10,000 of insects and some animal skins. His account of his journey is Travels in the Interior of Southern Africa, two volumes published 1822 and 1824. Among his interesting observations was one concerning hippopotamus meat: “If our English lovers of good eating could but once taste such a steak, they would not rest till they had caused fine lively hippopotami to be an article of regular importation.” I think most of the English still must not have sampled it since, to the best of knowledge, hippo is not yet a popular English dish. Item 11. £5,000 (US $6,916).

There were many books written about the voyages of Captain James Cook, but only one can be the most beautiful. This is it, and also the last of the contemporary accounts of his journey. John Webber was the official artist on the third and last of Cook's voyages, the one that took him to the western coast of America, and the one on which Cook died, killed by natives in Hawaii. However, while many of the accounts of Cook's voyages by participants were rushed out, Webber was in no hurry. He died in 1793, 15 years before this book's first appearance. Webber's images are spectacular, making this unquestionably one of England's finest color plate books. Webber created uncolored versions of these images, but the beautiful aquatints were produced long after he died. While the book is dated 1808, the watermarks on the pages contain a variety of later dates, as late as 1820. The explanation of this is that while the 15 text pages were printed earlier, the 16 aquatints were produced as needed later on, this being far more time-consuming. The book's title is Views in the South Seas, from drawings by the late James Webber, draftsman on board the Resolution, Captain James Cooke, from the year 1776 to 1780. Whoever wrote this title was not entirely familiar with the facts as he renamed John Webber “James” and misspelled Cook's last name “Cooke.” Item 57. £37,500 (US $51,871).

Next is another beautiful color-plate book, one where the illustrations almost literally explode off the page. It is a book about volcanoes, titled Campi Phlegraei. Observations on the Volcanos of the Two Sicilies as they have been communicated to the Royal Society of London. Campi Phlegraei refers to the area around Vesuvius, including some offshore islands. The author was William Hamilton, who studied and wrote books about volcanoes. This is his most notable one. Hamilton travelled to Naples where he hired Pietro Fabris, a local artist, to paint the illustrations while he wrote the text. Together, the two made 22 trips up Vesuvius to capture the illustrations. That was a risky venture as no one knew when the mountain might explode. Hamilton and Fabris appear in some of the illustrations, Hamilton in a red coat, Fabris in one of blue. This copy comes together with Supplement to Campi Phlegraei Being an Account of the Great Eruption of Mount Vesuvius in the Month of August 1779. Published 1776-1779. Item 26. £95,000 (US $131,411).

Next up is a military book, The Martial Achievements of Great Britain and her Allies from 1799-1815. Those dates tell you who England's main foe was – Napoleon. It took the British a long time to dispose of the pesky French General, but they finally did at Waterloo at the end of this date range. Published in 1825 (based on watermarks), this account of the Napoleonic Wars by James Jenkins contains 51 hand-colored aquatints. There is also a hand-colored arms of the Duke of Wellington, to whom the book is dedicated. Item 30, £3,500 (US $4,841).