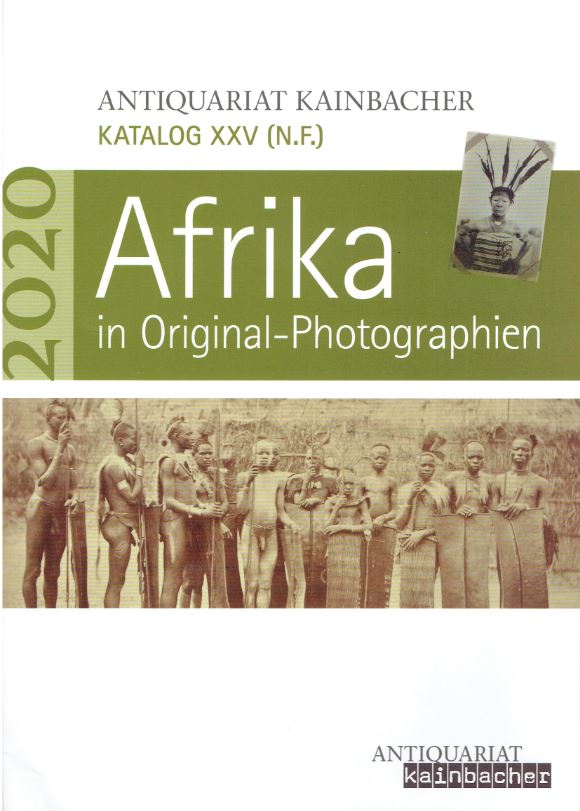 Antiquariat Kainbacher has issued a catalogue of Afrika in Original-Photographien. The title may be in German, but English-speakers will have little trouble understanding what that means. It offers various collections of photographs of Africa around the turn of the twentieth century. This was a time when Europeans were colonizing Africa and putting down rebellions against their rule. The photographers were European. The Europeans were successful in enforcing their rule over other people's homelands through the time of World War II, but after that, the colonial system began to break down, and one-by-one, they had to withdraw and turn the land back over to its native inhabitants. While the main language in the catalogue is German, many come with descriptions in English. These are a few selections from the photographic collections offered.

We begin with an album containing 154 photographs from 1891. The front cover shows the title as Occupation of Mashonaland. Views by W. Ellerton Fry. Mashonaland is the northern region of what is today Zimbabwe, in British colonial days called Rhodesia. In 1888, Cecil Rhodes and his British South Africa Mining Company obtained mining rights in the region. Rhodes formed what was called the Pioneer Column to exploit the land's minerals. He brought along 192 miners and 500 troops from the recently formed British South Africa Police Company to guard his operation. One of the people who came with the Pioneer Column, as official photographer, was William Ellerton Fry. His photograph album provides a visual account of the Pioneer Column's march to and formation of Fort Salisbury, today the site of Zimbabwe's capital of Harare. Among the photographs are the first ever taken of the ruins of the ancient city of Zimbabwe. Ultimately, Rhodes' ambitions proved to be more than just mining, but the takeover of the country to become a British colony. Priced at €40,000 (euros, or approximately $47,147 in U.S. dollars).

Railroads have long been a popular subject for collectors, so here are some related photos from Africa. They concern the building of what today is the Ghana Railway Co. but what at the time (1913-1922) was the Gold Coast Government Railway. There are over 450 original photographs in this collection, covering both the first built Eastern Division, starting from Accra, and the Western Division. Numerous photos depict the railway camps from the time they were built to the many local stations along the way. Many show the railway being built and the people involved, some being portraits of several surveyors and engineers. They are shown at work and at play including Christmas celebrations in 1913 and 1914. Other features of the territory are also seen, such as villages, rivers, roads, mission schools, plantations, and native railway workers and other local inhabitants in front of their huts. €12,000 (US $14,144).

Here is one that will appeal to mountain climbers as well as collectors of Africana. The title is Zum Schneedom des Kilimandscharo. 40 Photographien aus Deutsch-Ostafrika mit Text (To the snow dome of Kilimanjaro. 40 photographs from German East Africa with text). The author was Hans Meyer, publication date 1888. Kainbacher describes this as “By far the rarest work by Hans Meyer and at the same time one of the great rarities about East Africa and especially the Kilimanjaro area.” This is an account of Meyer's first attempt to reach the summit of Kilimanjaro, in 1887. He came within about 1,000 feet of the summit before being forced back, his equipment insufficient to handle the deep snow and ice. It was the highest any European had climbed the mountain up to that point. He made a second attempt in 1888, only to be kidnapped during a revolt and freed only after paying ransom. Finally, in 1889, he made a third attempt and this time he reached the top. This book contains 21 pages of text, 40 photographs on 20 plates, and one map. €9,000 (US $10,599).

Next we have three contemporary albums with 120 mounted photographs, marked with the spine title Fouilles de Karnack (Excavations in Karnak). The photographer was French Egyptologist Georges Albert Legrain. These photographs were taken during excavations in 1903. Legrain had first gone to Egypt as part of the French archeology institute in 1892. By 1895, he was appointed overseer of the temple at Karnak, located near the current city of Luxor. However, it was in 1903 that he made his stunning discovery, pictured in these albums. He came upon what was is known as the Karnak Cachette, a cache of buried artworks believed to have been buried by the temple priests. It consists of around 800 stone statues, 17,000 bronzes, and other artifacts, the largest hoard of such items ever discovered. A few go particularly far back in time, to perhaps around 2,000 B.C. though most come from later periods, including that of Ptolemy, the first few centuries A.D. €16,000 (US $18,836).

This collection of photographs along with a manuscript comes from Madagascar in 1895-1898. The compiler is unknown, but his picture within the album reveals he was a French colonial official. France had been involved in Madagascar for over a decade when it began seizing control in 1894. Queen Ranavalona III was forced to surrender in 1895, France annexed the island in 1896, and in 1897 made it a colony. Madagascar regained its independence in 1960. The album opens with pictures of ex-Queen Ranavalona III and her husband, the ex-Prime Minster, the Queen's niece and the ex-Minister of the Interior. It goes on to display historically significant photographs of the execution “of two ministers” from the time of the takeover. The images depict the “presentation of executors,” “the last minute,” “the shooting,” and “removal of bodies.” Another shows the public “submission of the chief of rebels Rabosaka.” Other photographs show views of scenes and of ordinary people, along with some of the French military. The manuscript describes some of the places the author visited. €12,000 (US $14,144).