Art Books and Book Arts from Jonathan A. Hill Bookseller 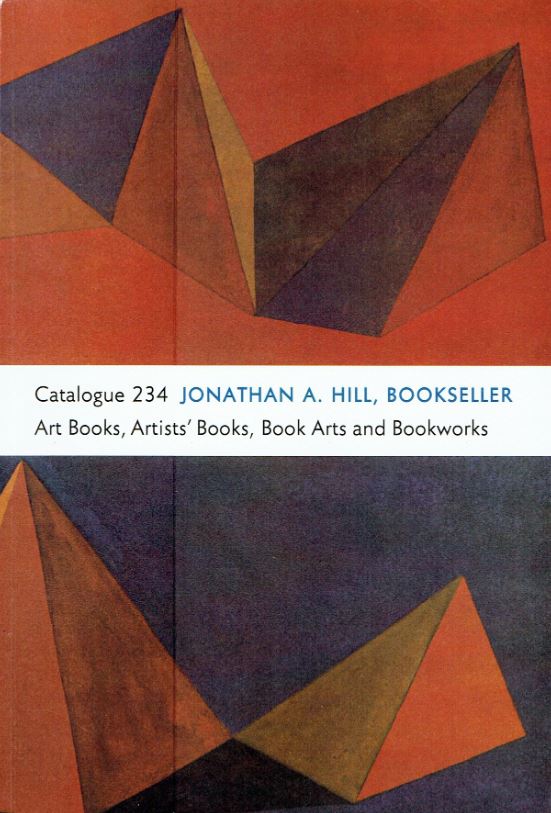 Jonathan A. Hill Bookseller has released Catalogue 234. Art Books, Artists' Books, Book Arts and Bookworks. Considering the number of appearances of the words “books” and “art” in the title, it is clear the items here represent the meeting of arts and books. Another way of explaining it is the catalogue contains (mostly) printed material related to the arts. Included among the items is a great number of art auction catalogues, rare finds from sales that took place in the 18th and 19th centuries. Most of these are in French, but that is not the case with many of other items. Here, now, are a few selections from this catalogue of art-books.

We start with a catalogue for an exhibition you would really have wanted to attend. Unfortunately, you were born too late. It took place in 1889. On display at the Galerie Georges Petit in Paris were works by painter Claude Monet and sculptor Auguste Rodin. It's been well over a century since the exhibition yet both are as highly regarded, or even more so today as they were then. Monet displayed 145 of his recent works while Rodin displayed 36 of his sculptures. Hill notes, “Up to that point the art world had rejected Monet's groundbreaking compositions, but the event proved to be the turning point in Monet's career.” Reportedly, the two started out with a rocky relationship, Monet feeling Rodin's works were blocking the view of his own and Rodin expressing that he didn't care. However, by the end, the two became friends and corresponded regularly with each other until Rodin's death in 1917. This catalogue lists the works of each artist chronologically, along with presenting critical essays of each artist's work. This is #2 of 20 copies on Japon paper out of a total of 60 printed. It comes with the rare printed invitation laid in. Item 62. Priced at $5,000.

Next is a program for a French celebration, a festival book, but this was a festival with very dark overtones. Revolutionary France had invaded Italy in 1797, using its power to force the Italian states to surrender. The fast-rising general, Napoleon, represented the French in signing the peace. One of the conditions of the treaty was that the Italian states agreed to allow the French to enter any building, public, private, or religious, and take any art works and other objects such as antiquities, medals and scientific instruments they wanted. The French selected over 100 of them and took them to France to put on display. This program is ironically titled Fetes de la Liberté, et Entrée Triomphale des Objets de Sciences et d'arts recueillis en Italie (celebrations of liberty, and triumphant entrance of the objects of sciences and arts collected in Italy). Most of the plundered objects were returned to Italy after Napoleon's defeat. Item 30. $1,500.

Here is another exhibition catalogue, this time from America. This is a Catalogue of the Seventh Exhibition of Paintings at the Athenaeum Gallery from 1833. This is the Boston Athenaeum, one of America's earliest membership libraries from the days before there were public libraries. It is still in operation today. The collection belonged to early English undersea telegraph engineer John Watkins Brett. Brett had a motive for bringing his collection to America for display. He hoped to sell it, and to a single buyer. He thought Americans would want it. The collection included works attributed to da Vinci, Rembrandt, Titian, and Rubens. They are glowingly described in the catalogue, most likely written by Brett. However, Brett did not achieve his aim as his collection was sold at auction after he died in 1863. Item 13. $450.

This is one of the more unusual books you will ever see. It contains no text or images, no printing. Sounds like a simple book to create, no? No. It is the creation of American artist, photographer, bookmaker Keith A. Smith. The title is simple as was most of his book titles. This one is Book 91, one of 50 copies (non-print run?) from 1982. He's well over Book 200 now. It is familiarly known as the “String Book.” Strings run through holes in the pages, sliding or providing tension as the pages are opened (open carefully). The holes are also designed to show patterns of light. The “author” recommends placing a light source at a 45 degree angle three feet away. The light shining through the holes creates changing shapes of circular spots and shadows as the pages are opened and turned. Hill notes that some of the small run of copies are held in the most prestigious collections, including the Library of Congress, Bibliotheque Nationale of France, the Getty, Harvard University, New York Public Library, and the Victoria and Albert Museum. Item 77. $55,000.

Item 5 is a 1683 guide to the Basilica of St. Denis, just north of Paris: Inventaire ou Dénombrement, tant des Corps Saints et Tombeaux des Rois... (inventory and enumeration of the bodies of saints and tombs of the kings). The basilica of St. Denis is a remarkable place. It is the burial place of the French kings who ruled from the tenth to the eighteenth centuries, and several whose reigns were even earlier. The first is Clovis I, who united the French tribes under one ruler in 466. The last is Louis XVIII, who ruled as King when the monarchy was restored following the defeat of Napoleon, until his death in 1824. There are also numerous other royals and saints buried there. The guide includes brief biographies of the kings along with a description of the interior of the basilica and of some of the relics held there. $950.