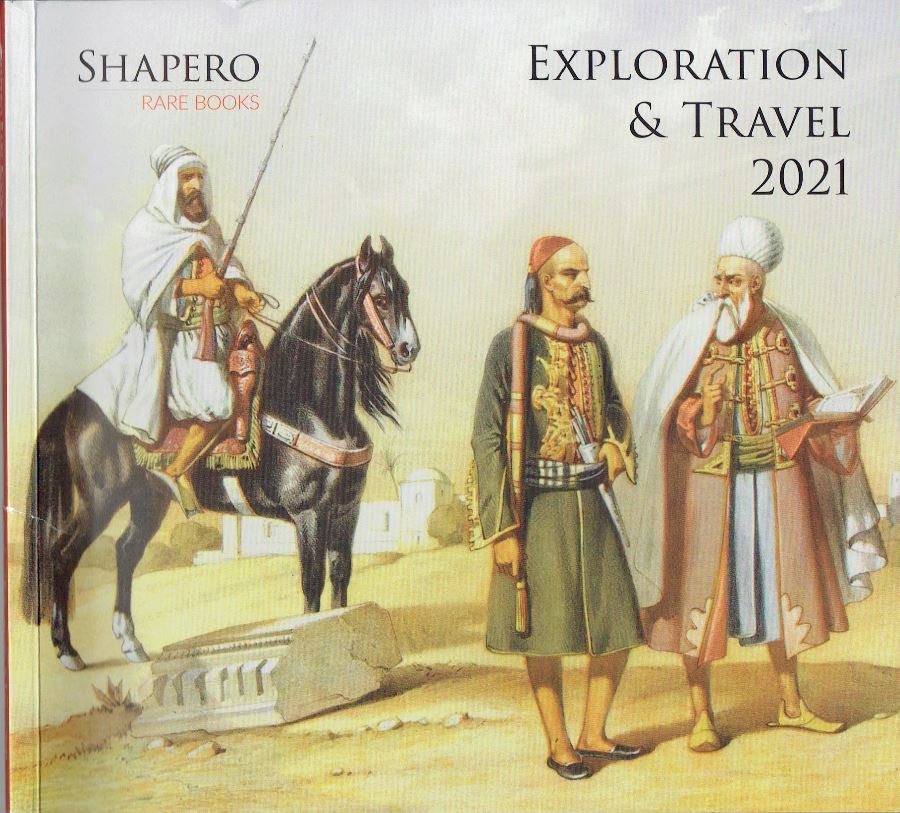 Shapero Rare Books has published a catalogue of Exploration & Travel 2021. These are mostly travels and explorations that began in Europe and took place in the 17th-19th centuries. While the majority are in the English language other European tongues are also well-represented. The table of contents has only three headings which show where most of the destinations were located: (1) Africa, (2) Greece, the Ottoman Empire & Central Asia, and (3) the rest of the world. Here is a selection of books from this latest Shapero catalogue of travels.

We begin with the first account in book form of David Livingstone's travels in Africa. Long before he was presumably found by Henry Stanley, the missionary explorer was roaming around parts of Africa rarely seen by anyone from the West. However, while a first, it is not a typical explorer's book. As the preface notes, “in giving the world the first authentic narrative of the important explorations of Rev. Dr. Livingstone, the publishers have to acknowledge their obligations to the spirited conductors of the British Banner, in whose columns, in detached portions, this remarkable history first appeared.” In other words, they cribbed the account. The title is A Narrative of Dr. Livingston's Discoveries in South-Central Africa, from 1849-1856, published in 1857. We can be fairly confident Dr. Livingstone did not assist in the writing of this tome nor even proofread it since his name is repeatedly misspelled throughout the book. Item 29. Priced at £1,500 (British pounds or approximately $2,100 in U.S. dollars).

Next we have Letters of the Late Ignatius Sancho, an African. This is the 1784 third edition. Sancho was an amazing man for his time. He was born a slave on a slaver, crossing the ocean from Africa to South America. At the age of two, his mother died and his father committed suicide. Young Sancho was taken to England and put under the care of three sisters. The Duke of Mantagu was impressed with the boy's intellect and provided him with books. Sancho later left the sisters and settled in the Duke's household. He would go on to be a literary critic, correspondent, and successful grocer. He corresponded with many of the great writers and artists of the day and his opinions were highly valued. Obviously, this was unusual, even unique, for an African in that era. He also wrote letters, gathered for this book, expressing the view that all persons should be treated equally, regardless of race or religion. These letters were compiled in a book to show that Africans had the same intellectual capacities as whites if only given the same opportunities. This would be an important work for the burgeoning abolition movement in England. Item 47. £2,250 (US $3,144).

I'm not sure which is the historically most important voyages undertaken, but outside of Columbus and Magellan, these would have to be top contenders. They are the three voyages to the Pacific undertaken by English navigator Capt. James Cook. The first was officially conducted to observe the Transit of Venus, but Cook then opened additional instructions that had him map New Zealand and be the first westerner to visit eastern Australia. On the second, he was sent to determine whether the long assumed huge southern continent existed. After sailing farther south than anyone before and still not finding land, he concluded that no such continent of massive size existed. Finally, his third voyage led him to chart the western coast of North America and visit Hawaii, where, unfortunately, Cook was killed by natives. Official accounts were prepared for each voyage, the first written by John Hawkesworth, Cook not having time before setting out on his second. The second was prepared by Cook, and the third by Cook and Captain James King as Cook did not survive to complete it. Item 117 is the complete set for the three voyages, eight text volumes and the atlas, all in first editions. £35,000 (US $48,933).

Next is an overland journey to India in the late 18th century. The title is A Journey Over Land to India, Partly by a Route Never Gone Before by any European... in a series of letters to his son. Comprehending his shipwreck and imprisonment with Hyder Alli, and his subsequent negociations and transactions in the East. The author and traveler was Donald Campbell, the book published in 1796. His route took him to Venice, Alexandria, Cypress, Aleppo, Baghdad, Basra and Bengal, which doesn't sound like the easiest journey, perhaps explaining why no one had ever gone that way before. Eventually he crossed water to India only to be shipwrecked off Goa and imprisoned. Once released, he traveled around India and eventually to China before returning home to England four years after he left. Item 71. £1,000 (US $1,397).

This next book is an account of what, at the time, was the farthest journey south ever to that point. However, the captain, James Waddell, was not an explorer. He was a sealer. On his first journey south, he brought back an enormous haul, but competition lessened the success of his second, and on his third, seals had become scarce, leading him to sail father south in hopes of finding uncharted land. He did not, instead finding more water, an area now known as the Waddell sea. However, in the process, he reached farther south than anyone before, besting the record of James Cook. Item 132 is A Voyage towards the South Pole, performed in the years 1822-24. This is a second edition from 1827. It adds an account of his sister ship, commanded by Captain Matthew Brisbane. Brisbane also writes about Tierra del Fuego, the islands located between South America and Antarctica. £3,500 (US $4,891).