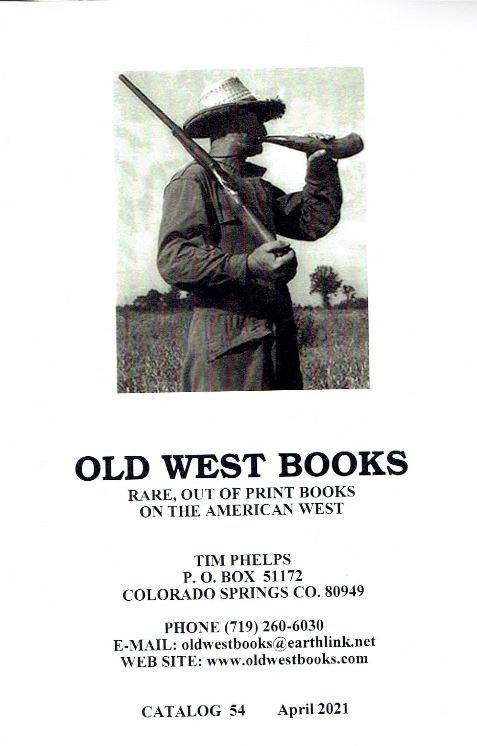 We recently received Catalog 54 April 2021 from Old West Books. Their specialty is “rare, out of print books on the American West.” Those were the days when masked men were the ones to be feared, rather than the unmasked ones. Times change. The outlaws and gunslingers never inflicted the mayhem of today's unseen killer. But, hopefully, it will soon be safe to travel to the American West again and visit the landmarks. I'm ready to go. Here are a few selections from this latest catalogue.

We begin by going back to the older Old West, to the days before outlaws and gunslingers, when the American Southwest was the Mexican North, prior to the Mexican War. The book is Commerce of the Prairies: or, The Journal of a Santa Fe Trader, during Eight Expeditions across the Great Western Prairies, and a Residence of Nearly Nine Years in Northern Mexico, published in 1844. The author was Josiah Gregg, neither a gunslinger nor Indian fighter. He traveled west for his health and became a merchant. He made the journey from Missouri or Arkansas several times between the years 1831-1839. Gregg was a keen observer of what he saw which he relayed in this book. It became very popular, not only in America but in England and Europe through translations to French and German. He described the geology, geography, culture, and natives he saw along the trail. He also developed a great interest in botany, with several plant species being named for him. Though a merchant, much of what Gregg did could be described as explorations, such as finding a new trail west. In 1849, he went to California for the Gold Rush, but on an expedition to the northern part of the state, he did not find a good way back and died from a combination of starvation and illness. Item 16. Priced at $3,750.

Next we have another account written about the Santa Fe Trail, this time written by a young woman. She was a contemporary of Gregg and read his description of the trail. In fact, the first part of her book is said to greatly resemble that of Gregg. Her name was Susan Magoffin and she accompanied her husband, Samuel, also a trader. She was just 19 years old and recently married when she went off on her adventure. They made their way from Missouri to Santa Fe in the summer of 1846, but after a few weeks there, continued their journey. The U.S. had recently gone to war with Mexico and the Magoffins followed not too far behind the soldiers. They made their way to El Paso del Norte and later continued south into territory still part of Mexico today. She became quite ill a few times but completed her journey. The Magoffins returned to Kentucky in 1848 but her health was never strong again. She died in 1855 at age 28. Her account, published as a book in 1926, is titled Down the Santa Fe Trail and into Mexico, the Diary of Susan Shelby Magoffin, 1846-1847. This is a presentation from Mr. and Mrs. Beriah Magoffin, stating “Eighty year old diary just published... Much of our family history.” Item 22. $400.

The U.S. Mexico border was set after the conclusion of the Mexican War in 1848, and again a few years later after the Gadsden Purchase. It has largely remained unchanged since then, except for some tweaking here and there. In 1889, the two nations agreed to set up the International Boundary Commission and a new survey was authorized to determine the border. From El Paso to the Gulf of Mexico, it was subject to minor changes as the Rio Grande forms the border, but the river channel is subject to wandering. To the west of the Rio Grande, it would be more fixed, but by then, most of the boundary markers set in the 1850s had disappeared, so a new survey was needed. Item 50 is the official senate report of that portion of the official boundary survey, Report of the Boundary Commission upon the Survey and Re-Marking of the Boundary Between the United States and Mexico, West of the Rio Grande, 1891 to 1896, published in 1898. The description of the boundary is valuable but perhaps what makes this report especially appealing is the photographs. There are 258 of them displaying boundary markers and scenery along what is barren yet beautiful, the desert scenery that dominates this part of the route from Texas to California. $2,000.

America's natives never had a chance against encroaching whites. Sheer numbers and weaponry made the result inevitable, though many fought to retain their land and way of life as long as they could. One of the most notable was Sioux warrior Crazy Horse. He fought many battles, including the Indians' most famous victory, that at the Little Big Horn. General Custer got the surprise of his life... and death. Item 6 is Chief Crazy Horse, His Career and Death. It is contained in the Nebraska History Magazine Extra of December 1929. The history was written by western author E. A. Brininstool, who later wrote a book about Crazy Horse published in 1949. Crazy Horse held out as long as he could, but in 1877, the leaders of his band of Sioux, isolated and starving, agreed to surrender to the army. While under their care, he was stabbed to death. Brininstool tracked down the accounts of witnesses to that tragic ending to reconstruct the warrior's death. This copy was inscribed by Brininstool to Frederic Van der Water, an author and critic of Custer. At the bottom of page 29, Brininstool has written, “line dropped. Greatest Indian that ever wore a moccasin.” $450.

This item takes us back in history to Texas at a time predating all the stereotypes we have of Texas today. It was an era when the land was controlled by Indians, western connections limited to an occasional explorer and Spanish missionaries seeking to save the natives from themselves (but not from the Spanish). The title is History of Texas 1673-1779, published in two volumes, much later (1935). However, it is the first complete publication of a contemporary manuscript by Fray Juan Agustin Morfi. Morfi was asked to accompany an inspection tour of some far outposts of northern Spanish Mexico in 1778. After his return home, he composed this manuscript concerning the area he visited. His translated manuscript was published by the Quivira Society, which published a number of historical accounts of the American Southwest and Mexico in the mid-20th century. Item 39. $250.