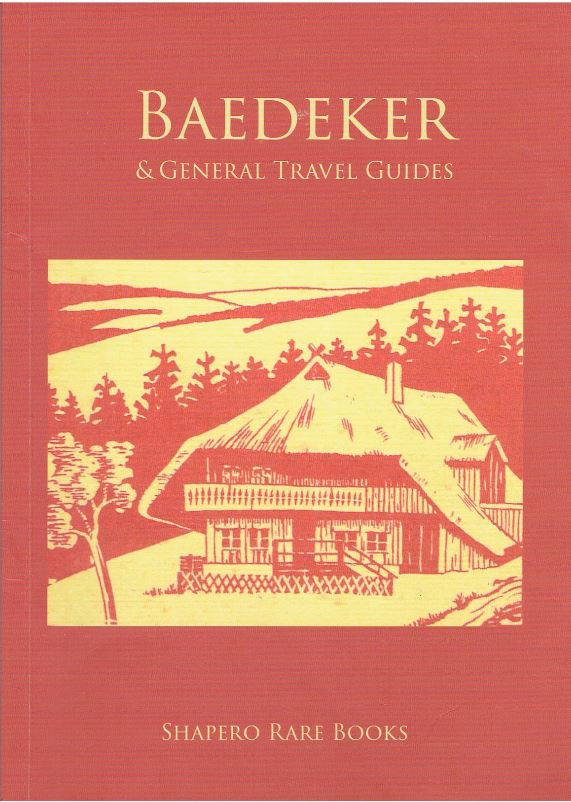 The latest selection of Baedeker and other travel guides.

Shapero Rare Books has published their third recent catalogue of Baedeker & General Travel Guides. For those seeking to tour the world, Europe in particular, but the Middle East, America, and occasionally even Asia, these are the guides you needed in the 19th and much of the 20th century. Baedeker published in Germany, but their guides were not limited to those visiting Germany, or those from Germany looking to tour the world. They published guides in German, French and English that were useful for visiting foreign countries or even your own, depending on where you lived. Of course, the two great wars were very disruptive to their business, and the Second World War almost put them under, but they managed to survive if not quite the same.

While most of the guides are from Baedeker, there is also a large selection from John Murray. Murray's guides were published in England during the 19th century and are all in English. They offered many guides for targeted areas within England, clearly useful for the British looking to tour at home, but they also published many guides for continental Europe and America. Finally, there are miscellaneous guides from various other publishers. Here are a few samples of the sort of guidebooks you will find in this catalogue.

Baedeker began publishing their guides early in the 19th century, but it was not until 1887 that they got around to one for Great Britain. This was published in English, and served as the basis for the German edition which was published a year later. It is very scarce today. Item 64. Priced at £500 (British pounds, or approximately $685 in U.S. dollars).

Here is another first English (language) edition, and this one is very rare. It is not only a first but also an only edition. There must have been a limited demand for guides to this tourist outpost. Item 84 is Madeira, published in 1939. That date couldn't have helped either as England was about to go to war. Shapero notes that only a few copies were distributed and many were destroyed by the war. Madeira is a Portuguese island off the northwest coast of Africa and its major appeal is as a tourist spot. This guide contains 24 maps and plans. £1,500 (US $2,055).

Next we have Baedeker's first guide to America. Published circa 1893, the title is United States with an Excursion into Mexico. Later, they would add Cuba, Puerto Rico, and Alaska to this guide, but the first edition was more limited. This guide was also first written in English, the author being J. F. Muirhead, who later published his own guides. It includes 17 maps and 22 plans. Item 108. £400 (U.S. $548).

If you prefer to read about America in French, Baedeker was accommodating. Item 123 is Etats-Unis, published in 1893, slightly after the English language edition. This is the first of only two guides to the United States published in French. Like the English edition, it contains 17 maps and 22 plans. £350 (U.S. $480).

A year later, Baedeker printed its first guide to the rest of North America. Item 7 is Canada with Newfoundland and an Excursion to Alaska. It was published in 1894 and is the first of only four editions for Canada. This guide was only ever published in English. It was also written by the writer of the United States edition, J. F. Muirhead. It contains 10 maps and 7 plans. £350 (U.S. $480).

This Baedeker is not a geographical guide but a language guide. The title is Manual of the Russian Language. It is designed to help English-speakers converse when visiting Russia. It was meant to accompany the 1914 edition of the English-language guide to Russia. It was issued just before the start of World War I and the Russian Revolution. Shapero notes that not many copies of this guide have survived. Item 85. £5,000 (U.S. $6,852).

Here is another guide that was published just before the War to End All Wars (which it didn't) began. Its title is Agypten und der Sudan. This one, obviously, is in German. Egypt was still part of the Ottoman Empire, though it wouldn't be much longer. This is a seventh edition with 21 maps, 84 plans, and 55 illustrations. Item 145. £200 (U.S. $274).

Next is Handbook for Switzerland. This guide was published in 1838 by John Murray. It is the first edition and as an early Murray guide it was written by John Murray III. There would be 18 more editions by 1904. It comes with a two-page “Corrections and Additions,” and has a folding map and panorama. Item 309. £600 (U.S. $822).

If you'd like to save a few bucks, you can always by the pirated edition of the preceding guide. However, the pirate issue is quite scarce so you won't save a lot, it now being collectible in its own right. It does not have a map. Item 311. £500 (U.S. $685).

The need for fighting the Second World War is obvious, but the first one makes you wonder was this all necessary? There was terrible suffering, and the world that emerged quickly sewed the seeds for the even worse conflagration two decades later. This next guide brought back memories of this terrible war for Americans, Guide to American Battle Fields in Europe. It contains three large folded maps in a rear pocket and numerous illustrations. It was published by the Government Printing Office in Washington in 1927. Item 321. £150 (U.S. $205).