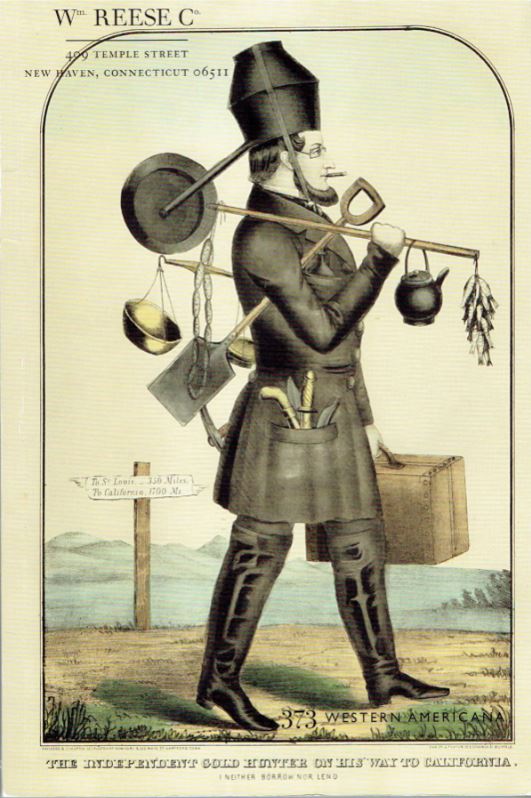 The William Reese Company has issued their Catalogue 373 of Western Americana. There is not a whole lot of cowboys and Indians, gunfighters and lawmen sort of things. Most items are true accounts of what people saw. Sure, a few things are a bit enhanced. Anything about Buffalo Bill is bound to be an exaggeration. Still, much of what you will find reveals accurate pictures, often manuscript writing by obscure people who experienced life in the Old West. Here are a few examples.

Of all the iconic landmarks in the American West, this must be the most spectacular of all. We begin with Tertiary History of the Grand Canon District... with Atlas to Accompany the Monograph on the Tertiary History of the Grand Canon District. The atlas was prepared by Clarence E. Dutton, while the illustrations in the Tertiary History were prepared by Thomas Moran and William Henry Holmes. The publication date was 1882. Reese describes the illustrators as “...arguably the two greatest American topographical artists to record this era of westward expansion.” It contains 42 plates, maps and charts, including a panorama across three sheets that if placed together would be 17” x 90”. This comes from a scientific expedition with Dutton being the scientist, but as he explained in the preface, “I have in many places departed from the severe ascetic style which has become conventional in scientific monographs.” The same can be said of the illustrations which better capture the canyon than even the photography of the day could. This is not the dry scientific publication we have come to expect today. Item 70. Priced at $12,500.

Dallas, Texas, doesn't sound like a place one would go to set up a community of Utopian socialists, but it was a different place in 1854. Primarily, there was hardly anyone there. Victor Considerant was a French national who came to Dallas County to scout out a site for his planned democratic socialist community. He purchased a large tract of land near today's downtown Dallas, and returned to France to gather a group of several hundred immigrants. He described his plan in 1854 in this book, Au Texas. He describes both Texas in detail and the plans for the community known as La Reunion. While Considerant was able to get together a following of people who wished to live in this Utopian commune, it ultimately proved unsuccessful. Unfortunately, while the settlers had many skills, they were not good farmers. A late blizzard in 1856 destroyed the crops, and the extreme, dry heat of summer made it even worse. And then there were the locusts. The settlers began to leave, some back to Europe, others to different locations in America. Eventually, the settlement disappeared, with few traces left today, but the name lives on in Dallas' Reunion Tower and Reunion Arena. Item 26. $7,000.

If you have wondered what the typical overland trail traveler heading for Gold Rush California looked like, you can rest assured it was nothing like the figure seen on this catalogue's cover. This is a lithograph circa 1850 from Kellogg and Comstock (it was also printed by Nathaniel Currier in his pre-Currier and Ives days). Based on the sign, he has walked 350 miles from St. Louis with 1,700 miles still to go to his destination. His neat outfit and carefully placed implements that he would need in California look nothing like someone out on a 2,000 mile journey by foot, especially since he is lacking in the supplies necessary to get to California. The caption reads The Independent Gold Hunter on the Way to California, and beneath it “I Neither Borrow Nor Lend.” Item 14. $4,750.

No one wants to spend time in prison, but this man spent 18 years in one of the most notorious prisons America has ever known. Item 49 is Ten Years in a Dungeon. Inferno of Infernos. By One Who Passed Eighteen Years of His Life in Prison. Alternatively, you can go with the cover title, The Horrors of Life in a Dungeon. Eighteen Years in a Missouri Penitentiary. The inmate author was Solitary Johnson, and you can guess where he got the name “Solitary.” He was also known as John B. “Firebug” Johnson and that nickname explains why he was in there for so long. Johnson arrived as a typical prisoner, convicted of robbery, but came to be known as the the meanest, most disruptive prisoner they ever knew. He was also unbreakable. He attempted many escapes and started three fires in prison. One of them caused half a million dollars in damages and killed several other inmates. As a result of his behavior, he ended up spending most of his years in the “dungeon,” the prison basement where he was held in solitary confinement. He endured beatings, hunger, thirst, darkness, silence, and cold. However, he writes that nothing “is so ravaging upon the constitution as perpetual solitary confinement.” Years were spent with no contact, not even with guards. It would have driven anyone insane, except for Johnson. On top of that, Johnson, who was illiterate when he entered, emerged from prison well-read and quoting Shakespeare. He learned to read and write alone in his cell. This rare work, circa 1900, appears to be a precursor of a book he wrote with Charles Hoffman published in 1903 entitled Buried Alive for 18 Years in the Missouri Penitentiary. $1,000.

Here is one of those exaggerations. Wild Bill Hickok was many things – gunfighter, stage driver, outlaw, lawman, army scout and gambler among them. He was a remarkable man, but like Buffalo Bill, not quite as remarkable as he or others portrayed him. Item 7 is Life and Marvelous Adventures of Wild Bill, the Scout. Being a True and Exact History of All the Sanguinary Combats and Hair-Breadth Escapes of the Most Famous Scout and Spy America Ever Produced. It was written by J. W. Buel, who claimed to know the wild man and have had access to his diary. Nonetheless, it is less than the “true and exact history” of Bill's exploits he claimed. Buel was a prolific writer and one imagines he knew a good story would sell books regardless of its accuracy. Still, it does tell us some things about Hickok if one can separate fact from fiction, and his book is the first biography of Wild Bill written. It is also quite rare. $3,500.