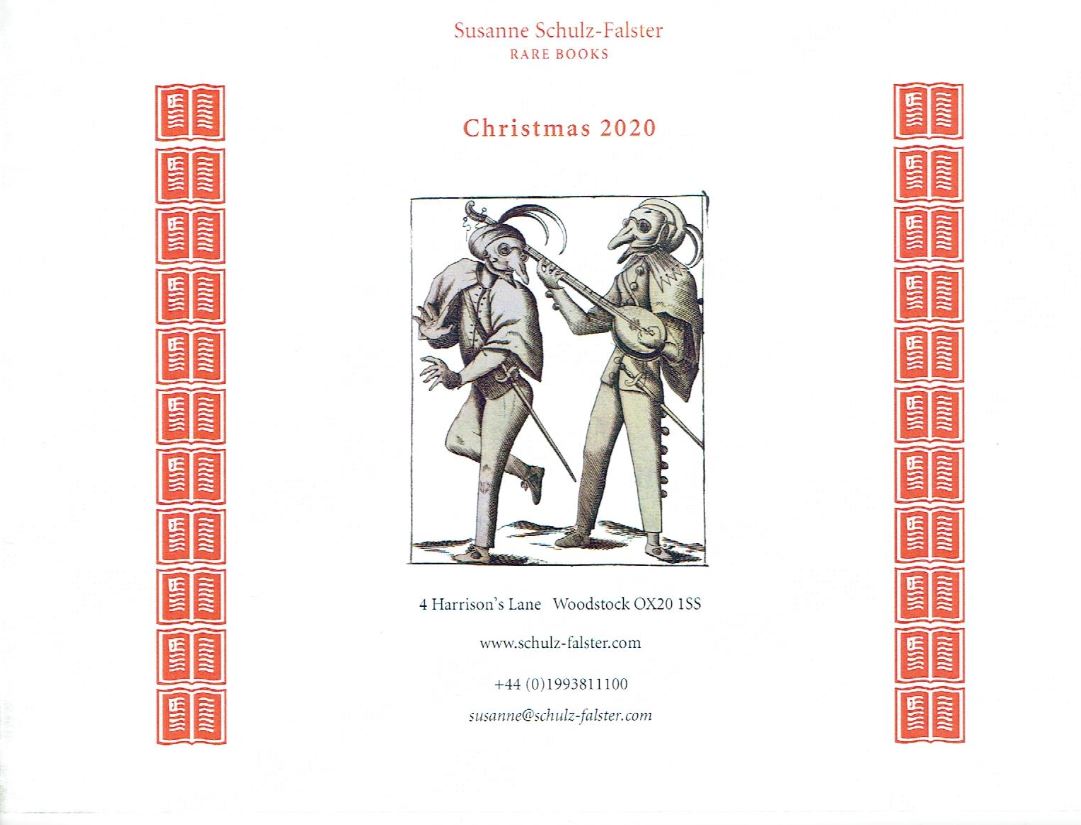 We are admittedly a bit late here, but Susanne Schulz-Falster Rare Books published a catalogue for Christmas 2020. It's okay to be late as this is not a particularly Christmassy catalogue. It is simply a collection of interesting books and other items that would be equally appropriate if we renamed the collection a more timely Valentine's Day 2021. There is a mix of material here that is hard to easily classify so we will just proceed to describing a few samples of what can be found.

We begin with a book in French by an Italian that's about America. The author is Filippo Mazzei, an Italian immigrant who settled in Virginia close to Thomas Jefferson. They became close friends, and Mazzei a supporter of America and its cause during the Revolution. He came to know many of America's founders. He has been credited by John F. Kennedy as coining the phrase, or something close to it, “all men are created equal,” which Jefferson inserted in the Declaration of Independence. Mazzei originally came to America to test numerous plantings, and he instructed Jefferson on growing grapes, but he also talked to him about liberty and freedom. During the Revolution, he returned to Europe, but this time, instead of coming back with plants and seeds, he brought back weapons. In 1788 he published his book about America, Recherches Historique at Politiques sur les Etats-Unis de l'Amerique Septentrionale... He looks at America's history, the reasons for its separation from England, its government, economy, slavery, immigration, Indians, and more. He opposed slavery and noted that while Americans thought of Indians as savages because they thought their culture superior, the Indians thought the same of theirs. Mazzei is a mostly forgotten person, but he was an American hero, a transplant similar to Lafayette. This four-volume set of Mazzei's book is a first edition, first issue, uncut and unopened. Priced at $1,200.

I don't know whether Filippo Mazzei ever attended this event, but he could have before coming to America. This is Il Carnevale Italiano Mascherato... (the Italian masked carnival) by Francesco Bertelli, published in 1642. This is about the Carnival of Venice, dating back to the 12th century, but forced to close down at the end of the 18th. It finally reopened 40 years ago and is once again a regular event. This very rare first edition features engravings of costumes and masquerades worn at the Venetian carnival. The masks allowed people of all classes to mingle as one's status was unknown behind a mask and costume. It also allowed for satire and criticism otherwise risky in public. Carnival takes place before Lent, making it somewhat akin to Mardi Gras in New Orleans. There are 25 plates depicting costumes and scenes regularly seen during the festival. $20,000.

Here is a book whose premises are probably needed more today than when it was printed in 1853, though standards have certainly changed. The title is True Politeness. A Handbook of Etiquette for Gentlemen, by an American Gentleman. One thinks a polite gentleman would have given his name. Advice is offered such as #1, “The inferior should always be introduced to the superior.” Who is the inferior? Any volunteers? It is unstated. When introduced to another, you should say “I am happy to make your acquaintance,” unless it is a “superior,” in which case you say “ I am happy to have the honor of your acquaintance.” A bad coat or hat is acceptable so long as worn by a “decayed gentleman.” This book is written from the perspective of a self-styled “gentleman,” with an obvious sense of superiority. This is a later edition of an often reprinted guide, the first probably going back to about 1847. $650.

Next we have Birmingham, Engraved from a Minute Trigonometrical Survey Made in the Years 1824 & 1825, published in 1828. To avoid any confusion among Americans, this is Birmingham England, not Alabama. It was created by surveyor J. Piggott Smith. One wonders what his first name must have been if he preferred being known by his middle name, “Piggott.” Schulz-Falster notes that this is “the earliest published plan on such a scale” of Birmingham. It is more than just a map, containing a business directory and their locations on the map. It names manufacturers, hotels, breweries, mills, churches, the synagogue, hospital and the Soho Ironworks. Canals feature prominently, this just preceding railways which began to appear in the 1830s. Landowners are named, except when they refused to cooperate and are listed as “refused access.” $3,300.

This is a satirical work, its target being the clergy. The title is Renversement de la Morale Chretienne par les Disordres du Monachisme. Enrichi de Figures, published anonymously in 1780. One can see why its creator wanted to remain anonymous. The church in 1780 was not that forgiving. The title translates to “Reversal of Christian Morality by the Disorders of Monasticism. Enriched with Figures.” It contains 50 unflattering depictions of priests and monks engaged in dubious behavior, such as gambling, drinking to excess, gluttony, and flirtation. The first 25 are explained in French and Dutch, the second series in just French. The second are even more viscious than the first, showing the clergy being cunning, seditious, superstitious, as idolators, and appropriating money. It is based on an earlier work of the same name attributed to Cornelis Dusart. $1,800.