The Uncommon and Unusual from Samuel Gedge, Ltd. 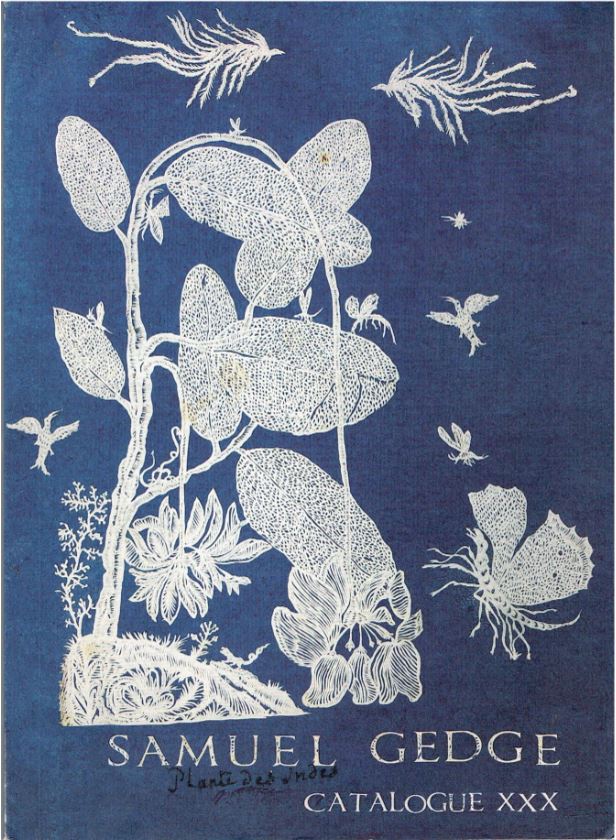 We begin with a manuscript journal of a visit to St. Helena Island, and Batavia and Bencollen in today's Indonesia. The traveler was John Parr Welsford, a merchant and trader who sailed on the East Indiaman Francis and spent parts of 1788 and 1789 in transit and visiting those locations. The journals were sent back home to Susan Adams, who would later become his wife. Among his fellow passengers was Sir Robert Brooke, heading for St. Helena to take up his post as Governor. Welsford served as purser on the ship. He described activities on the journey, literary discussions, helping seasick women passengers, discipline of drunken sailors, details of carrying live animals on board, a celebration on crossing the equator, Brooke's taking of two sharks and making a “luxurious meal. They first salt it then half boil it and lastly fry it when it is good to eat...” If you say so. The second journal contains 25 pages of descriptions of Batavia and Bencoolen, describing concerts performed by Malay slaves, murders committed under the influence of opium, fruits grown there, men living with Malay women, and two weeks of being ill. The journals provide a unique view of life on the seas and in Indonesia in the late 18th century. Item 61. Priced at £4,500 (British pounds or approximately $6,113 in U.S. dollars).

This is another manuscript account, a letter home from India with a bit of a backstory concerning its writer. Elizabeth van Straubenzee went to India with Col. Marwood Turner van Straubenzee, whom she married after arriving. He led a regiment and the British were engaged in fighting in India. The letter was sent on January 29, 1784, to her sons, John Peter and Thomas Hankey, in or approaching their early teens, back in England. She tells of life in India with humor. In describing travel, she says, “I am carried in a large tea tray with a cover over the top & full of pillows by ten men. They take it four at a time and relieve one another without stopping, they go about five miles an hour sometimes more & will carry you forty miles a day.” She later describes housing. “The greatest number of houses here have roofs like a barn & the rats, birds, bats & lizards are very friendly & inhabit the same room...” As for the backstory of why she was there, Elizabeth van Straubenzee, then Elizabeth Hankey, carried on an affair with Col. van Straubenzee whom she met while spending some time in the countryside apart from her husband for her health. The result was a sensational adultery trial 1783. John Hankey sued for divorce, which was granted, and Col. van Straubenzee was ordered to pay Hankey £10,000, which he could not afford. It was later reduced to a more affordable £500. Neither was permitted to remarry while the other was alive, but Turner and Elizabeth ignored that requirement once they got to India. The marriage did not last long as Elizabeth died in India the following year. Col. van Straubenzee returned to England in 1787, married twice more and lived until 1823. Item 67. £750 (US $1,018).

Next is a book that shows how much education has changed since the seventeenth century. It is a copy of the 1668 Amsterdam edition of Juvenile's Satyrs, written in ancient Rome around the year 100. The book is interleaved with blank pages for the student to write his translation or other notes. In this case, it is mostly a translation to English from the Latin. He has underlined certain sentences in the original text and provided his translations. From the handwriting and style of translation it can be dated to circa 1670. Today's schoolchildren would be horrified at the the thought of being assigned a task like this, but then again, this child would have been overwhelmed if required to operate a computer, so perhaps they are even. Item 32. £3,500 (US $4,750).

Here is an item you might like to hang on your wall, or maybe you wouldn't. It is a lithograph, drawn on stone by Mrs. Saumarez from a painting by Miss Brant, circa 1840. Neither of these artists are household names. Gedge was unable to identify either, but they evidently were part of a common activity at the time of works by amateur female artists. It also reflects popular Gothic themes of the era. The image is that of a bat with unusually long ears flying over a marshland. It isn't great art, but it is distinctive and guaranteed to be a conversation piece. Item 36. £650 (US $881).

This engraving is a bit more complex and accomplished than the previous one, although it too has its oddities. It depicts the Crucifixion, although it appears in the background. The artist was Lucas van Leyden, a celebrated Dutch artist and printmaker. It was originally produced in 1517, though this copy was made considerably later, late sixteenth century after 1566. While the Crucifixion is seen in the background, the foreground is peopled with various peasants, noblemen, soldiers and such. They appear engaged in conversation with little concern for what it taking place behind them. In a less than authentic oddity, the people are dressed in late fifteenth century Low Countries attire. Item 7. £3,250 (US $4,407).