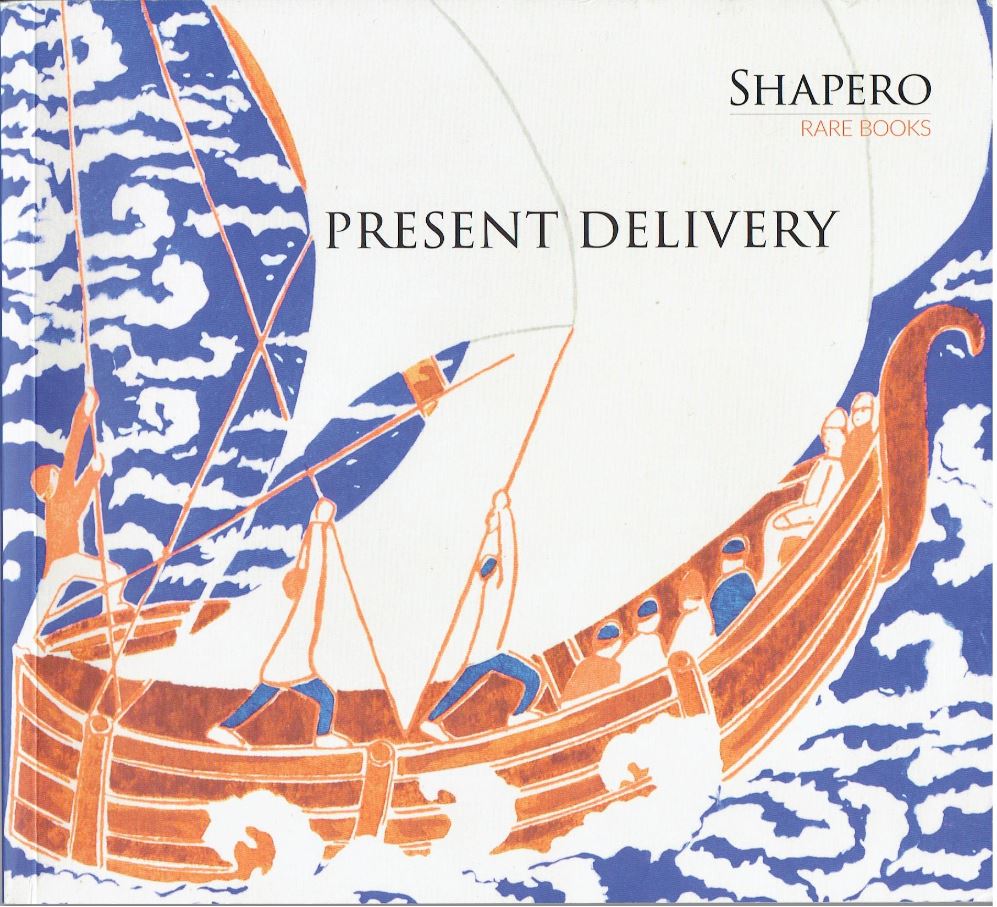 Shapero Rare Books recently issued a catalogue entitled Present Delivery. That is obviously a word-play referring to holiday giving, but hey, you can give presents anytime, including the present. And if you have already filled your friends' list with gifts, there is always yourself. Shapero has even provided an index to make it easy to find what you would like. Those categories are Fiction, Poetry & Prose, Children's & Illustrated, Visual & Performing Arts, Special Interest & Sport, Russian, and Modern Prints. Here are a few selections presently ready for delivery.

We begin with a book that is certainly a propos reading for today. A Practical Treatise of the Plague, and All Pestilential Infections that have happen'd in this Island for the last Century. That island would be England and the author of this book a physician, Joseph Browne. It may not provide the most useful information for dealing with the current plague since Dr. Browne was not that highly regarded even during his era of primitive medicine. His book was published in 1720. The Dictionary of National Biography says Browne “has generally been described as a charlatan,” and his writing led to the claim that he was “a mere tool of the booksellers.” His opposition to Harvey's theory of circulation of blood did not gather him much respect among his colleagues. Some of his theories, such as exploding canons to clear the air of whatever it was in there that might be bad, or that overweight people didn't sweat as much as others, which prevented them from cleansing the body of bad elements, seems quaint today. However, in fairness to Dr. Browne, it should be pointed out that this was 1720 and many believed in such “cures” as exploding gunpowder and other strange theories that seemed reasonable in his day. Item 124. Priced at £450 (British pounds or approximately $611 in U.S. dollars).

This is a literary classic and one of the more popular novels of the 19th century, Jane Eyre: An Autobiography. That was a lie. There was no Jane Eyre. It was supposedly edited by Currer Bell but that too was a lie, there being no Currer Bell either. Of course, we now know the author was Charlotte Bronte, one of the star-crossed Bronte sisters. When they first published their books, they gave themselves the last name “Bell” rather than Bronte to disguise their identities. Each took a gender-vague first name so that readers might assume they were men, women not believed by many readers to be competent to write books. Item 11 is a third edition, published in 1848, the year after the first. The book's popularity quickly led to second and third editions, but it was not until after this third edition was published that Bronte's true identity was revealed. This copy belonged to the renowned Bronte scholar Margaret Middleton Smith. £3,000 (US $4,087).

Next we have The Life of Edward Lord Herbert of Cherbury. Written by Himself, published in 1764. You might ask who is Edward Lord Herbert of Cherbury? He was reasonably well known during his lifetime, but he has had almost four centuries since to be forgotten. Besides which, it took over a century for anyone to bother publishing his autobiography. Lord Herbert was a diplomat, soldier, philosopher and writer. He achieved some notoriety when Sir John Eyre accused him of messing around with his wife and attempted to have him killed. Sir John was a very jealous man and his claim was dubious. Herbert got into some trouble during the English Civil War but quickly decided to keep out of the spat. This book may be more notable for it being a work of Horace Walpole's Strawberry Hill Press. Walpole, in a letter, said of this book, “The thing most in fashion is my edition of Lord Herbert's Life; people are mad after it, I believe because only two hundred copies were printed.” Absence makes the heart grow fonder. Item 57. £1,150 (US $1,572).

Item 72 consists of first edition, first issues* of the three Alice books. The first is Alice's Adventures in Wonderland published in 1865 though dated 1866. This one earns the asterisk. It was the first published edition though technically the second edition as the first was withdrawn with only 23 copies surviving. Next is Through the Looking Glass and What Alice Found There, published in 1871 though dated 1872. This was author Lewis Carroll's (pen name for Charles Lutwidge Dodgson) follow-up story. The first two were illustrated by John Tenniel. The third is the less well-known Alice's Adventures Underground published in 1886. This was the original title for the first book. What it is is a facsimile of the original manuscript of Dodgson's stories given to the young neighbor girl Alice Liddell, who so loved the stories he told that she asked him to write them down. It was the basis for Alice's Adventures in Wonderland but not identical, giving readers a chance to see how the story evolved. It contains Dodgson's own drawings. £25,000 (US $34,180).

Marilyn Monroe was known to generations for her beauty and undoubtedly received much recognition for what came to her without effort. However, among those awards you may not realize that she was Miss N.A.S. Miss N.A.S.? Yes, Marilyn Monroe was Miss Naval Air Station San Diego for 1952. I don't know who the other winners of this award were but my guess is Monroe is the most famous and beautiful of them all. Item 110 is a copy of the N.A.S. Annual dated January 1953. Miss Monroe graces the cover in a one-piece swimsuit replete with her Miss N.A.S. banner. It also includes stories by six writers, one of whom is Erle Stanley Gardner, best known as the creator of Perry Mason. Miss Monroe has signed the cover while most of the writers have also added their signatures. £9,500 (US $12,992).