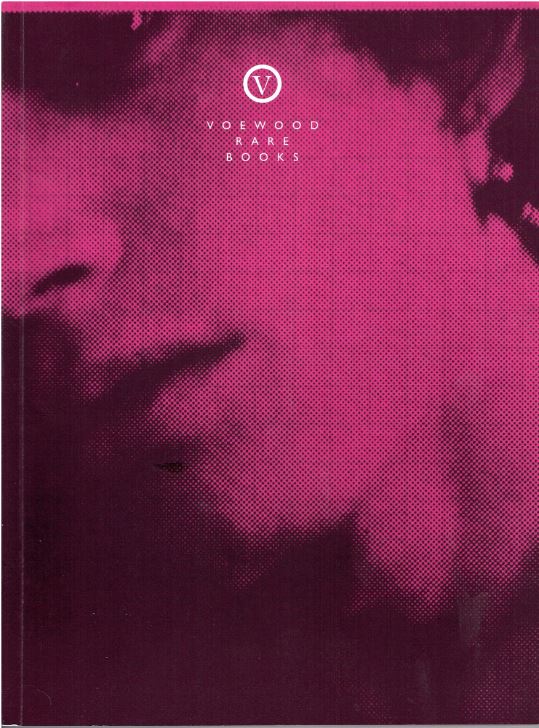 Voewood Rare Books has published their Catalogue Two. They don't issue a lot of catalogues, Catalogue One having come two years ago, but they are very special catalogues when they do arrive. This one contains 85 well-described and illustrated items that can reasonably be described as a variety. While technically only a couple years old, Voewood is the successor of the long-established Simon Finch Rare Books. Voewood Rare Books is located in an estate built early in the twentieth century in the English countryside, County Norfolk. It is a perfect setting for the finest of books. These are a few selections from this latest catalogue.

We begin with what sounds like it must be the most spectacular find ever, perhaps the greatest printed document known to man. It's heading is A Copy of a Letter written by Our Beloved Lord and Saviour Jesus Christ. It begins with a letter by Jesus concerning keeping the Sabbath and such. There is then a letter from King Agbarus of Edessa, an ancient city in what is now Turkey. The King writes that he has heard that Jesus cures illness without medicines or herbs, that he makes “the blind to see and the lame to walk.” Concluding that this means Jesus must either be God or the son of God, Agbarus requests that Jesus come to his city, where he will be safe, and heal him of his ills. Jesus responds that he is preoccupied with the mission on which he has been sent, but that after he has been taken up, he will send one of his disciples to heal the King. If so, it worked for a while as Agbarus survived Jesus by around twenty years. It is said that the letter was found under a stone by the foot of the Cross. The original appearance of the letter is quite old (though not as old as Jesus' time), having been discovered in the archives of Edessa by Eusebius in the third century. It had many believers during the Middle Ages, but you won't find many if any believers in its authenticity among scholars today. Its supposed history seems preposterous. Most likely it was created to support one side's view among the theological disputes of the third century. This English translation was printed around 1725. Item 34. Priced at £750 (British pounds or approximately $1,015 in U.S. dollars).

Jane Austen is known for her writing, but writing music? She came from a very musical family and played music, but perhaps by saying she wrote music we are being a bit misleading. That is literally true, but “copied” music might be a more accurate description. Item 1 consists of two volumes, approximately 550 pages, of handwritten music, including music notations and lyrics. They were compiled by members of the Austen family, including, along with Jane, her sisters-in-law Elizabeth and Eliza, nieces Fanny and Elizabeth, and three others unknown. Watermarks place the likely dates of the first volume from 1798-1804. The second is watermarked 1818 and these are all in the hand of Jane Austen's niece, Elizabeth Austen Knight. The volumes are in half morocco with gilt lettering that reads Songs, Duetts & Glees. Most songs are from known or popular composers of the day but a few were written by friends. Four of the songs in the first volume are in Jane's hand. They are, No Riches from his Scanty Store, by Johan George Graeff (lyrics by Helen Maria Williams), The Cheshire Tragedy by James Hook, Hail Lovely Rose sung by Miss Tyrer in the Farce of Catch him who can, also by Hook, and Before Jehovah's aweful throne by Martin Madan. If you are unfamiliar with these tunes, you can purchase this manuscript and play them yourself (if you can read music). Price on request.

Next we have another complex manuscript, five volumes in all, by a man as obscure as Austen is famous. However, he is also the author of his work. His name was Alfred Pratt and he lived during the late 19th century. The title of his work is Popular History of Freemasonry. Pratt was obviously a devoted Mason as he put a lot of effort into his history of English Freemasonry, going all the way back to its beginnings in India and Egypt. In the introductory prospectus he explains his purpose is to provide the general public with a book that will “lay hold of the whole of a doctrine, the influence that it has exercised upon civilisation, the progress it has realised and the destiny that it is promised in the future.” That was an ambitious task Pratt took on but there is no sign his work was ever published. Item 32. £3,750 (US $5,077).

This is the earliest written treatise on English law (though not the first printed one). The title is Tractatus de legibus et consuetudinibus regni Angliae, Tempore Regis Henrici Secundi... (treatise on the laws and customs of the Kingdom of England, during the time of Henry II), by Ranulf de Glanville. It was written no later than 1189 as that is when Henry died. Henry was a powerful king who expanded England's territory, but he could be brutal, was unpopular, and by the end, his reign devolved into family fighting to the point that he had been defeated in war by his own sons shortly before he died. However, he is remembered for reforming the nation's legal system and is credited with creating the common law. However, the legwork was done on his behalf by Glanville. His book is more a treatise on legal procedures than case law. It was so highly regarded that it remained in use for centuries. Unfortunately, Glanville was not as highly regarded by Richard I, Henry's successor, who kicked him out of office, imprisoned him until he paid ransom, after which Glanville joined the Crusades and died the following year. This is a first edition published in 1554 by Richard Tottel, the official legal publisher for many years. It is bound with the 1604 (later) edition of Christopher Saint Germain's Dialogus which looks at the issue of equity in law. Item 59. £4,750 (US $6,437).

Now we have some satire combined with bad taste. What could be better than that? The author was Claude Prosper Jolyot de Crébillon, also known as Crébillon fils to distinguish him from his father. The book title is The Skimmer: or the History of Tanzai and Neadarné, published in English in 1735 (after the French of 1734). It is the story of Tanzai, who wants to marry Neardarné, but the fairies of this mythical land will not permit it as Tanzai is only 18 years old and the requirement is to be 21. His guardian fairy comes to his aid, and then we'll let Voewood explain what happens: “There follows a series of adventures involving the replacement of Tanzai’s genitalia with a skimmer (the flat ladle with holes used to take the fat off simmering stock), broken teeth, sex with old hags, the restoration of sexual organs and the final licking of the skimmer by a high priest.” Crébillon went to prison for this, but not because it was in bad taste. It was a thinly disguised attack on the church and the Ancien Regime. Item 5. £850 (US $1,150).