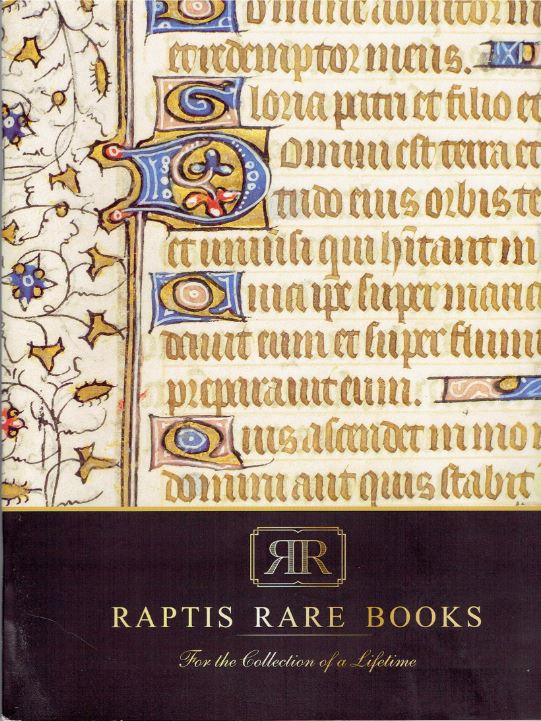 Raptis Rare Books has issued a new catalogue in its series “for the collection of a lifetime.” Rather than having a title, they provide of table of contents of what can be found inside. Here it is: History, Philosophy & Religion, American History, Literature, Heroes and Leaders, Travel, Adventure and Sport, Children's Literature, and Economics and Finance. These are a few of the items you will find in this latest selection of fine books.

We start with the most notable political debates in American history. They weren't even over a presidential race. It was for a senate seat from Illinois. The book is Political Debates Between Hon. Abraham Lincoln and Hon. Stephen A. Douglas, In The Celebrated Campaign of 1858, in Illinois. It was through these debates that America first learned about the gangly lawyer from Illinois who would come to lead America through its most trying time. It was during these debates that Lincoln proclaimed that the nation could not long endure as a house divided, half slave, half free. Lincoln may have won the debate, but lost the race. Ironically, the account of the debates was not published in 1858, but two years later in 1860. Lincoln and Douglas met in a rematch, this time the stakes much higher, for the presidency. The Republicans correctly believed that Lincoln's words in 1858 would resonate better with the public than did those of Douglas. They published it. Lincoln's less accommodating views about slavery were more popular than those of Douglas, whose views were too pro-slavery for the North, too anti-slavery for the South. This time Lincoln won, and in a landslide. Item 116741. $1,250.

Here is another book featuring the words of a man who would later become U. S. President. This time, they are written words rather than spoken ones. This is Profiles in Courage, published in 1956, by then Senator John F. Kennedy. In it, Sen. Kennedy recounts heroic acts of eight senators, heroic because, right or wrong, their positions were very much opposed to those of their constituents. They put their political lives on the line for principle. This copy comes with not one but two presidential signatures, neither of which is Kennedy's. They are George H. W. Bush and George W. Bush. The latter had spoken at a 50th anniversary remembrance of the terrible day in Dallas when Kennedy was assassinated. Item 112452. $3,800.

This next item is one of the few in this catalogue that is not a book. It is a portrait. However, the subject is a writer, more specifically, a poet. Robert Frost was noted for his poems about rural life in New England, lots of snow and paths in the woods. Most of us old enough to have been familiar with Frost during his lifetime remember him as an old man with a shock of white hair. We picture him speaking at President Kennedy's inaugural at the age of 86. In this portrait, he is a much younger man, perhaps in his 30s. The portrait has been signed both by the artist, Thomas Richard Hood, and Frost himself. Item 110684. $950.

Winston Churchill is not noted for writing fiction. Well, perhaps his political opponents thought he was, but Churchill did not feel that way. However, he did write one book that even he acknowledged was fiction, and that it wasn't particularly good fiction at that. He quickly returned to writing history. The title is Savrola: A Tale of the Revolution in Laurania. There was no such person as Savrola and no such place as Laurania. However, Laurania's supposed location is real – Europe. Savrola is the revolutionary who leads the revolt that overthrows the dictator. In the process, he wins the heart of the dictator's beautiful wife. Sadly, his comrades end up turning on him to save themselves. Some believe Churchill was writing about himself, but his political career had not yet begun when this book was published in 1900. He had big plans. Churchill was later quoted as saying he “consistently urged my friends to abstain from reading it.” This copy comes in a full morocco binding from Bayntun Riviere. Item 115248. $1,500.

Next we have a book entitled Mission to Mars, but it is not a work of science fiction. It is a proposal. Published in 1990, it is a blueprint for a 22-month mission to Mars to take off in June 2004. That did not happen, but the idea has come up again recently and maybe by the end of this decade it will happen? The author is Michael Collins and he is no crackpot or dreamer. He manned the Apollo 11 mission to the moon. He was the man who stayed with the craft while Neil Armstrong and Buzz Aldrin walked on the moon. They couldn't have done it without him (or they would have been left behind). He estimated the cost to be $200 billion but noted if spread over 15 years it would be less than we spend on cigarettes. Of course, today $200 billion is just pocket change to the government. This copy is inscribed by Collins “For Buzz and Lois with all good wishes.” Buzz, naturally, is his comrade Buzz Aldrin. Item 18036. $2,500.