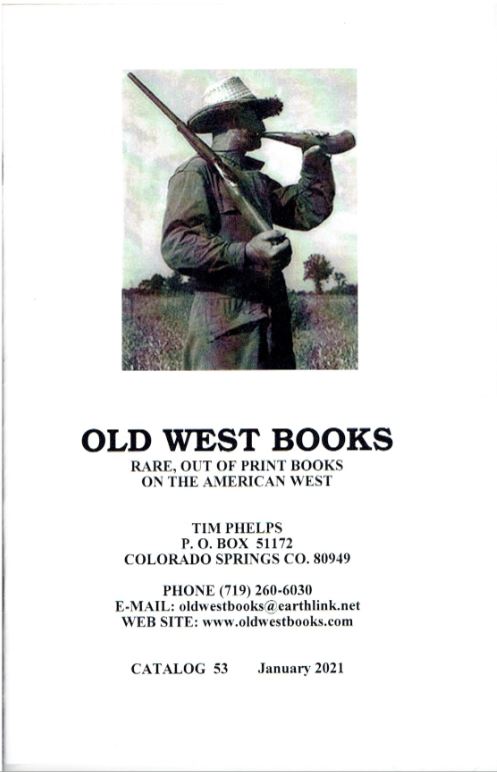 Books on the American West.

Old West Books recently published their Catalog 53, January 2021, of Rare, Out of Print Books on the American West. That description may be brief, but it still sums up the type of books you will find here. They are about the Old West, and most are accurate, or reasonably so, rather than fictional exaggerations of the place. Those who collect the real American West will find much of collecting interest here. These are a few selections.

We begin with one of those stories generally known as “Indian captivities,” but this is not the typical such book. The title is A Condensed History of the Apache and Comanche Indian Tribes for Amusement and General Knowledge Prepared from the General Conversations of Herman Lehmann, Willie Lehmann... by Jonathan H. Jones, published in 1899. Herman Lehmann was 11, Willie 8 when they were captured from their field by Apaches in 1870. Willie escaped a short time later, but Hermann did not. He was taken off to live with the Apaches, adopted by one of their families. He grew to be an Apache warrior, and was involved in their battles with the Texas Rangers and others. About six years later, Hermann killed a medicine man who killed his master, determining he had to flee for his life. He spent a long time living on his own before securing a welcome from the Comanche tribe. He became close to their legendary leader, Quannah Parker. With the Comanche forced on a reservation, he was taken to see his mother and family, whom he no longer recognized. For the rest of his life, he lived between the two civilizations, spending time in the white world and on the reservation. Many years later (1927), an older man in the last years of his life, Lehmann wrote an autobiography. Item 58. $3,950.

This is the second description of Texas by an American visitor, preceded only by Mary Austin Holley's account. This author arrived shortly before Stephen Austin's cousin, but she published first. The title is A Visit to Texas, Being the Journal of a Traveller Through Those Parts Most Interesting to American Settlers with Descriptions of Scenery, Habits, &c. &c., published in 1834. It has been attributed to M. Fiske though this is uncertain. Fiske (or whomever) purchased land sight unseen from the Galveston Bay and Texas Land Company. In fact, like many, he had never been anywhere near Texas let alone to his land. He came to see what he had purchased and check the security of his title. Fiske describes his travels around Texas, and likes it, but becomes ill and ends up returning east, well before the Texas Revolution. Item 36. $1,250.

Next is an obscure account of crossing the plains to California by a then young woman. Her name was Mrs. Lee Whipple-Haslam, her book Early Days in California Scenes and Events of the '50s as I Remember Them. That was the 1850s. Her father had gone west by boat in 1850 to find gold, established a claim, returned home and then took his family overland in 1852 to California. The trip, not surprisingly, was tough, but better than many. They saw many abandoned possessions, bones of dead cattle, abandoned wagons, even the bones of a young child, but by traveling slowly and taking time to feed their animals, they avoided major problems. The Indians they met were interested in trade, not attacking them. Unfortunately, a few years after they arrived in California, her father was murdered. Her mother opened a boarding house which leads to a notable event in her book. Mark Twain stayed at the boarding house for a while. She at first considered him “green,” but quickly realized he was far from that. “I was afraid of his quick repartee and sarcasm, even while I admired his versatility and conversational ability,” she says. She described their guest as a “visionary.” She says she advised him, “Why not write, as I know only you can? Grasp for fame, and strive to live in the memory and admiration of coming generations. Fame and gold will come at your bidding.” That seems almost too perfect, but perhaps her memory had become enhanced between the 1850s and 1922 when she wrote the book (published in 1925), but it does make a wonderful story. Item 74. $1,850.

This is an uncommon perspective on life in the Old West. We have some accounts by women, who provide a different perspective than do most books about the West, but this one comes from an upper-class British woman, and not just a visitor, but a settler. Isabel F. Randall was a 24-year-old woman in 1884 when she accompanied her husband to America to move to a ranch they purchased in Montana. He felt they could make a fortune raising horses. It wasn't so easy. Nothing was in the Old West. Her book is A Lady's Ranche Life in Montana, published in 1887. It consists of letters she wrote to family and friends in England from Montana. It was a difficult life, lots of work, limited rewards, and cultural differences with other women on ranches and farms in Montana who mainly came from very different, less affluent backgrounds. Nonetheless, she still manages to find humor in her situation as she describes her ranch life. They did not make the fortune they imagined, and two years later, returned to England where she gathered her letters and published this book. Item 52. $300.

Here is an account of another wealthy man who became a western rancher, among many other avocations, but he was nothing like Mrs. Randall. He thrived on the hardships, the harder the better. Overcoming challenges is what he lived for. Item 28 is Roosevelt in the Bunk House and Other Sketches: Visits of the Great Rough Rider to Wyoming in 1900 and 1910, by William Chapin Deming, the first edition published in 1926. Deming was a newspaperman, editor of the Wyoming State Tribune. Like most others, Deming was enamored by the man. His presence was spellbinding. Deming gathered his account from various people in Wyoming who had contacts with Theodore Roosevelt, but the most notable descriptions come from a meeting in a ranch bunk house in 1910. Roosevelt, recently returned from his famed African expedition, went to Wyoming. For an hour, he met with some newspapermen, ranchers, local politicians, and ranch hands and answered their questions. As Deming describes it, “we...asked him many questions that would help us to gain some understanding of this human dynamo, this composite man of the north and south, the east and west, whom all respect, and none quite comprehend.” Deming later adds, “He is a rare combination of unconventionality, candor, self-confidence, fearlessness, aggressiveness, and nervous physical energy...” Item 28. $750.