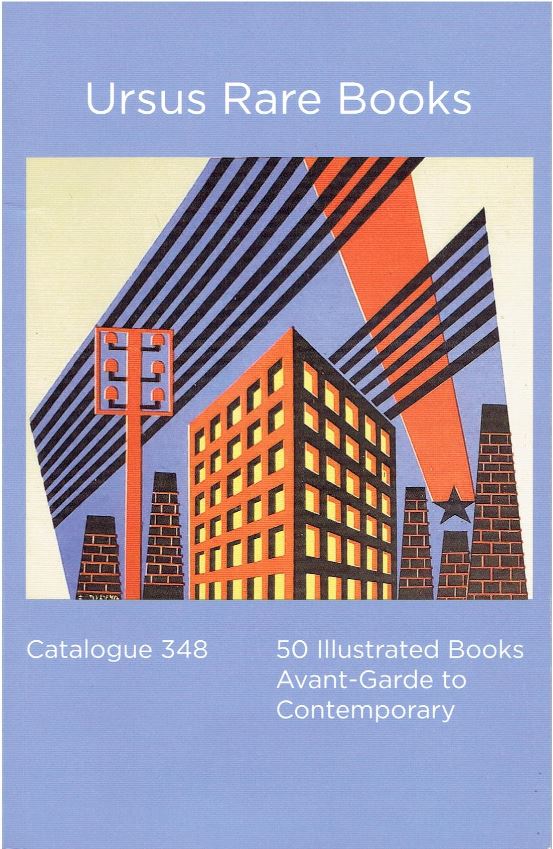 Ursus Rare Books has published their Catalogue 348. 50 Illustrated Books Avant-Garde to Contemporary. That is a concise title that still fully captures what is found within its pages. We might add that for most, it is more the illustration than the text that captures your attention, though some are combinations of original words and artwork. Also suggested by the title is that there is little that is traditional here. It is new, different, groundbreaking, reflective of the wild new directions art pursued in the twentieth century, leaving all the old rules behind. Here are a few samples.

We begin with a work that Ursus says “represents one of the most celebrated relationships in twentieth-century art.” It is that of Gertrude Stein and (not Alice B. Toklas, but) Juan Gris. They met in Paris, Stein being an American ex-pat, and Gris Spanish. It was the 1920s and Paris was filled with artists and writers from other lands as well as France. Gris had developed a reputation for his cubist art during the teens while Stein was a well-established writer and art collector at the center of the art and literary community in Paris. The title is A Book Concluding with As a Wife has a Cow. It was Stein's first work published in France. Gris provided four lithographs, the final one being the last one Gris ever made. It was published in 1926 and Gris died the following year at the age of 40. This is copy number one out of 90 from a total of 112. It is signed by both Stein and Gris. Ursus notes that it is in “mint condition.” Item 9. Priced at $9,750.

Next we have what Ursus calls “a virtually unknown work.” Published in 1938, the title is Dopolavoro Aziendali in Italia. It was created for the Third International Congress of Leisure Time and Recreation in Rome. The book is a massive overview of Italy at the time, its activities, places, industry. Along with many photomontages there are 96 color plates of images by Fortunato Depero. He came from the Futurist school, an Italian artistic and social movement that exalted modern technology, looking to jump start what it saw as decaying Italian culture. It started in 1909, but later on some of its members would become tied in with fascism. Depero's illustrations, each celebrating a different region of Italy, come with mottos by Mussolini. It is art but also propaganda. The image on the cover of the catalogue is one of Depero's illustrations and it reflects the cubism in much of his art. This copy has the stamp of Senatore Borletti, an industrialist who made a fortune during the First World War and became an ardent supporter of the Fascists. He didn't get to enjoy this book for long as he died the year after it was published. Item 28. $27,500.

This one comes with some descriptive quotes, such as "one of the most original and beautiful books of the century,” and “one of the most triumphant feats of book illustration in our century.” That century was the twentieth, and while it didn't take a century to complete, it did take 11 years. The title is A Toute Epreuve. Paul Eluard wanted it published in the form of an artist's book, and selected Joan Miro as the illustrator. That was in 1947, and it would not be published until 1958. Miro would create 233 woodblocks with Enric Tormo for the book. Eluard died during the middle of production, further complicating the project. It is now regarded as one of the finest examples of the surrealist book. This copy comes with two of the original woodblocks carved by Miro, one for a doubled-page spread (Ursus points out they are original Miro sculptural objects). One of 130 copies. Item 33. $95,000.

Sticking with surrealism a little longer, there likely is no artist more associated with it than Salvador Dali. That wasn't always the case, as he started doing realistic paintings and then switched to cubism before becoming drawn in to the movement in the late 1920s. This book revealed Dali's new direction that would last a lifetime, La Femme Visible, published in Paris in 1930 by Editions Surrealistes. It combines some of Dali's earlier writing with seven plates, some displaying human forms, jumbled together or body parts disassembled. There was no doubt he was in the surrealist camp. One of the plates is a photographic image of his wife, Gala, his inspiration and to whom the book was dedicated. She was the “femme visible.” This copy was inscribed by Dali to French cubist painter André Lhote. Item 16. $5,850.

I don't know whether this work qualifies as surrealist, but it certainly is strange. The title is Ein Anatomischer Totentanz (an anatomical Dance of Death) by Albert Hasselwander, published in 1926. Hasselwander was not an artist but a professor of anatomy who published a serious anatomical work using x-ray images the same year. It makes one understand this as a similarly serious work but intended more for artists. Still... It displays 25 nude photographs in somewhat erotic positions faced by skeletons in the same pose. It is indeed strange, perhaps disturbing. The Dance of Death was an artistic form from Medieval times presented to remind people that all of us, rich or poor, famous or unknown, end up in the same place (Hasselwander arrived there in 1950). Item 10. $8,500.