Law and the Western World from The Lawbook Exchange 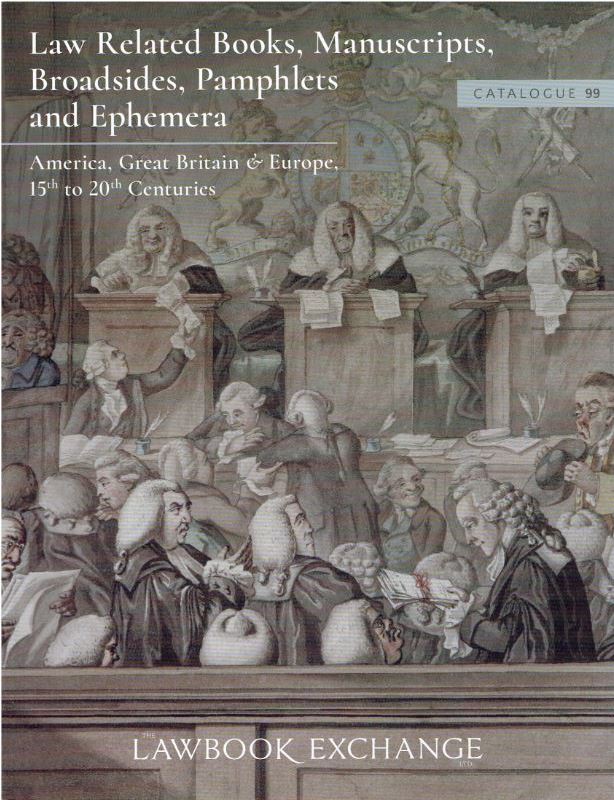 The 99th catalogue from The Lawbook Exchange.

The Lawbook Exchange has issued their Catalogue 99. Law Related Books, Manuscripts, Broadsides, Pamphlets and Ephemera: America, Great Britain & Europe, 15th to 20th Centuries. That doesn't leave out much concerning law in the Western World outside of 14th century and earlier and Australia (but there is an item related to a convict sent on a transportation to the land Down Under). More than most Lawbook Exchange catalogues, this one features more items geared toward the recipients of legal processes, its beneficiaries and victims, than to those who practice it. There are many accounts of trials and crimes, murders in particular. It is through publications such as this that the masses learned about the workings of the law in the days before TV crime dramas or Judge Judy and Judge Jerry. The public interest in sensational crimes was as great then as it is now. Here are a few selections.

Most of the murders described in these various works involved people who were known only for their roles in these sensational crimes, as murderer or victim. This one involved a victim of some renown: Canton’s Great Tragedy: The Murder of George D. Saxton, Together with a History of the Arrest and Trial of Annie E. George, Charged with the Murder, published in 1899. George Saxton was the only brother of Ida Saxton McKinley, the First Lady, wife of President William McKinley. The case was made more notorious by the hint of scandal. Saxton was involved for years with Annie George, a married woman. He financed Mrs. George's divorce, and settled a lawsuit with her husband for alienation of affection for cash. But ultimately, Saxton did not marry Mrs. George and the displeased woman shot and killed him as he went to visit another woman. She said it was self-defense. After a trial that ran through most of April 1899, George was acquitted. As for Saxton's sister, the First Lady, she was a troubled soul who endured enormous hardship in her life. Both of her children died young, her mother died shortly after the birth of the second, her brother was killed in 1898, and then her husband was assassinated in 1901. In addition, she suffered numerous illnesses, physical and psychological. It was a hard life. This book is attributed to “Coe,” pen name for Thurlow K. Albaugh. Item 12. Priced at $750.

Next we have a women's suffrage broadside, circa 1925, headed The Woman's Bible. Editor Elizabeth Cady Stanton. Carrie Chapman Catt, President of the national Suffrage Association, one of the Revising Committee. With a heading like that, you would think the writer was sympathetic to the women's movement. Not really. The Woman's Bible attacked sections of the Bible or their interpretations that appeared to support the subservience of women to men. The author here quotes sections of the Woman's Bible in an attempt to show that the suffragists are against the Bible and religion. The broadside concludes. “This is the teaching of national suffrage leaders. Are you willing for women who hold these views to become political powers in our country?” Item 3. $1,250.

This is another broadside, headed, Abstract of an Act of Parliament...for Amending and Making More Effectual, the Laws Relating to Rogues, Vagabonds, and Other Disorderly Persons and to Houses of Correction, from 1791. It is not entirely clear who these rogues and vagabonds are, though one imagines anyone whom authorities did not like would so qualify. It does say that poor people who did not use proper means to get employment or neglect their work or spend money in ale houses or other places of bad repute qualified as disorderly persons. Such people were either to be publicly whipped or sent to houses of correction, except female rogues and vagabonds were not to be whipped. Item 30. $750.

Here is a collection of constitutions which includes the first printing of the Declaration of Independence... in French. The title is Recueil des Loix Constitutives des Colonies Angloises, published just two years after the first English edition, in 1778. Along with the Declaration it contains the constitutions of Pennsylvania, New Jersey, Delaware, Maryland, Virginia, and South Carolina, the six states that had adopted constitutions at that time, and the Articles of Confederation. The work was dedicated to Benjamin Franklin. The purpose of the publication was to drum up support in France for the American Revolution. Item 74. $1,500.

Item 2 is a broadside Fee Bill of the Merrimack County Bar. These are fees lawyers were to charge for their services in Merrimack County, New Hampshire, as of October 4, 1864. We are confident they have been raised since then, but in 1864, a dollar was actually worth something. In this case, it could get a lawyer to write a collection letter for you. For debt collection, the attorney got 10% of the first $20, 5% for debts between $20-$100, up to just 1% of debts over $1,000. It cost $10 for a day's work out of the office, $15 to argue before a jury. If you think the Bar Association was setting these fees to prevent unscrupulous lawyers from overcharging, think again. The notice explains “The above charges to be the LEAST that shall be taken...” They could charge more, just not less. No price competition allowed. It further states that “any departure from this rule shall be followed by expulsion from the Bar.” The Bar did allow for an exception “in cases of poverty or other mitigating circumstances.” $650.