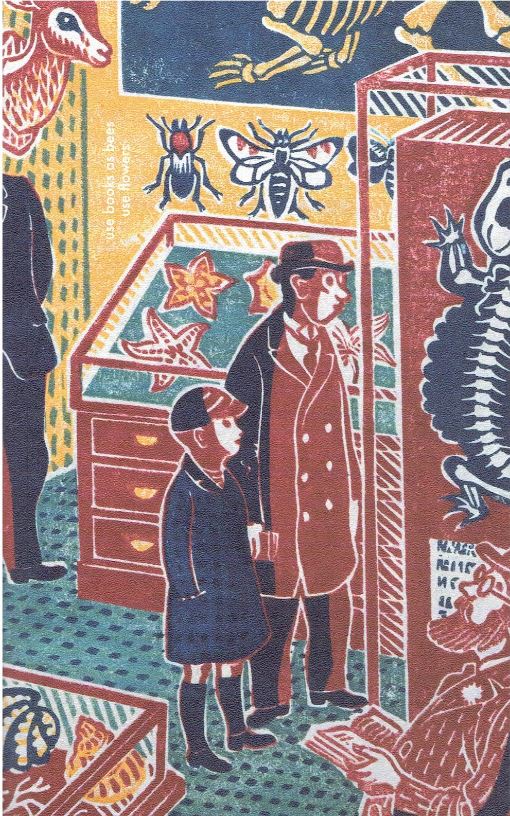 Honey & Wax Booksellers has issued a new catalogue without a title or number. We will identify it by the quote on the inside front cover from civil rights activist Pauli Murray, “One person plus one typewriter constitutes a movement.” You can tell that quote is at least several decades old. Each time I receive a Honey & Wax catalogue I struggle to describe it and invariably fail. It is too much of an eclectic mix of various types of material, from literature to art to anything else. Hopefully, a few samples will provide a little of the flavor of what can be found in this latest selection.

We start with an unusual French book from two centuries ago. The title is Les Spectacles Instructifs from 1817, by Mme B, née V (pseudonym) illustrated by Jean Démosthene Dugourc. The text may be in French but the illustrations are in a universal language. The idea was to encourage children to improve their skills through practice. The method seems a bit odd. The illustrations display trained animals performing various tasks. The premise is that if animals can be trained to perform “difficult exercises for which they were never born,” surely children can do them. Perhaps Miss B didn't have children. Among the illustrations, some of which seem a bit extreme, are a falcon released for a hunt, a dancing marmot, a rabbit who plays the drums, monkeys in military costumes with bayonets, and warlike canaries who execute a deserter with a miniature cannon. Item 52. Priced at $4,000.

Item 7 consists of 16 hand-drawn and painted designs for a much larger mural. They were created around 1940 by New York artist Ruth Van Cleve. They are happy scenes designed to appeal to children. They depict mixed race children at work and play, washing up, putting clothes on a clothesline, ice skating, skiing, playing ball, playing music, fishing and jumping rope. There are boys in cowboy costumes with a lassos and a guitar. Outside of some clowns in a circus parade, there are no adults. A drum in the parade bears the legend “PQ6 Band.” PQ6 was the children's psychiatric ward in New York's Bellevue Hospital, where the mural was painted (there are 12 black and white photos of the finished mural). The scenes are aspirational views of the outside world for the children inside. Belleview was noted as a pioneer in children's medicine, but in later years, its psychiatric ward came under scrutiny for experimental procedures, such as electroconvulsive therapy. $2,800.

If 16 sounds like a lot of illustrations, how about this one? Item 45 contains 106 poster-size sheets containing 6,892 color illustrations. These aren't large illustrations, but still, that is a lot of work. They were created by an unknown artist in Switzerland from 1940-1946. One imagines there were limited amounts of things one could do during World War II, even in Switzerland, so this certainly filled a lot of time. Most of the images have captions, but they are in an unknown, probably imaginary language. They are drawn in pastel, pencil, watercolors and crayon. Sheets contain 42-81 images each. While resembling a storyboard or comic strip presentation, they don't seem to follow any theme. There are landscapes, portraits, still lifes, domestic scenes, etc. You can see many of these images and speculation as to their source on this website: www.instagram.com/europaredux. $38,000.

Next is a postcard announcement of a talk for which you are a bit late since it was held in 1959. The place was New York, but the speaker was from Paris, though she was originally from America. The title of the talk was The American and French of the Twenties Meet in the Rue de L'Odéon. The speaker was Sylvia Beach, proprietor of one of the most famous bookshops in history, though it didn't have a long life - Shakespeare and Company. During the 1920s, her shop and that of her partner across the street on the Rue de L'Odéon were the meeting place of many of the great writers of the time. Not only were there French authors, but aspiring American ex-pats, most notably, Ernest Hemingway. Eliot, Fitzgerald, Valery, Joyce and Stein were a few of those who frequented her shop. Beach and Shakespeare & Co. are particularly famous for having the courage to first publish James Joyce's Ulysses. No publisher in the English speaking world was willing to risk putting their name on the controversial work. The book shop was forced to shut down after Germany occupied France during World War II and did not reopen after the war. Beach published an account of the firm's history in 1959 and it appears this talk was part of its promotion. This postcard was sent to Fred W. McDarrah, a photographer for the Village Voice. Item 1. $550.

Item 44 is a complete run of the Charles Boni Paper Books and Bonibooks collection. They were published by the Boni Brothers, Charles and Albert, from 1929-1931. They were publishers before and after this relatively short run. They came up with the idea of publishing classic books as paperbacks, making them very affordable, and then sell them in a book-of-the-month club style. For $5, you would get a classic book every month for a year. Of course, the timing of the venture, if you note the beginning year, was less than ideal. It's hard to sell books to people who can't afford food, and of those who were still working, not all were interested in “classics” they didn't know. In 1930, they changed the name from Boni Paper Books to Bonibooks and sold them in bookstores instead. The price was 50 cents each. They also offered hardback versions, with cover designs from Rockwell Kent and others, for $1. A total of 53 books were printed before they abandoned the project. Offered, along with all 53 titles, is the publisher's wooden display shelf, with “50¢ BONIBOOKS” lettered on top. Also provided is A Checklist of the Bonibooks and and Boni Paper Books published in 1994. $4,200.

Item 3 is a watercolor painting by Robert Andrew Parker depicting the house at 99 Ryerson Street in Brooklyn in 1855. From May 1855-May 1856, Walt Whitman lived in the house, and it was there that he wrote Leaves of Grass. The painting is undated, though it would be at least a hundred years later than the scene depicted. Honey & Wax notes that Ralph Waldo Emerson came to this house to congratulate Whitman on his work and that it is the only Whitman residence in New York City that is still standing. A note on the back says the painting was commissioned by the New Yorker though it does not appear to have been printed in that magazine. Item 3. $850.