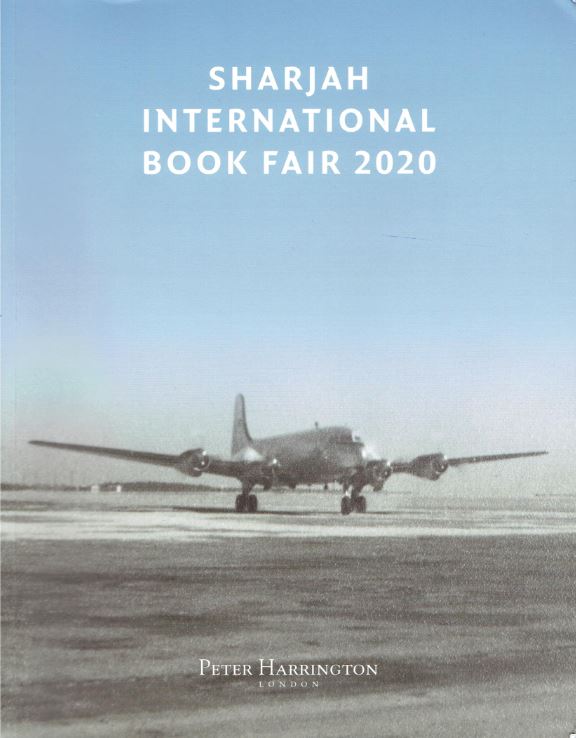 Books for the Sharjah Fair.

Peter Harrington issued a catalogue for the recent Sharjah International Book Fair. The Sharjah fair was unusual in that it took place in Sharjah, a real place, rather than in the virtual world somewhere in the ether. Sharjah is located in the United Arab Emirates, and it should be no surprise that there are people collecting at the highest level around the Persian Gulf. What we find from this catalogue is they collect both material of local origin and interest, and from the western world. The catalogue is divided into two sections appealing to those two interests: Part 1: The Arabic & Islamic World, and Part 2: The Western Canon. What is offered is all higher end items, some appropriate for serious though normal collectors, a few requiring you own a few oil wells. Whichever end of serious collecting you are on, or where you live, you will find many interesting items in this collection. These are a few samples.

Who would be better equipped to provide a guidebook to Arabia than T. E. Lawrence? He wasn't known as Lawrence of Arabia for nothing. Lawrence was a British archaeologist in Arabia when a revolt began in 1916 by the Arabians to overthrow the Ottoman Empire. The Ottomans were already preoccupied with fighting in World War I. The British commandeered him to act as a spy, and eventually, to assist the locals in their rebellion as that would draw Ottoman resources away from supporting their enemies in the Great War. Lawrence would prove to be most adept in his role of planning attacks, sufficiently so to become the subject of a successful movie in the 1960s. In 1917, he was instrumental in preparing a second edition of the Handbook of Hejaz, an update of a book published a year earlier by D. G. Hogarth. The Hejaz is a region in what is today Saudi Arabia. This book covers geography, routes, tribal and political organizations in the area, important information for those seeking to overthrow Ottoman rule. It would not have been printed in many copies and is quite rare today. Item 20. Priced at £32,500 (British pounds, or approximately $43,455 U. S. dollars).

Here is another guide, except this one is a map and it covers the whole of the Ottoman Empire. Based on annotations, it was used at the same time as Lawrence's guide, during the First World War, though it was printed two decades earlier in 1893. It was also used by the other side, it having been created for the Ottoman Empire in Istanbul. Item 27 is The Route to Mecca, Ottoman Empire Distance-Time-Route Map. The main map covers most of the empire, from Bosnia and Crimea in the north to Egypt in the south. Insets cover the Gulf region, including the aforementioned Hejaz, while another reaches the southwestern extremity of the empire in northern Africa, Ottoman Libya. This map not only shows routes and distances between all major points in the empire, but also is a rare map in that it provides travel time estimates. Among the roads displayed were some of the major hajj routes. £3,500 (US $4,679).

Next is an account of a remarkable journey: Ludouici Patritii Romani Nouum itinerarium Aethiopiae, Aegipti, utriusque Arabiae, Persidis, Siriae, ac Indiae, intra et extra Gangem. This is the first Latin edition of 1511 (a year after the first edition, in Italian) by Ludovico di Varthema. Described as “one of the most remarkable travel books of the Renaissance,” I can only say that this is an understatement. Varthema was an Italian who left his home in 1502 for an amazing adventure. He traveled around the Near East, eventually joining up with mamluk guards as a Muslim (though he was actually Christian). That enabled him to travel to the holy Muslim city of Mecca, from which non-Muslims are prohibited entrance. As such, he was likely the first westerner to visit Mecca. He then managed to escape, and through many daring and dangerous travels, made his way through Persia, India, and beyond, finally returning home in 1508. While there is little outside confirmation of his account, his descriptions of places such as Mecca proved to be accurate by later travelers, confirming the authenticity of his story. Item 39. £150,000 (US $200,466).

A geography book that was still being used almost 15 centuries after it was written must have been a very good one. Considering how limited the information concerning world geography was in the second century, Ptolemy, a native of Alexandria, was remarkably accurate. His work was long lost to the Western world, but was regularly consulted in the Islamic one until around 1400 when rediscovered in the West. With the advent of printing, his Cosmographia became the primary tool for understanding the world. Ptolemy provided tools for map-making and latitudes and longitudes as best he could determine for various locations. He breaks the world into the three continents he knew, Europe, Africa and Asia, while fully understanding that he was only familiar with a small part of what existed. Item 28 is the first printed edition of Cosmographia, published in Vicenza in 1475. This first edition did not contain any maps. Those began to be added starting with the 1477 edition which used Ptolemy's guides to create his maps. £450,000 (US $602,322).

The high values on some of these books is not surprising considering their place in history, but this one may come as a surprise. There is probably no other comparably recent book that has seen its value skyrocket so much in recent years as this one. It's magic. Item 73 is Harry Potter and the Philosopher's Stone, by J. K. Rowling, published in 1997. It has already reached six figures. This is a first edition, first printing, the preferred case-bound issue. Only 500 copies of the first printing were made and 300 were sent to libraries where little fingers made copies barely collectible. This one is in near-fine condition. Item 73. £110,000 (US $147,253).