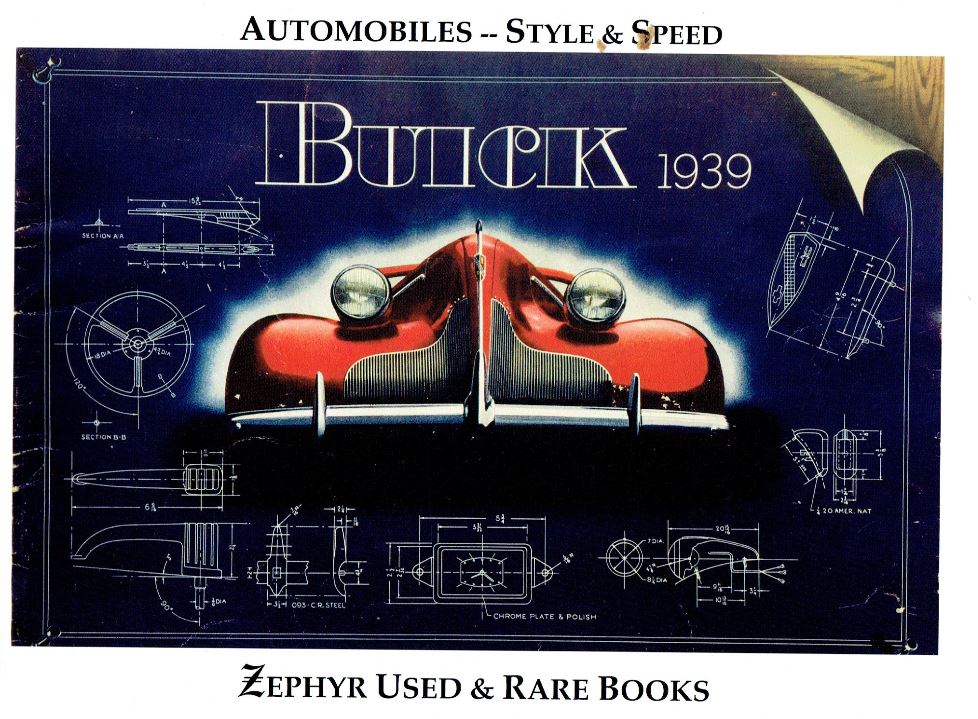 If you love old cars this is the catalogue for you. It has everything except the cars themselves. The title is Automobiles – Styles & Speed, from Zephyr Used & Rare Books. It is filled with promotional and dealership material, along with some lots of photos and other items. Dates range from the first decade of the twentieth century to the 1970s. Nameplates go from those still in existence to some you probably never heard of before. It is almost a history of the automobile, with new features being added and styling changing as the years go by. From cars that still looked like carriages that were drawn by a horse to sleek race cars, they are all here. These are a few.

Have you ever heard of the Dort? If not, it's probably because there are so few of them around, but they once sold 20,000 cars in a year and it was the 13th largest carmaker in the United States (back when there were more than 13). It also had a fascinating background. It emerged from the Durant-Dort Carriage Company, which began business in 1886 making horse-drawn carriages. The partners were J. Dallas Dort and the legendary William C. Durant, co-founder of General Motors. Starting with Buick, General Motors gobbled up several other car companies, including Cadillac and Oldsmobile and 11 others. Durant was in and out of its leadership, out when the company became overextended during his buying spree. In 1915, Durant left Durant-Dort, which re-formed the following year as Dort Motors. While the cars were popular, an economic downturn in 1920 resulted in financial problems for the company and Dort Motors ceased business in 1924. Item 45 is a folding dealer's brochure for Dort Touring Car Model 15. It comes from 1920. Despite the tens of thousands of cars the company produced during its run, only 30 are known to survive. Priced at $100.

Remember when Buicks were cool? Neither do I, but then again I wasn't around in '39. That Buick on the catalogue's cover looks pretty cool, but maybe that's just the angle of the photograph. It comes from a dealer's showroom brochure for the Buick 1939. They featured turn signal lights. No longer did you have to stick your arm out the window in winter. And, they had push button radios, a reasonable substitute while we awaited Spotify and bluetooth connections. Maybe Buicks were stodgy even in 1939, but you will look cool driving around in a '39 model today. Item 9. $150.

Next is a photo album containing 33 photographs of promotional and leisure activities at United Motors Co., a combination of three auto dealerships in the Pacific Northwest. The year was 1918 and the firm was selling over $1 million in cars and trucks annually, a lot of money at the time. There are pictures of the dealerships and the cars they were selling and a company picnic. I don't know what ever happened to United Motors but it is obviously long gone. Brands they carried included Stearns, REO, Elgin, Indiana Truck, Cole, Westcott, Stewart Trucks, Marmon, and the aforementioned Dort. No wonder they went out of business with a lineup like that. Outside of REO, which made trucks into the 1970s but stopped making cars in the 1930s, United wouldn't have had any cars to sell in almost a hundred years. Item 134. $1,450.

If you're looking for a car from a rarer model year, 1942 is a good choice. All production was shut down in February 1942 as car manufacturers were required to convert to producing items needed for the war. They were not allowed to produce cars again until late 1945, those being 1946 models. Still, a decent number of 1942 cars were made since those began to be produced in the summer of 1941. Item 107 is a booklet for Plymouth's Finest, the 1942 models, the pamphlet published in August 1941. Zephyr notes that the '42s had a more massive look than the previous model, but for the most part little changed. Automobile manufacturers were aware early that they would not be producing cars for long and there was no need to invest heavily in retooling. Neither was there that much change in the 1946 models, except for Studebaker, with their ahead of their time styling after the war. For others, it took a couple years for the designers to get back on track. Only 152,427 of the '42 Plymouths were produced before they filled their quota and production was ceased on January 31. $150.

Here is an odd one. It's a 1953 reel-to-reel 35mm movie, with sound and in color, for Studebaker. A DVD made from the movie is also provided with it in case your reel-to-reel projector isn't working. This 35-minute film was released in conjunction with the firm's 100th anniversary (and of course they were making covered wagons not automobiles in 1853), along with their recent acquisition of Packard Motor Car Co. This was a time when struggling car companies were combining to survive, usually to little avail. This film, entitled The Studebaker Story, recounts the company's history, from covered wagons for the Oregon Trail and California Gold Rush, the 1874 fire which destroyed much of their South Bend plant, to the conversion to producing automobiles. The South Bend plant and most production came to a halt in 1963, though models on a more limited scale were produced in Hamilton, Ontario, until 1966 when Studebaker made its last car. Item 57282 (I don't understand that out-of-sequence item number). $650.

Here is another merger of brands and its product, one more successful than Studebaker-Packard, but ultimately had its own shelf-life. In 1954, Nash and Hudson combined to form American Motors Corp. It reduced costs as Nashes and Hudsons came to be virtually the same car. Still, sales declined for both. However, Nash's compact car, the Rambler, was a success. It enabled the company to survive on its own, until taken over by Chrysler in the 1980s. Item 2 is a folded piece for the 1957 Rambler, which could be unfolded into a poster displaying all of its models. There was a V-6 with 135 HP and a V-8 with 190 HP. It was compact in size, and therefore more than competitive in price. With the Rambler's success and declining sales of the legacy brands, AMC discontinued both the Nash and Hudson after the 1957 model year to focus on the growing sales of the Rambler. $75.