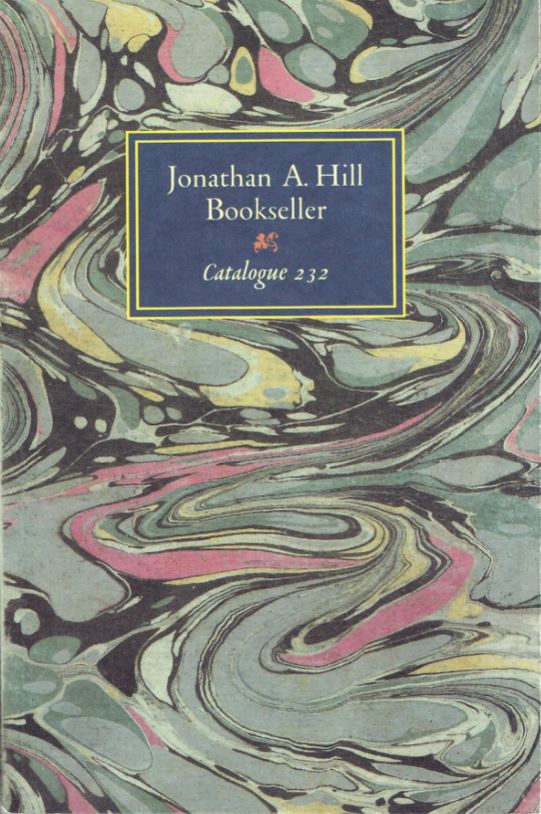 Catalogue 232 from Jonathan A. Hill Bookseller.

Jonathan A. Hill Bookseller has issued their Catalogue 232 – Science, Medicine, Natural History, Bibliography, Bindings, A Book Printed on Vellum, & a Manuscript by George Sand. Most of the books are quite old, pre-20th century, some going back to the 16th. Along with those categories, Hill has a usual selection of antiquarian auction catalogues, from the 18th or early 19th century. Here are a few particular items.

We start with a classic geological book, although the author is not that well known. His name was Jean de Charpentier, his book Essais sur Glaciers at sur le Terrain Eratique du Bassin du Rhone, published in 1841. After a tragic flood when the breaking of a glacial dam in Switzerland allowed a torrent of water to flow out, Charpentier began studying glaciers. He noticed that in the Rhone Valley, large granite boulders were scattered in the plain, the same type as high in the Alps. He concluded that the explanation was that they must have been moved by glaciers, which in turn must have been the result of colder temperatures, an ice age. He delivered a paper on this theory in 1834, but few believed him. The prevailing theory was that the earth was steadily if slowly cooling down from the days of its molten formation. Charpentier invited others to come see his discoveries, and one of his takers was the better known American scientist Louis Agassiz. Agassiz was a believer, developed the theory further, and published a book explaining the theory a few months before Charpentier published his. It is Agassiz who now is generally given credit for developing the theory of glacial movement and ice ages, though it originally came from Charpentier. Item 32. Priced at $1,650.

Next is a pioneering work in the use of inhaled gasses for medicinal uses. It precedes the revolutionary discovery of ether for relieving pain during surgery by half a century. The co-author was Thomas Beddoes, a Bristol physician, who studied the use of inhaled gasses in treating diseases, tuberculosis in particular. The book's title is Considerations on the Medicinal Use, and on the Production of Factitious Airs. For the unfamiliar, “factitious” refers to artificially created. This is a five part book bound as one, parts 1-2 the third edition, parts 3-5 the first (1795-96). Part 1, by Beddoes, covers his experiments, Part 2, by co-author James Watt, discusses preparation of the gasses, while Parts 3-5 offer accounts of treatment by other well-known figures. Beddoes founded the Pneumatic Institution in Bristol to study and determine how to produce the gasses. It was there in 1799 that pure nitrous oxide was produced, which provides pain relief, though it is now most commonly associated with dentistry. Item 21. $5,000.

Item 67 is a a portfolio of photographs from the steel works of Friedrich Krupp, in Essen, Germany. While the Krupp company bears the name of Friedrich, it was a struggling business during his management early in the 19th century. It would be his son, Alfred, who turned it into the largest manufacturer in Europe. Krupp's specialty was weapons, always in high demand, particularly in Europe where countries were constantly fighting each other. Krupp sold their wares to numerous nations and armies. Alfred Krupp was not just a master of weapons development, but also a master marketer. He had Hugo van Werden, a distant relative, trained in photography. This portfolio was prepared for various heads of state and military leaders, potential customers of their weapons. This copy belonged to their most important client, German Chancellor Otto von Bismarck. It contains 53 photographs, with the presentation slip to Bismarck from Krupp laid in. $9,500.

This is a work that will appeal to those interested in the history of firefighting. The title is Beschryving der nieuwlyks uitgevonden en geoctrojeerde Slang-Brand-Spuiten, en Haare wyze van Brand-Blussen, which roughly translates from the Dutch to the description of newly invented and patented fire extinguishing equipment. The author was Jan van der Heyden, who is best known as a painter. However, he was also an Amsterdam official and an inventor who focused on firefighting equipment. He developed a suction pump that could be used to draw water from a reservoir to a fire. He, along with his brother, also developed a sturdy, flexible fire hose. The brothers were put in charge of firefighting equipment for the city of Amsterdam. This is an expanded second edition from 1735. Plates are used to depict the van der Heyden equipment. Item 58. $6,500.

John Michell was an 18th century scientist, not well-remembered today which is odd because he was well ahead of his time. He made numerous discoveries in astronomy, geology, magnetism, and, in this case, seismology. The title is LV. Conjectures concerning the Cause, and Observations upon the Phaenomena of Earthquakes; particularly of that great Earthquake of the First of November, 1755, which proved so fatal to the City of Lisbon... The Lisbon earthquake was one of the most devastating ever, with the ensuing tsunami and fires adding to the almost complete destruction of the city. An estimated 30,000-50,000 people died. It brought about investigations as to the cause of earthquakes, with Michell devising the best explanation. He noticed the proximity of earthquakes to volcanoes, both resulting from activity deep in the earth's crust. He also came up with the theory of seismic waves generated within the crust, extending outward, but weakening as they did, like ripples in a pond. Many consider Michell the “father of seismology” as a result of his efforts. Item 77. $2,000.