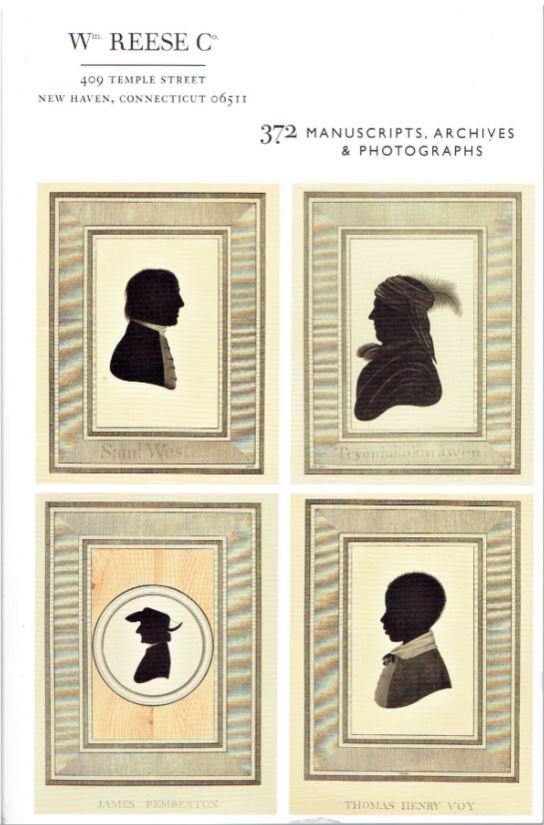 The William Reese Company has published a new catalogue of Manuscripts, Archives & Photographs. While not a limitation, a perusal of the catalogue reveals that most of what you will find pertains to America and comes from the 18th and 19th centuries. The material is historical, either from a notable figure or from people who experienced historical events. The letters, documents, photographs and such were rarely meant for public viewing, but, all these years later, here they are. These are a few of them.

We begin with an archive of letters home that display the reality of the Civil War. It wasn't heroic or romantic. It was about a lot of people dying or being injured to bring the nation back to where it started, except that slavery was no more. They should have found a better way to bring about that necessary change. The letters were written by two of the three Alldredge brothers of Alabama, who, naturally enough, fought for the Confederacy. Those brothers were William Valient Alldredge and Andrew Perry Alldredge. Not to start with the ending, but Andrew Perry, and a third brother, Warren Alldredge, never made it home. Andrew was captured in Oxford, Mississippi, and died in a prison in Illinois. Warren died in action in Atlanta in August 1864. At one point, obviously trying to reassure those back home, but in hindsight with tragic irony, Andrew writes, “God has been so merciful as to spare me through sickness, travails, & battle he surely will spare me to go home once more.” In 1862, William writes that soldiers are hopeful of peace because they have heard that France and England are about to recognize the Confederacy. It didn't happen. Evidently, soldiers were not always held in high esteem, not even by Southerners, as William wrote to his sisters, “the girls in Louisiana are the prettyest and most kind hearted girls you ever saw they treat a soldier like a white man...” In August, 1864, William has the terrible task of notifying the family, “It is with the greatest imaginable grief that I inform you of the death my last and dear brother your devoted Son.” In an attempt to be comforting, he continues, “What a glorious thing it is to be prepared to die he had been making preparations long before he was wounded and when he died there was not a frown on his face and he died perfectly easy just like going to sleep with his hands across his breast he breathed his last and his wearied soul took its flight to that happy land where wars and pestilence are not known...” Item 2. Priced at $12,500.

Next we turn to colonial times and New England's most famous Puritan clergyman, Cotton Mather. Few people would think of him as a fun-loving man. Puritans are thought of as, well...puritans for a reason. Here, on April 29, 1719, he wrote to a fellow clergyman his thoughts about Reverend James McSparren. McSparren, a recent immigrant from Ireland, had been installed as the minister of a church in Bristol, Massachusetts (later Rhode Island). Writing about a report from a Mr. Boyd, Mather says, “He constantly said unto us, that he had no personal knowledge of this McSparrin [sic]; But that it was Reported and Believed in Ireland that his coming...was to avoid a propension for a Fornication; And that, if his Testimonials as coming from any Presbytery shore, they are doubtless a Forgery...” He may not have been perfect, but I don't see any sign that Rev. McSparren had a propension for persecuting “witches.” Item 47. $12,500.

Bret Harte held many jobs during his life, mostly related to journalism and writing, though others such as a messenger for Wells Fargo. However, the focus of his writing was a period of about six years, from 1854-1860, much spent in the gold fields of California. He worked as a miner or as a supplier to miners. The experiences provided the background for his stories about the Gold Rush miners. He eventually moved back to New York, from whence he came, and then to Europe, where he spent the last couple decades of his life. Item 33 is a narrative of his experiences as a Gold Rush miner, though written several decades later in England (1897). It is a manuscript titled My Experiences as a Gold Digger, along with a typescript of the story now headed How I Went to the Mines. This piece was published in 1899, but only after revisions and shortening. In a section deleted from the published version, Harte lets his readers know how unromantic life was for most miners, writing “Let any of my youthful readers, unused to manual labor, imagine himself condemned for days, weeks and perhaps even years, to the regular task of digging, shovelling and carrying earth in a wheelbarrow to a dirty stream to be as regularly washed; let him further imagine that his only reward for this toil was just sufficient to procure him the plainest food and he will have some idea of gold digging as practised by at least two-thirds of the mining population of California – even in what was known as its 'flush times.'” $25,000.

Item 28 is a collection of six letters from a young American woman written between 1905-1908 who traveled where few Americans of any gender went in those days – Siberia. Her father purchased some mines there and she went with him, staying several years. Her name was Marian Fell and she was only 19 when she went. The copper mines were in an area now part of Kyrgyzstan, but was part of the Russian Empire, and later the Soviet Union, until that nation disintegrated in 1991. She writes about the homes and customs of the Kirghiz people, her opinions favorable. She writes about threats and a strike by the mine workers, but those were mainly Russians, the day (or at least, her father's business) saved by the Kirghiz. She also speaks of anger and outbreaks by the people in 1905, the time of the Russian Revolution of 1905. She is out of there before the serious revolution arrives, but even in 1908 she foresees the future. In writing about the “out of the way corners of Russia,” where old traditions live on, she writes about these people, “The village & all the land round belongs to them, all the peasants wear the old national dress they have worn for hundreds of years; this is a chance to see it all before the ideas of the Revolutionaries change it all as they will before long.” Her father also founded the town of Fellsmere in Florida, and she provided the funding to establish the Marian Fell Library in that town, which still stands today. $5,750.

This is one of the earliest road maps of America. It was created in 1765 on behalf of Massachusetts Governor Francis Bernard (it was passed on by descent from his family in England). The map was the work of surveyor and mapmaker Francis Miller. It is titled on the map A Plan of the Road from Boston to Penobscott Bay. Penobscott Bay is in what is now Maine, and this road is eventually what became Route 1, running all the way south to Florida. Reese says there are no known road maps as detailed as this prior to 1789 save for two shorter ones from New Jersey. This maps notes towns, mileage, and rivers along the way. The English victory over the French in the French and Indian War opened up Maine for English settlement, hence the reason for creating this map. Item 8. $175,000.