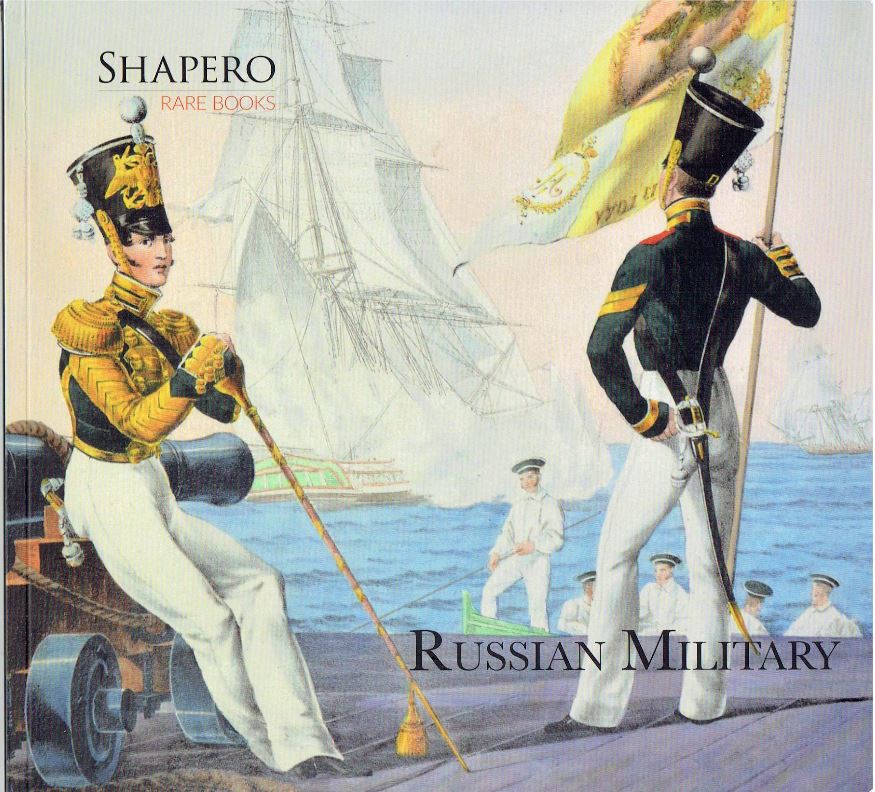 Shapero Rare Books has published a catalogue of material relating to the Russian Military. This catalogue contains books and maps pertaining to its subject matter, with outstanding illustrations being a second common thread. The Russians have been engaged in many wars, won some, lost some, but one thing we can say is they always had exquisite uniforms. They would have always won the contest for finest uniforms. Here are a few selections from this new catalogue.

We begin with Brief Remarks on the Character and Composition of the Russian Army, and a Sketch of the Campaign in Poland in 1806 and 1807. It was written by British army officer and diplomat Sir Robert Wilson and published in 1810. This was the period of the Napoleonic Wars, a time when various coalitions formed against Napoleon's France. To Britain, it was all one big war. While her coalition partners changed along the way, Britain was a constant against France. The war in Poland was against the Fourth Coalition, with Russia, Prussia, Saxony, and Sweden joining Britain in the fight against France. Wilson was in Poland and at Eylau for that battle. By the end of it all, Russia sued for peace and dropped its ties to Britain, while most of western Europe fell under Napoleon's control. Napoleon was reaching toward the high point of his empire. That would come against the Fifth Coalition, followed by Napoleon's defeat by the Sixth. Item 5. Priced at £600 (British pounds, or approximately $775 in U.S. dollars).

Next we see the Napoleonic Wars from the point of view of someone who traveled with the French. It also comes from the other end of those wars, when everything turned on Napoleon. Albrecht Adam was a Prussian who was the official artist of the Grand Armée during its assault on Moscow in 1812. Item 10 is 24 croquis pittoresques dessinés après nature dans la Russie en 1812 [bound with] 28 Plates from Voyage pittoresque et militaire de Villenberg en Prusse jusqu’à Moscou, published 1820-1833. The title translates to picturesque sketches drawn from nature in Russia, and there are such landscape drawings here, but others pertain to the war, which is hard to think of as “picturesque.” Adam was there for the Battle of Borodino, with more casualties than any other battle in that war, or any other war until World War I. After a long bloody battle, Napoleon finally achieved a “victory,” but only at an enormous cost to his forces. Meanwhile, the Russian army was able to escape. Napoleon went on to Moscow and occupied it, but the Russian army remained on the outskirts, and as winter set in, French supplies dwindled. They were forced into a brutal retreat through the winter while the Russians sniped at them, decimating their army. Adam returned to Munich before the massive retreat, escaping the worst part of the defeat. £15,000 (US $19,387).

Here is another war that makes you wonder, was this really necessary? This is from the Crimean War, and this time, it was Russia that was alone, France allied with Britain and the Ottoman Empire in opposing them. It had to do with religious liberties and boundary lines of the declining Ottoman Empire. The defining event was the Siege of Sebastopol. Sebastopol was home to the Russian fleet on the Black Sea, making it a threat to the Mediterranean. The siege began in October of 1854 and continued for 11 months before the allies finally drove the Russians out. The war ended soon thereafter. The Russians were not allowed to house a fleet there as terms of the peace, but otherwise, everything essentially returned to where it was before, except for those who died or were permanently injured as a result of the years of fighting. Item 26 is A voice from within the walls of Sebastopol: A Narrative of the campaign in the Crimea, and of the events of the siege, by Capt. R. Hodasevich. Hodasevich was a Polish man forced by the Russians into their army. He switched sides and provided valuable information to the allies. £950 (US $1,228).

This is a unique, manuscript album created by the Russian Artillery and Engineering Gentry Corps in 1800. It carries the bookplate of Tsar Alexander II, though Shapero believes it was more likely given to Tsar Paul I who was succeeded by Alexander the following year. The Russian title translates to A book containing drawings of the currently used artillery guns with their accessories. The album consists of 95 watercolor drawings of artillery created and signed by the cadets. Each drawing is signed by a different cadet. Shapero has located only one other similar manuscript book, one created a year later with 124 drawings housed in the National Library of Russia. Item 4. £250,000 (US $323,381).

Item 48, translated from the Russian, is The Tragedy of Admiral Kolchak. Alexander Kolchak was a Russian naval officer in the First World War who became acquainted with various western allied commanders. When he returned to Russia during the Revolution, he was asked by the White Russian leaders in Siberia to take command of the country. That he did, and received much support from his ally friends. However, that made many Russians suspicious. His conservative views lost the support of non-Bolshevik socialists. Most of the area he commanded fell to the Red Army, Kolchak was captured and executed. The author of this book, Sergei Melgunov, was a Russian historian and opponent of the Soviet government. The account was published in 1930. £250 (US $323).