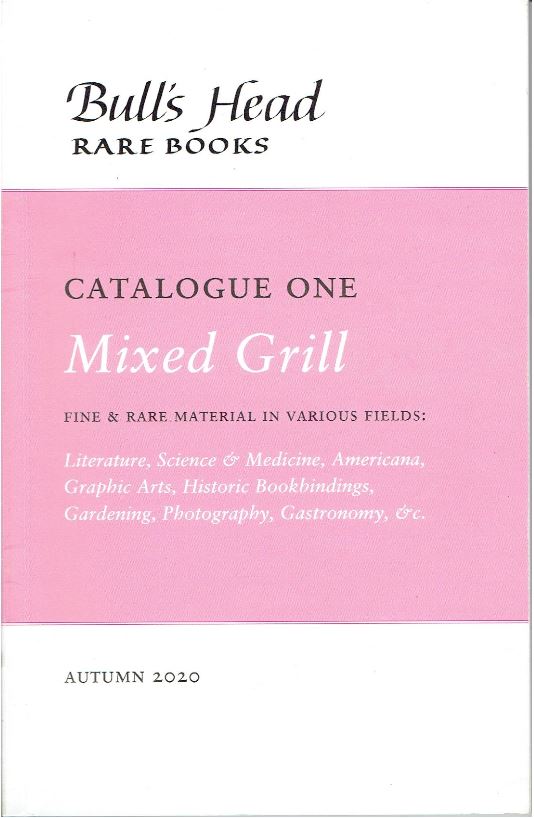 This catalogue is a first, Catalogue One Mixed Grill from Bull's Head Rare Books. Located in Mountainville, Lebanon (borough), New Jersey, Bull's Head opened just this year. 2020 must be a challenging year for opening a new business. The proprietor is Alex Obercian, a veteran of the book trade in New York City. As to what is in a mixed grill, it can be anything. We will let the catalogue's subhead describe it, Fine & Rare Material in Various Fields: Literature, Science & Medicine, Americana, Graphic Arts, Historic Bookbindings, Gardening, Photography, Gastronomy, &c. In other words, books (and ephemera). Here are a few of these varied items.

Lord George Byron was a poet, for which he is remembered, but also a (English) Whig politician of the early 19th century. His best known poem is Childe Harold's Pilgrimage. Item 14 is a letter he wrote to Lady Holland, wife of a Whig politician who held court at Holland House with important figures in the party. Byron was close to her and her husband. On December 29, 1815, he writes, “Lady Byron is much obliged by your enquiries & both she and the little girl are going on as well as possible. I am very conscious 'of being indebted to you” and always shall be.” This is Byron's first mention of his newborn daughter in a letter. While all may have sounded well domestically, it obviously was not. A month later, his wife left for her father's house, taking their daughter, and began separation proceedings, claiming Lord Byron was insane. After that, Byron up and left England, never to return. He never saw his wife, nor his daughter, again. His daughter, Augusta Ada, grew up to be Countess of Lovelace and is noted for her early work with Charles Babbage, developing the precursor to the computer. Priced at $12,500.

Next we have volume 1, numbers 1-6 of The Leaflet, edited by George O. Smith, and published in Augusta, Maine, from June 1884-January 1885. If you have never heard of The Leaflet, don't let it make you feel ignorant. No one else has. It comes from that 19th century transitory form of publication known as the Amateur Newspaper. The first was published early in that century, but they did not reach their zenith until the final decades of the 19th century. The amateur paper was usually only a few pages in length, published for the pleasure of their publishers, not to make money. The publishers were overwhelmingly teenagers to young adults, mostly males. They were originally printed for family or friends, some eventually reaching a somewhat wider audience, and often exchanged for other amateur newspapers. A few were printed by serious printers, but the field grew rapidly with the invention of the cheap, personal hand press. One might think that with a group of youthful publishers the papers would be daring, controversial, filled with the thoughts of the rebellious youth of the day. The reality is that most were quite banal. This one contains news about country life, fishing, baseball, some short stories, and what increasingly became a topic, discussions about other amateur newspapers and publishing them. This one has an account of the semiannual convention of the New England Amateur Press Association held in Portland. The final issue notes, “This will probably be the last issue of an amateur paper we shall ever publish.” Inevitably, most amateur newspaper issues are very rare. While the amateur newspaper has long since disappeared, its spirit lives on in blogs and other forms of internet publishing. Item 1. $300.

Item 44 is The Journals of Madame Knight, and Rev. Mr. Buckingham, written in 1704 and 1710, but not published until 1825. The more interesting is that of Madame Knight, not until several years later identified as Sarah Kemble Knight. She was a recently widowed woman of 38 in 1704, a woman of various occupations, copier of legal documents, operator of a boarding house, later a tavern and inn, and land speculator. Those were unusual accomplishments for a woman in that era. Still, she would have been long forgotten to time were it not for this journal she kept of a journey from Boston to New York to settle an estate. There were no roads as we know them in those days. She had to hire a guide to lead her along the rocky and dangerous road, fording numerous rivers, her thinking she would be swept away. The inns where she stopped were often barely tolerable for sleeping, the food at times inedible. Nevertheless, she plowed forward and did not lose her sense of humor, which, along with sarcasm, is found throughout her account. It is one of the best looks at travel along this route, through the wilderness that was Connecticut in colonial times. To look at the positive, traffic was not nearly as bad as it is on I95 today. Nothing else is known of Mrs. Knight's writing and this was only recognized and published a century after she died. Rev. Buckingham was a Hartford minister who accompanied two military expeditions to Canada. $2,500.

Item 9 is an important work in the field of women's rights. The title is Address on the Medical Education of Women, the 1856 publication of an address given by Elizabeth Blackwell. She was the first woman to receive a medical degree in the United States or modern Europe. She applied to numerous medical schools and repeatedly was turned down until accepted at Geneva Medical College in upstate New York on a vote of its male students, perhaps as a joke. In her address, Blackwell advocated the training of more women doctors, arguing the traditional role of midwife failed to make full use of their capabilities. She went on to found the New York Infirmary for Women and Children, and later a medical school to train women physicians. $1,500.

This is a biography of a remarkable woman: Narrative of Sojourner Truth, a Northern Slave, Emancipated from Bodily Servitude in the State of New York, in 1828. It was written by Truth and fellow abolitionist Olive Gilbert. Gilbert had to do the writing as Truth was illiterate. Born into slavery in what is today Rifton, New York, in 1797, she never received an education. But, she was smart and a powerful speaker. She had a calling when she was well into her 40s and became a preacher and speaker, and evidently a spellbinding one. If words alone weren't moving people, she could sing too. Despite being a member of two groups whose intellect was generally treated with disdain, an African American and a woman, she became a powerful voice for emancipation and women's rights. This first edition, published in 1850, and the following editions helped to support her in her work and through her long lifetime. Item 71. $8,500.