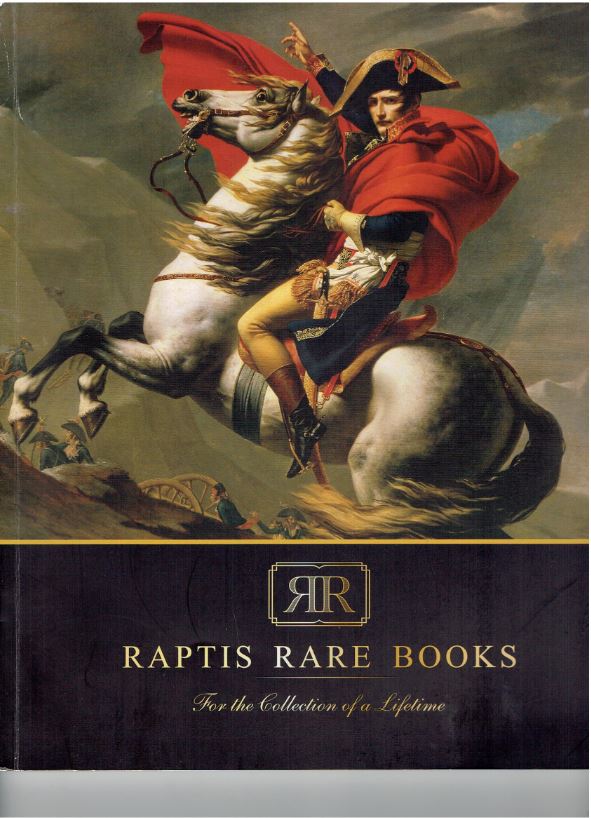 Raptis Rare Books has issued a new catalogue of books for those who collect at the highest level. These are books that you know, important titles in literary history. There are also some ephemeral items, such as personal correspondence and manuscripts of great writers. Raptis provides a table of contents in their catalogues to make it easier to understand what sort of material is available. Here are the categories covered this time: Ancient History, Philosophy & Religion, Travel & Exploration, Americana, Science & Natural History, Modern History & World Leaders, Literature, Economic & Political Philosophy, Children's Literature, and Fine Art. Here are a few samples of what you will find.

In 1920, F. Scott Fitzgerald was an unknown writer with a few short pieces to his name when he published his first novel, This Side of Paradise. It looks at the “Lost Generation” which emerged after the First World War. It combines failed romances, social climbing, and greed, issues that would become rampant during the Roaring 20s, and that would soon tear apart Fitzgerald's own life. It would not end well, despite Fitzgerald's literary success. This copy was inscribed by Fitzgerald in 1936, “For William Henneman – with best wishes – this old old book; the sight of it reminds me all too dramaticly [sic], that I'm almost forty.” We are not able to identify this William Henneman, but he must have had some good literary connections as we also found a record of a book inscribed to him in 1937 by John Steinbeck. Item 90472. Priced at $22,500.

This book was published almost five centuries ago, but it was still written much earlier, by about two millennia. It takes us back to ancient Greece and the fifth century B.C. The title is The Hystory, Writtone by Thucidides the Athenyan, of the Warre, Whiche was Betwene the Peloponesians and the Athenyans, better known as The History of the Peloponnesian War. This is the first edition in English, published in 1550. Thucydides was a Athenian, but was noted as being a true historian, not just a promoter of his side. Indeed, many consider him the first true historian, attempting to write historically and scientifically accurate accounts of the past. He wrote as the war between Athens and Sparta proceeded from 431-404 B.C. He believed a retelling of the past was essential as he thought, long before the expression came in vogue, that those who didn't learn from the past would be doomed to repeat it. Item 111546. $32,500.

This book has been printed in over 10 million copies, but this is the one-of-a-kind original. Shel Silverstein's The Giving Tree is one of the most popular and acclaimed children's books ever written. It is also one of the more controversial, its exact meaning debated. It is the story of a young boy who befriends a tree. He climbs her branches, eats her apples, and has a wonderful time with his friend. The tree's greatest joy is in making her friend happy. As the years go by, the boy grows up, visits the tree less often, and then only because the tree continues to give him things, apples when he is hungry, her branches so he can build a house, her trunk for a boat. By the end, both are aged, the “boy” now a decrepit old man, the tree but a stump. The tree can no longer give to the “boy,” but he no longer can use those gifts anyway, other than the stump for a place to sit and rest. But, the tree is happy to still be able to do this. The story has received various interpretations. The tree seems to represent unselfish love, the boy quite the opposite, but what is the message (presuming there is one)? What Raptis has to offer is the true first, Silverstein's original manuscript. It is marked up with his drawings and corrections. One notable change is the ending, which he changed from “and the boy and the tree were happy” to just “and the tree was happy.” The boy is never satisfied. Item 116388. $125,000.

“Widely considered the greatest novel ever written” is an impressive introduction to this book. I wouldn't want to argue with that point of view. This is the first American edition of Leo Tolstoy's masterpiece, War and Peace. It is a lengthy and detailed look at Russia during the Napoleonic Wars, a nation struggling to survive an attack on its existence. Tolstoy presents a wide range of characters, a complexity you might think would make the book hard to follow, and yet they all have their place and weave understandably together. It truly is as great as Raptis says. This lengthy novel comes in six volumes. Item 115458. $8,800.

This next item is as short as the last one was long. It is not a book, rather, a birthday note. The writer was Vice-President and future President George H. W. Bush. The recipient was President Ronald Reagan. Addressed “Dear Mr. President” and dated Feb. 6, 1984, Bush writes, “Barb and I sing 'Happy Birthday to you' – with many happy returns! All Bushes join in – George.” Bush lost the primary election to Reagan in 1980, but accepted the latter's offer to be the vice-presidential nominee. Bush would succeed Reagan after winning the presidential election of 1988. Item 114005. $7,500.